This week at Pluma Lodge we had nine guests: Enrique, Puma, Roman, Luis, Ruben, and Alejandro, six longtime Argentine friends; Will and Josh from the U.S.; and Neill from the U.K.
Huge rains hit us on the first day, and we ended up with a flooded river for about a day and a half. Fishing remained tough for another two days due to the very sudden change of watercolour and high water, but the group accepted the challenge and had a great time.
After dealing with tough conditions, we wrapped up the week with good fishing, especially on the upper sections, with four fish over 20 pounds landed, and four nice Pacu too.
The lower sections were very much affected by the flood, but we had a productive last day in which Ruben landed a 20-pound Dorado and one Pacu.

This week at Agua Negra we welcomed Scott and Bill — two friends who have been fishing together for many years — and Richard and John, anglers from France and the U.K.
We had a big rain at the beginning of the week, which made the river water high and off-colour, and for this reason, we focused our attention on the tributaries.
The fishing was good, even with the high water, and we landed some really nice Dorado.
By the middle of the week, the Agua Negra and the Secure started getting better, and the fishing was very good. We ended up landing more than 10 fish over 20 pounds as well as two Pacu and some nice Yatorana on dries!
The biggest fish of the week was caught by Bill, and it was a 30-pound Dorado on the Secure River.

This week at Secure Lodge we welcomed a nice group of anglers, It was also nice to have well-known angler Marina join us.
The week began with a very good first day followed by heavy rain the next night. On the second day, the temperature dropped, and the water levels increased, giving us two days of muddy water.
Despite that, conditions recovered during the second half of the week, which gave everybody opportunities to catch Dorado, Pacu, and Yatorana.
We all had a great time, and all of the guests were able to catch their first Dorado on the fly, and we even continued to catch them on dries! Among other highlights, in Ashahana Creek, we witnessed incredible feeding frenzies and a 22-pound Pacu caught on a small streamer. 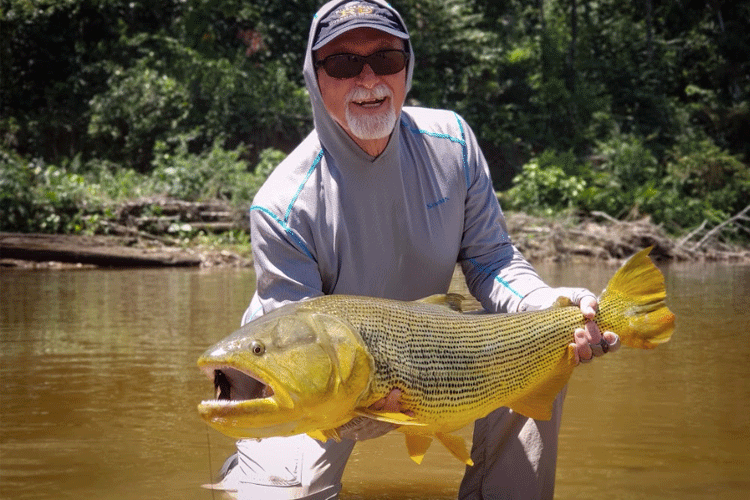