Like learning anything new, it can be quite intimidating when you first decide to dip your toe in Spey Fishing For Salmon. It shouldn’t be! After all, Spey fishing is just another fun way to fish. It’s not better or worse, harder or easier, simpler or more complicated than ‘normal’ fly fishing.

If you love your fly fishing you will love getting into this. Below are some of the questions that quite often get asked when people are interested in trying out this method. I am sure there are millions of other questions and I for one would love to hear your comments and advice.

What is Skagit casting?

Skagit casting is a type of Spey casting that was developed on and around the Skagit River in Washington State.  Skagit casting uses fairly short, fairly heavy lines that are good for casting big flies in big sections of the river.  In the Pacific Northwest, it’s the most popular form of Spey casting, as of 2013 at least.

How do you say ‘Skagit’?

It’s a coated, tapered leader used mainly in Scandi casting (more on that below).  They come in different sink rates, just like sink tips do.  ‘Polyleader’ is the term that Airflo uses; ‘Versileader’ is how Rio says it.

What is Scandi casting?

Scandi is short for Scandinavian.  It’s a type of Spey casting that generally uses lines that are a little longer and a little ‘thinner’ than Skagit casting, and it’s more appropriate with smaller flies.

Which hand goes on top?

Usually, right-handed casters have their right hand on top.  Some anglers (who are more coordinated than we are) can fish with either hand on top. 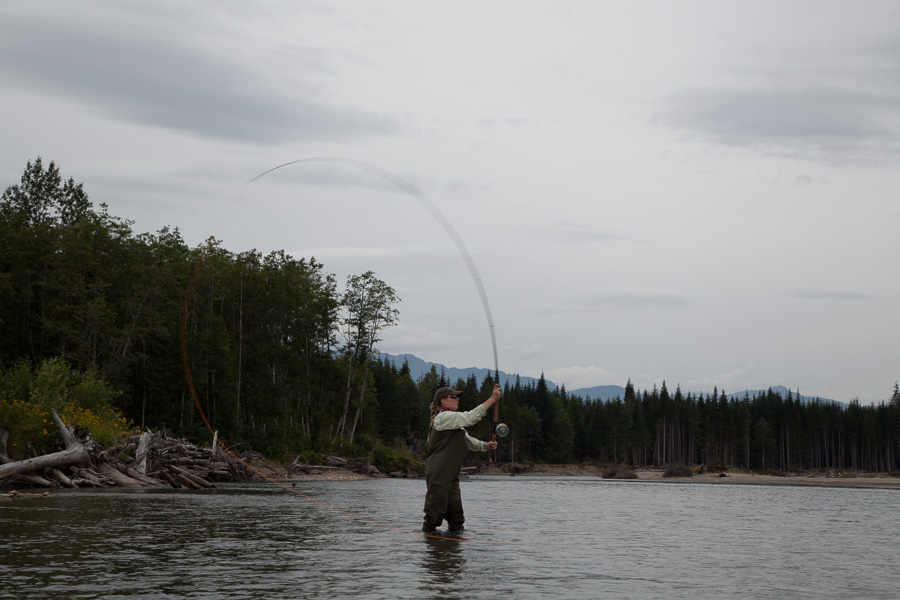 Poke is short for the Perry Poke, which is a Skagit-style Spey cast.  It involves ‘dumping’ your line on the water in front of you before you cast, so it looks pretty strange the first time you see it.

Why do you make all those extra moves in your cast?

Most Spey casts involve a couple of steps and it might seem like there’s a bunch of wasted time and energy compared to just a simple forward and backcast.  The early steps in a Spey cast are just there to get your line and your fly in the right position for the final forward stroke in the Spey cast, which is really just a big roll cast.

Why are you always talking about ‘grains’?

Different types of Spey casting use different weights of lines, even on the same rod.  There’s also a lot of personal preference in which weight line goes on which rod.  So it’s often not as simple as saying ‘Buy a 7 weight Skagit line for your 7 weight rod’.  Lots of modern line systems – especially Skagit systems – have totally abandoned the idea of calling a line a ‘7 weight’ or an ‘8 weight’.  Instead, they refer to the actual weight of the head, in grains (15.4 grains is 1 gram).  It sounds more complicated than it is – it’s really just a simpler way of talking about lines, by saying how much they actually weigh.

Should I try it?

Yes, you should.  It’s really fun and there’s no reason to be intimidated. We’d recommend taking a casting lesson on your first day – both to learn the fundamentals and to make sure your rod and line are set upright.  If you’d like a recommendation on who to contact about a lesson in your area, leave us a comment below and we’ll point you in the right direction!

If you fancy going on a trip but have limited or no experience in Spey casting, do not worry as we run hosted trips each year to various destinations around the world. Our hosts and guides on hand will be there to assist and teach you everything you need to know.

If you are interested feel free to call me on 01603 407596, you can even join me personally on a trip. Alternatively, view all our Salmon fishing destinations.

How many times have you heard the saying, “a thinking angler catches more fish?” It’s a saying that gets used a lot, but unfortunately, It’s not given much attention. Swinging For Kings – The Broadside...
Read More >
Stay in Touch
Sign Up To Our Newsletter
Sign up to our weekly newsletter to get the latest travel advice, offers and adventures.
Sign Up Now
Request A Brochure
Our inspiring, free brochure is packed with incredible travel inspiration from every corner of the planet.
Request Now
Submit An Enquiry
Our experienced team are always on hand to help you with any questions or advice you need.
Enquire Now