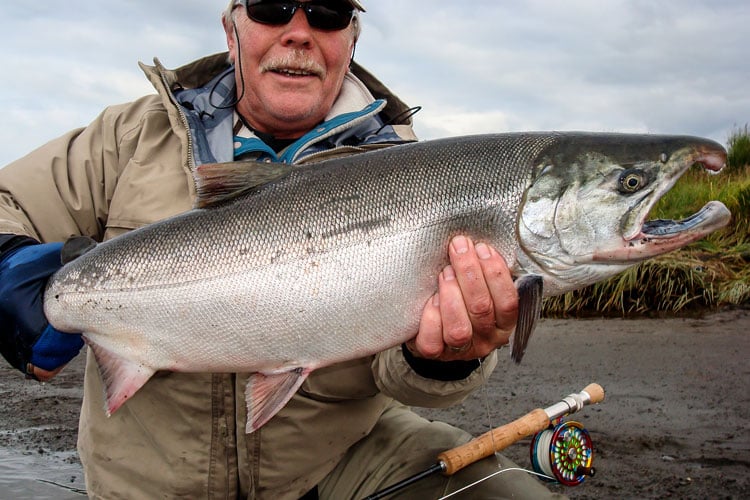 As their common name would suggest, when Coho enter the rivers to start their breeding migration they tend to be bright silver with darky blue upper backs. The longer these fish spend in fresh water the more they start to change. The fish start to change to a darker colour before turning red. It is when they are in the freshest condition and bright silver they are considered the best sport. Silvers/Coho’s are an amazing fish to catch on the fly, it’s like crossing a Salmon with a Tarpon because when hooked these fish spend as much time jumping out of the water as they do in it. They twist and turn and give great runs, all in all they are a great fish to catch.

Coho Salmon run in huge shoals and average between 8 to 16lb. However, every now and then there are a few fish that have overwintered at sea for an extra year or two and these grow up to 31lb.

The range of Coho Salmon is huge. They can be found on both sides of the Pacific, the Pacific Northwest area of North America, Alaska, Japan and Russia. Nearly all rivers will have a run of Silver’s, some more than others, so it is always good to take advice on where to fish. Some of our favourite places to fish for Coho Salmon include Togiak River, Naknek River, Kenai River, Kanektok River, Kvichak River, Ayakulik River, Kasilof River and the Goodnews River.

In Canada, the main rivers are the Skeena River and Fraser River, but there are also many more. One very important point for fishing for Silvers is the date, you need to be at the right river on the right weeks. Not all rivers have the peak run in the same weeks.

Silvers are a great fish to target with a fly. An 8# fly rod is all that’s needed and you can fish with either single handed or double handed rods subject to your preferred choice and river conditions. There are two methods of fishing with flies. The first is swinging flies. With this method you cast slight at a downstream angle, let the fly sink and then let the current swing the fly across the river. You can also give a few twitches to make the fly look even more enticing.

The second method is popping an /or skating flies across the surface. It is the same cast and method as the above, but this time you are using a floating line and flies that create a wake on the surface as the drag across the surface of the water. This is an amazing method to fish and one that is also very exciting!