Getting in to the Zone of Atlantic Salmon

Getting in to the Zone of Atlantic Salmon

As anglers, we should always be learning for you will never know it all, but if you think you do, it will not be long before a fishing trip teaches you otherwise.

I am in a fortunate position as my job takes me travelling all over the world fishing for a wide variety of fish using many different methods. One thing all this fishing has taught me is to never stop thinking and to always put myself in the fish’s mind. Some of you might be thinking what the hell is he running on about now? Put myself in a fish’s mind? What I mean by this is to start to try to think like a fish. Ask yourself questions such as: If I was a Trout, Salmon, or a predator, where would I be in the river? Why would I be there and when would I be there? Try to picture what may be going on under the water.

It’s these kind of questions that start to make you question everything about fishing and consequently how you are fishing. Let me be frank, if you are not questioning yourself you are not really fishing, you are merely going through the motions. Yes, you will still catch fish but ever wondered why some anglers always seem to catch more than others? Luck? … No, in fishing you make your own luck.

A thinking angler really comes into their own when the fishing is tough, let’s face it anyone can catch a fresh run, sea-lice covered Salmon that’s still in full hunting mode fresh out of the ocean. The real challenge comes when you are trying to catch a fish that has already been fished for, one that has become educated by seeing every fly you could ever imagine, or as on one of my recent trips to Quebec with horrendous low water conditions, the fish were lying deep in the pools. So how do we catch these fish?

On this trip I was fortunate enough to be fishing 2 rivers that are crystal clear, this allowed me to spot the Salmon and even sight cast to them. However, more importantly, it also allowed me to see the fish’s reaction to my flies, or in this case, total lack of reaction as is typical for Atlantic Salmon. The guides had never known such bad water conditions and apparently it was the lowest it had been for over 30 years.

I could see from the guides body language that they believed there was no hope as the fish catches over the preceding 2 weeks had been very tough. So, in the guides minds it was to put the customers in the pools and just let them go through the motions and hopefully they might just catch one fish during the week.

Along comes the thinking angler, me. I could see fish so I knew instinctively that we would catch fish, I just need to work out what we needed to do differently to make it all happen. One thing I had learned many years before is when fish are what I call soft i.e. not aggressive, their zone is much much smaller. Now, what do I mean about ‘zone’, imagine a fish has a zone that extends from its nose and this zone is a cube, so for an aggressive fish the zone may extend to the limit of its eyesight, 3 to 4 meters in front, left, right or above. If a fish sees potential food within this zone it will investigate further. Now on a soft fish, this Zone will be drastically reduced even down to as much as half a metre, so now you can see you have to make sure your fly is much much closer to a fish to entice a take. Hence why the fishing seems much harder.

Back to Quebec and as the rivers are so crystal clear and normally conditions are good for most of the season, the guides and therefore anglers only ever use floating lines with varying lengths of leader. It was obvious to me that I needed to be lower in the water as the Salmons zone was drastically reduced. At first, the guide said  ‘we do not use sink tips as you snag fish’

“we do not use sink tips as you snag fish”

I explained you do not snag fish if you fish them correctly and I promised that if I snagged a fish I would stop fishing for the rest of the week.  So, on goes a 5ft length of medium to fast sink tip and out goes the cast to 3 Salmon sitting in a nice little deep pocket. As the fly approached the fish they reacted, no they did not eat the fly they just moved position allowed the fly to pass through only to move back once the swing had finished. We moved the fish so nothing was wrong with the depth as we know we are in the zone, but what else to do? As the river had a lack of water the flow was not as strong as normal and the swing was not that fast, therefore the fish had plenty of time to look at the fly. So this time I cast at the same fish but as the fly got closer I started to twitch & pulsate the fly, this time the fish moved slightly but one broke off and followed the fly for a few metres.

What I have learnt over the years which applies to all fish and not just Salmon is forcing a fish to wake up and react, make a soft Salmon aggressive again. This time the cast was as before but as the fly approached I speeded up the swing by stripping line in as well as twitching the fly. This time two fish followed and followed for much further nearly until the end of the swing. It is amazing to be doing this in crystal clear water for if you were in Scottish rivers you would never know any of this was happening. This is why as a thinking angler you have to try and picture what is or could be happening under the water while you are fishing.

“as a thinking angler you have to try and picture what is or could be happening under the water while you are fishing.”

Although we are now in the zone and getting a reaction to the fly we still needed to try something else. Desperate times meant desperate measures. So out goes the same cast the same fly the same strip and twitch, again 2 fish follow but this time as they start to follow I strip as fast as I can…. Bang both fish charge the fly full of aggression and game on, we have a fine Salmon of around 11lb.

Now to say the face of the guide was not a picture would be a lie, he had watched all the events unfold and in traditional guide manner he walked up the bank to the next customer and said: “do you have any sink tips, and when you cast it out halfway through the swing trying stripping in your fly.” Wonder where he got that idea from?

So, when everyone put on a sink tip did it make a difference for everyone, sadly no, why because again they were just going through the motions, however in the right hand’s customers started to catch more fish. For me, I put 11 Atlantic Salmon on the bank and on the last day I had only 16 casts which resulted in 2 landed fish an 18lb fish and a nice 21lb fish.

The moral of the story is making sure you are in the zone of your Salmon, the normal above the Salmon fly swimming behaviour will get a Salmons attention but only when they are in an aggressive mood. The thinking angler who realises that they need to be in the fish’s zone and that this zone is reduced subject to how long a fish has been in the river and water conditions will catch more fish. Also, the angler who thinks like a fish and is prepared to change things up a bit catches more fish.

“the angler who thinks like a fish and is prepared to change things up a bit catches more fish.”

Next time you are Salmon fishing, after a normal cast and swing through, try the next cast with a bit more speed through the swing by twitching and stripping your fly. Try stripping in faster halfway through a swing, you might get some strange looks from your guide but persevere as you will catch more fish. How many times have you heard someone say I got a pull just as I was lifting the rod to recast, simple as they lifted the rod it pulled the line and increased the fly speed which enticed a following fish to strike

Welcome to the zone!

If you have any questions on any of our Atlantic Salmon trips we offer then contact us in the office, our team will be happy to help you with any queries you have. Additionally, you can request a free brochure.

We here at Sportquest Holidays offer a plethora of breathtaking salmon fishing experiences, we have created this wonderful list of our top 5 destinations for you to look at and hopefully assist you with picking...
Read More >
Top Atlantic Salmon Rivers in Norway 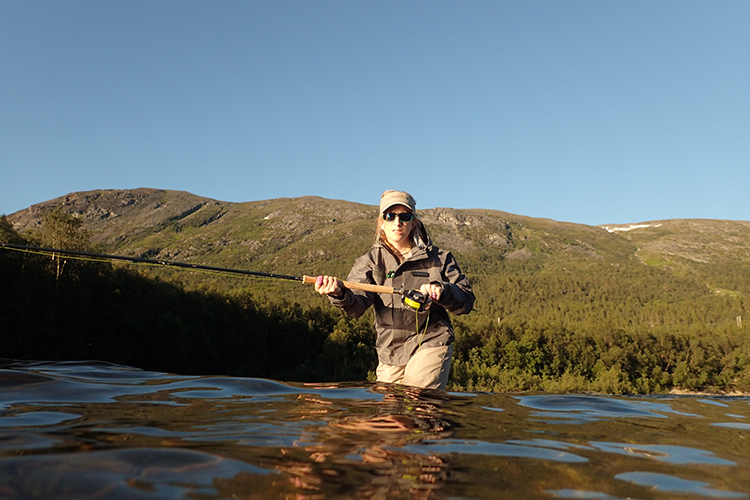 We are regularly asked about the top Atlantic Salmon Rivers in Norway. However, how would you gage and measure which are the top rivers? Do you measure by total numbers of fish caught? Do you...
Read More >
Tips For Caring & Storing Fly Lines

With just a little love you can keep your fly line performing like new, not to mention increasing the life span of a line you paid close to a £100 for. Remember a well-kept fly...
Read More >
Stay in Touch
Sign Up To Our Newsletter
Sign up to our weekly newsletter to get the latest travel advice, offers and adventures.
Sign Up Now
Request A Brochure
Our inspiring, free brochure is packed with incredible travel inspiration from every corner of the planet.
Request Now
Submit An Enquiry
Our experienced team are always on hand to help you with any questions or advice you need.
Enquire Now