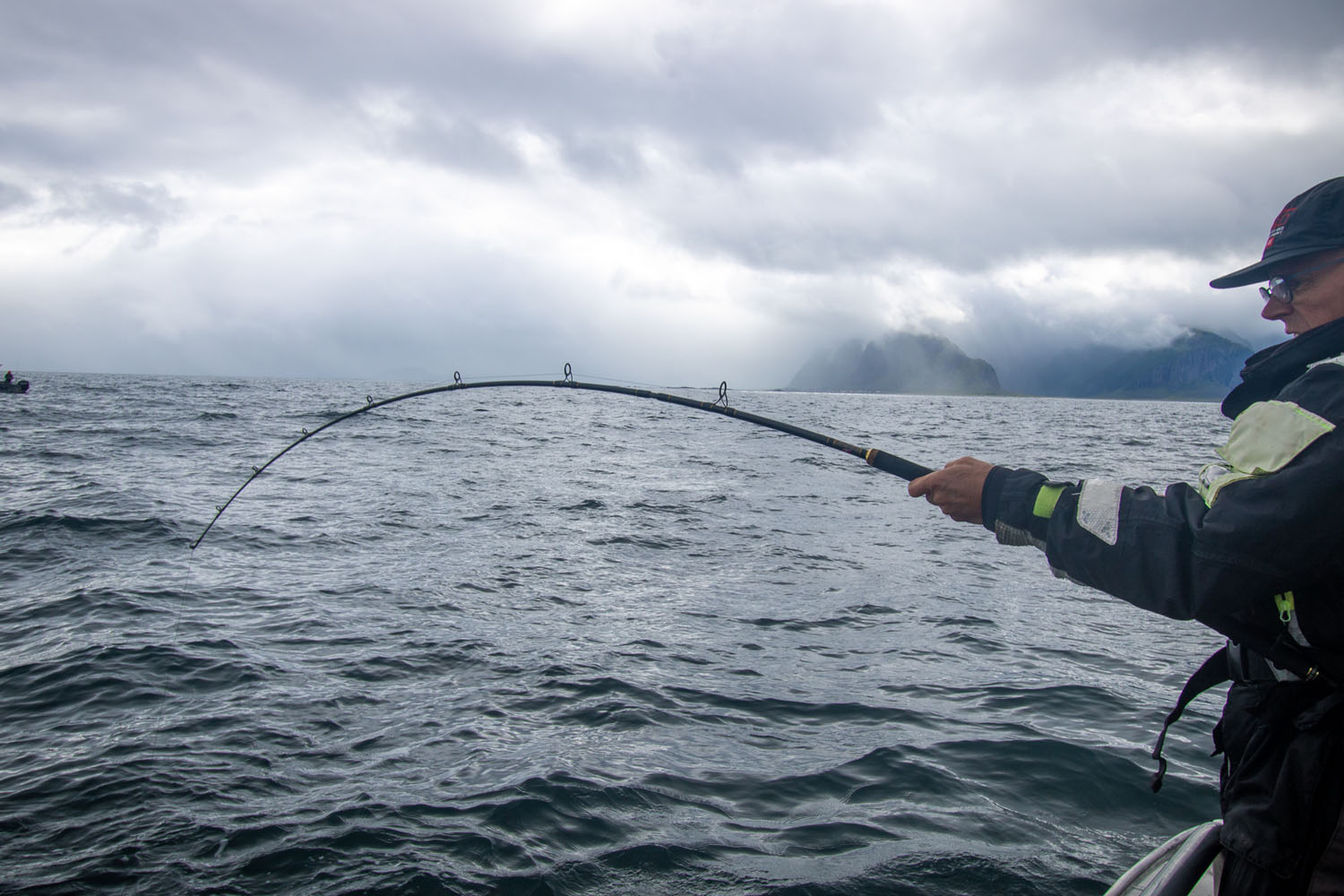 Then another week passed and we can sum up that we were incredibly lucky with the weather this week where we got out to sea every day, even if some days were a little windier than others. Also this week, the boat teams have focused on different species with nice catches distributed among the boats.

Thursday started with really nice weather so the boat teams went out on the north side in search of Cod and Pollock. It would turn out to be huge amounts of Coalfish out here but the Cod was all the more difficult to find. The boat teams kept in touch out at sea and when a boat found fish willing to bite, the other boat teams could quickly get there to take part in this fishing. Today’s top fish went to Bo, who weighed down the scale to 15 kg! Unbelievable amounts of Coalfish around 3-6 kg were also caught and Calle who steered the guide boat that day told about the largest of 8 kg!

On Friday, the weather offered summer heat and really nice winds. Even today it was difficult to find the Cod, but in the end Calle in the Guideboat made an effort to search for the fish in deeper water where he found a couple of nice ones with 12 kg and 15 kg at the top. These taken at our positions “Mushroom” and “Banana”. Once again, it pays to test different depths and locations to find the fish. What is good one day can be bad the next and vice versa. The winning concept for us has really been that we were able to communicate between the boats to help each other find the fish. The fact that our guides are on site and do everything they can to ensure that all guests at the camp are successful increases the chances considerably! The British in boat 3 also reported a small Halibut that was landed but regained its freedom.

On Saturday, the weather was so magically good with over 20 degrees of heat and a sea that was so inviting that the boat teams chose to run two long trips where one group targeted Halibut and the other for cod and pollack. The Halibut gang managed to land the largest of 127 cm and 110 cm as well as a couple of smaller Halibut. They say that the fish were very difficult to flirt with this day, but finally managed to land a couple distributed among the boats. To sum up their luck, they were satisfied and happy after an incredibly nice day at sea and Halibuting in the boat.

The other boat teams that went after Cod and Pollock reported that the Cod fishing was also slow at this location and that the shallows and escarpments adjacent to these held copious amounts of Pollock. A nice fishing as the seine is incredibly combative. Worth mentioning is that, after all, a couple of really nice Cod around 10-14 kg were landed, with a top of 17.5 kg, as well as some nice Ling as a bonus catch.

On Sunday, a group chose to test the relatively newly discovered Halibut fishing we previously wrote about. It would prove to be just as stable this time and it caught many nice Redfish up to 2.5kg. Perfect food fish and an incredibly beautiful fish to have on your CV. The Brits instead chose to try Plaice in the local area and managed to land 8 nice ones, the biggest of which were between 1.5 – 2 kg! A pleasant fishing with light equipment to say the least. Our guide Didrik had his parents visiting, so of course he took them out for some Cod and Pollock fishing here in Nappstraumen. After only a couple of hours of fishing, his mother Patricia had caught the biggest Cod of the day at 10 kg! A lovely experience to say the least for the Stavervik family. Our guide Johan skippered the guide boat this day and tells us about an incredibly tough morning where he searched for ground peak after ground peak and even went out into really deep water to find fish willing to bite.

He found many nice shoals with bigger fish in them but it refused to bite. Then it was like someone pushed a “Time-to-eat-button”. And all of a sudden, his guests were with both double and triple drilling with both Coalfish and fine Cod. It was an incredibly significant cutting period of about 2 hours. As soon as the current died again, the fish stopped biting again. But during this 2-hour period, there was non-stop action and the guests had to fill the boxes with fine Cod and Pollock between 3-7 kg, which are absolutely perfect food fish. The second boat with Bo Götesson behind the wheel, however, managed to lure up a top fish of a whopping 15 kg in the same spot. The only problem they had during this 2-hour period was getting past the Coalfish and down to the bottom where the Cod was. There were such incredible amounts of Coalfish that you really had to sneak down through the shoal to avoid hooking a Coalfish. I guess it’s something you call a luxury problem when there are too many fish in the sea.

On Monday, however, the wind turned and started blowing from the north again. Fishing was then limited to the Nappstraumen and the south side. The guide Johan took the British and boat 9 with Bo and the gang. They started fishing for Plaice and after a little while the guide boat was able to add up 4 nice Plaice and the British 3. However, Bo and the gang chose to fish further and landed around 7-8 with a couple over a kilo. The British then chose to go south sometimes as the guide boat spent a couple of hours fishing for Halibut in the local area, unfortunately without results. Halfway through the day, the gang chose to go ashore again to nurse their bad backs from yesterday’s 2-hour race. Driving slightly shorter days and just coming home and cracking a cold one on the terrace and looking out over the sea is at least as wonderful.

On the last day, many boats chose to sleep in the morning after yesterday’s tougher winds, which also remained throughout the morning. However, the afternoon would turn out to be really nice and a couple of boats tell of really nice fishing for both Cod and Pollock out on the first deep edge with the largest Cod around 10 kg. A nice end to a really nice week.
Although both cod and flounder fishing has been a little more difficult this week, most boats were still able to sum up a couple of really nice top fish and tell about days when it was almost difficult to get down to the bottom because of all the fish.

Now we are loading up for a new week here in Nappstraumen and the long-term forecast seems to promise some wind from the south/southwest direction, which is usually good for fishing. We sharpen the hooks and get ready!

I would like to take the opportunity to thank all the guests from this week and give a warm welcome to all the new ones!