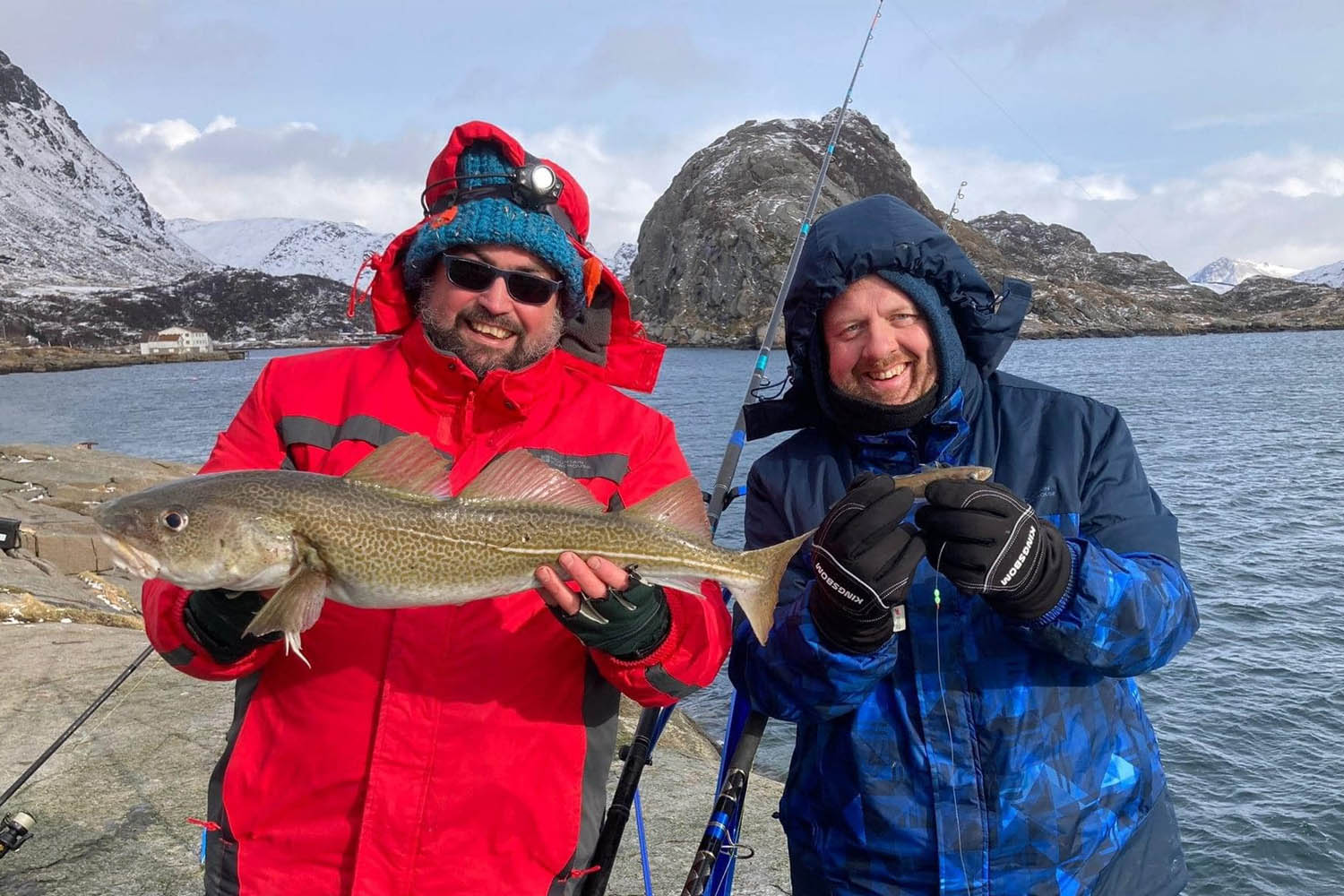 Well, the last group of keen anglers arrived last night, and they have a much more favourable forecast than the lads last week did. Hopefully, that’ll mean we see a few more decent fish caught amongst the smaller stuff, but it is fishing at the end of the day, and what will be, will be.

Today though, it was glorious outside, with sunshine in parts, very little wind and a nice crisp chill in the air. We chose to fish the Baitstation and Mortsund, so I could assess the lads’ abilities etc for later in the week. Fishing was OK, nothing spectacular by any means, with the catch being made up of a dozen or so Codling to 6.8lb, good numbers of Dabs to 1.12lb, four nice Plaice to 3.5lb, a couple of Wolfies and a lonely Halibut for Ian (His first I believe). Well done buddy!

Tomorrow, the plan is to stay local for the morning and then head north for the afternoon high. I’m fairly sure we’ll see a good few Cod and Haddock tomorrow. Let’s have it!

Due to the tides, we decided to split the day into two sessions, fishing fairly local for a few hours in the morning and then heading north for the afternoon high.

In the morning, we hit up Fredvang Pier. Bites were a plenty, but nothing big was making an appearance, with just a number of Codling to 2lb, the odd Dab and a Coalie. Time to head back to base and get sorted for the second session.

For the afternoon, we had four lads at half tide rock in Kabelvag and three at the Ice Factory in Svolvaer. Bites were aplenty on both marks, with some lovely Cod and Haddock caught. The best Cod were around 8-9lb and the Haddock went to 5+.

Tomorrow, it’s a split group with some of the lads heading to Tangstad and others to Mortsund. Let’s hope it’s another cracker!

It always amazes me how fast the conditions can change here in Norway.

Two days ago it was 5C, sunny, and there was no snow in sight. A switch in wind direction and skip 36 hours to today, and its -4C, overcast, windy, and the snow is over 1ft deep in places.

It really does make planning a few days ahead an absolute nightmare.
Of course, we have managed to get out fishing plenty during the last 48 hours. In fact, with a drop in the wind last night, it was decided that we’d go for a late one, hence the lack of report. I do love filleting fish at 01:00 am.

It has gone very quiet though. The Cod have all but disappeared during daylight hours and the small tides and weather changes are limiting where we can fish safely.

The highlight is undoubtedly a session for Paul on Cod rock last night. He landed a good haul of Haddock, a few Codling and the smallest Ling I’ve ever seen. With the rod banging all night though, it was a session he very much enjoyed.

Week 4 Day 5: The return to Svolvaer…

With the wind blowing at 30mph from the north, today was a prime day for heading into Svolvaer harbour. Not only does it offer shelter, it also regularly throws up some good bags of fish.

The lads fished hard again, between them landing a decent haul of Cod, Haddock, Coalies, Lumb and Dabs. Ian had a very good run from what could only be a Halibut as well, but sadly it managed to throw the hook before he could do anything about it. The two best bags and bragging rights went to David and Steven.

Both lads had multiple Cod of 5lb+ with a nice 11lb Lumb for Steve too, which he was buzzing about. On the whole it was a very enjoyable day. To top it off, I treated the lads to one of my Thai Massaman Fish curries. The 7 empty plates would indicate it we down rather well

With tomorrow being the last day of the week and the season, I asked the lads if there’s anywhere they’d like to revisit. It was most unanimously decided that a repeat of today would be the best option. So to Svolvaer we go once more.

Let’s hope that even better fishing awaits us!

Today was the last day’s fishing of the Spring season, and it was nice to end on a high. I always say, regardless of how good the fishing has been, if my group of guests leave happy with a smile on their faces, it’s a job well done. It’s safe to say that these guys are all going home with some great memories from a delightful yet challenging week’s fishing.

As mentioned yesterday, the guys decided to revisit Svolvaer again, hoping for a repeat of yesterday’s session. Today, it was a little different, especially weather-wise, with hour-long spells of heavy snow interrupted by glorious sunshine. The fishing though, was still pretty decent. Between the group, we landed Cod to just over 11lb, Lumb to over 9lb, Haddock to 4lb, a few Ling to 6ish and a Wolfy.

Of course, we then finished the week with the traditional beer and pizza night, which always goes down a treat.

With nothing left to do now in camp, I’d just like to say a massive thank you to all the guests that have visited Lofoten this Spring. It has been an absolute pleasure and I really hope we see many of you again in the future.

A big thank you also must go to Zac Harrow-Deitz, who helped me a great deal during his stay in camp. I want to wish him the best of luck when he takes over from me next Spring. I’m 100% positive he’ll do a grand job of introducing many anglers to Nappstraumen and have a good laugh in the process. Smash it mate!

We have now come to the end of the spring season on the shores of Nappstraumen – its been a fantastic season and even with some slight issues when it came to the weather.