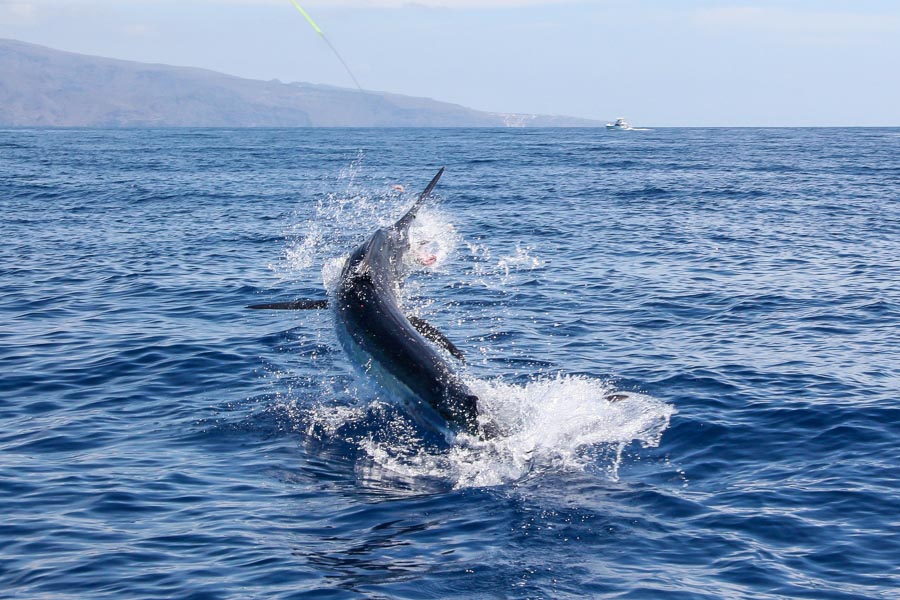 Top Tips To Help You Catch Billfish On The Fly

After ten years of learning how to help and teach fly anglers how to catch billfish on the fly, I have developed my own set of instructions and hints.

Have a 5-gallon bucket with about 2 inches of water in it placed far enough forward from the stern and as close to the rail as possible, to allow passage while waiting for the fish to attack the teaser. Let the rod rest with the reel suspended over the bucket and with the rod tip on the transom protruding no more than 2 feet astern.

Only strip enough line out of the reel for the cast, about 30 feet to the fly. Measure the distance with you standing against the stern corner and leaning out a little. Your fly will be located where you want the hook up to happen… up close and personal.

Time for a wet run…. The key to success is ‘rehearse, rehearse, and rehearse’ until you and the crew think you are ready for the real thing…

Here we are, the zone where the fish should be and the boat is at trolling speed. Your rod is ready and you aren’t paying too much attention. You’re drinking a drink, you’re eating a sandwich, and you’re talking about work. There is one teaser in the water and the mate has control… when suddenly the mate and/or captain are saying/ yelling, “Here he comes, here he comes. Viene! Viene! (Be-any, be-any)” That’s your cue You’re on!

1. Take a deep breath and let it out.

3. Walk to the very stern corner of the boat with the rod parallel to the water until you are leaning against the stern in the corner…. The casting line will follow you from the bucket and it will be ready for the water load, a one-shot cast. No false cast needed…. Make sure you aren’t stepping on the line or standing in a loop of it.

4. Toss the fly into the water making sure there is still line on deck, about half of the full cast distance of 30 feet. Keep the rod tip straight out or pointed slightly downward. Do not let all of the loose lines payouts into the water.

5. Hold the line with your stripping hand so the rest of the line doesn’t go out and focus on the incoming teaser… See the fishy? He’s behind it. It’s the big black thing with the pointy face and the blue neon flashers on its’ sides. As the teaser comes in don’t anticipate … wait until you hear… “Cast! Cast! Cast.”

6. Cast straight behind the boat, not at the fish or the teaser. Make an aggressive semi-sidearm backcast haul. Wait until you feel the fly and line load behind you and slam the forward cast so all the line is out of the rod and the fly makes a splash. I prefer to bring the fish as close to the stern as possible and pull the teaser as the cast order is given. I find this technique makes the fish turn as he senses the splash of your cast and the pop of your fly forcing it to approach and hit the fly from an angle. The fish is less likely to get behind the fly and bat it around. A side take is the best chance for a good stick in the corner of the mouth.

7. Pop it! Pop it… Pop 1-2-3, pop 1-2-3, pop 1-2-3… now stop the pop. Keep the rod low to the water grab the line at the stripping guide and pull it back…pop. While still holding the line firmly return your popping hand to the stripping guide and pop so the fly doesn’t skip out of the water but just enough to get the fishes attention. .. Do not strip the line in…. Pop 1-2-3 get the rhythm… this gives the fly line time to straighten back out and leaves no line on the deck to wrap around feet or the rod butt when the fish grabs it and you set the hook…. If the fish even looks in the fly’s general direction take one more pop and let it sit there for a few excruciatingly long seconds. Many an angler has popped just when the fish reaches its’ target.

8. Set the hook! Keep the rod low. Don’t anticipate the hit. When you feel the hit make a line set with one hand and bring the rod into it gradually all the while keeping the rod low. If the fish is coming from your left side to the fly, set to the left. If the fish is coming from the right, set to the right. I tell my fishers to set into the fish’s mouth. Once the fish is impaled get your hand away from the reel and let the drag do the work… add a little palm, and I do mean palm, to keep the hook in place until the fish turns and the barb is set… your knuckles and fingers will thank you.

9. Off to the races! Keep the rod low during the fight. At the hook set if you raise the rod it does a number of things. It changes the angle of the hook and doesn’t allow a straight-line set. Raising the rod also puts less rod power into the set because you only end up with a tip set. Not to mention that if the fish really doesn’t have the fly that it will be like doing a back cast right into the outriggers… game over for that one. When the rod is low and the line is screaming out, and the backing is screaming out and you are screaming out, keeping your rod tip low will provide more line drag, which helps keep the hook in place. The fish fights the line drag, the power section of the rod… the butt section… and your arm, hopefully wearing the fish out faster than you

10. Try to keep the fish on the surface. These pointy nosed, Goo-goo eyed, fish-breath devils are opposite reactive when it comes time for the hauling. You pull left and reel up the slack… they want to go right. You pull right then reel up the slack… they want to go left. You pull up… don’t pull up until the fish gets very close to the boat. Think of it in terms of being a down and dirty fight. Your arms will thank you later.

The Great Sailfish company is known worldwide as the best place to target billfish on the fly. Not only do they receive the largest run of Sailfish but they also see many Marlin each day whilst on the water. The Sailfish fishery in Guatemala has set so many world records for numbers of fish per day and each see’s them raise the bar just that little bit more to the point where no other destination can even come close to the numbers of Sails in one days fishing. This is why Guatemala is the must visit destination in the world to try your arm at fly fishing for the mighty billfish.

Palma de Cortez resort in Mexico is the ideal big game fishing destination. Not only is the resort located next to all the prime fishing grounds but all tackle is included too. On top of this, we now offer light tackle packages on all Panga boats for bait fishing which include all hooks, weights and leaders free for you to use. Onboard the big game boats you will have a captain and a deckhand to yourself, they will make your day as enjoyable as it should be.

The stunning eco-resort of Crocodile Bay set amongst the lush Costa Rican rainforest is known around the world for several different things, but mainly the world-class big game fishing. The boats we use are fully equipped with all of the top branded fishing equipment which is free to use. You will also find large cooler boxes full of cold drinks of your choice plus a huge variety of food freshly prepared at the hotel and loaded on to the boats every day. Another reason why this destination is so popular is the huge array of eco tours on offer meaning it is very family-friendly, one day you could be out fishing chasing down striking billfish and the next trekking through the amazing rainforest located a short drive away.

Kenya is the ultimate destination for big game fishing giving anglers the opportunity to catch record-sized fish. In the early days, it was made famous for being one of the best Sailfish destinations in the world and even more so to date with all the new fishing techniques practised for safe catch and release. Kenya’s coastline has been fished by many adventurous anglers such as Ernest Hemmingway who classed the Striped Marlin fishing as being the best there was.

Madeira has over the past years produced some of the worlds largest Blue Marlin, which can be seen by the results of the annual July 4th Blue Marlin World Cup. If you ever wanted a chance of hooking and landing the biggest Blue Marlin of your life, there is no better time than now.

La Gomera is the ideal big game fishing destination for anyone who does not like long flights. It is also perfect for a family fishing holiday as the island is packed with other attractions to keep the entire family entertained.  You will be fishing some of Europe’s most prolific waters for species such as Blue Marlin and massive Giant Bluefin Tuna. A big advantage of this fishing holiday is that all fishing tackle is included.

The Zancudo Lodge, where over 70 IGFA records have been set, is world-renowned for its lure and fly fishing inshore and offshore. You will receive access to all the required fishing tackle from ultra-light tackle to heavy fly fishing tackle with poppers, lures, jigs and small flies all included. All tackle is of a very high standard taking out the need for you to be carrying unnecessary amounts of luggage. Each day the fishing will be tailored to suit what you want to do and all of the relevant equipment is provided.