Sportquests Matt Crowe joined Paul Stevens on the April 2018 Mefjord Hosted trip, the article from this trip where some monster cod were caught was published by the brilliant Saltwater Boat Angling magazine. So make a cuppa, sit back and delve into the world of MONSTER COD AT MEFJORD

Cod, one of the main species of fish that holds pride of place in the UK’s saltwater angling hall of fame, tales are told from older generations of massive cod around our shores, 20’s and 30’s were common place with low double figure fish being looked upon as tiddlers. Things are a little different now, they no longer enter our waters in the numbers of years gone by, the Cod anglers from the UK now have to go further afield to find the sport of the past, one of the most popular destinations is Norway, the land of the Vikings and also some truly monster Cod!! 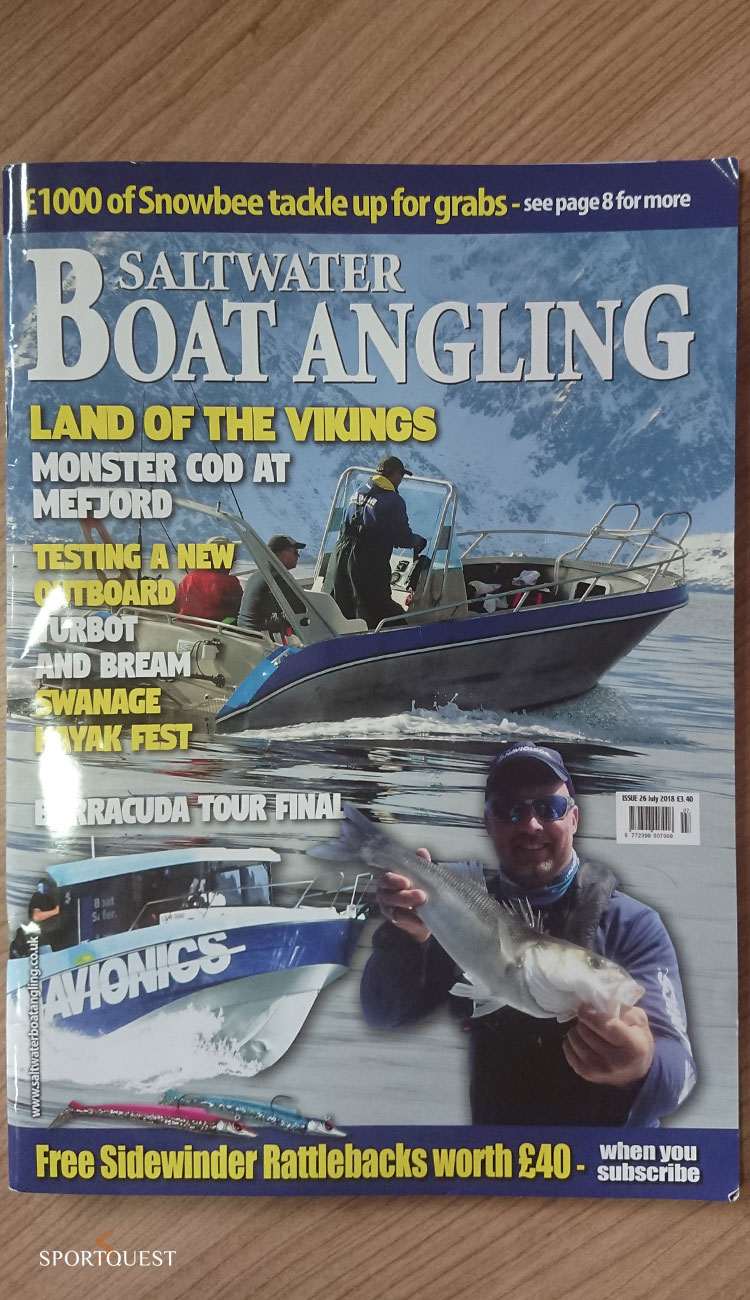 These Skrei cod are different to the resident coastal cod you will catch all year round, the word Skrei originates from the old Norse word meaning “The Wanderer” and this title fits these Cod perfectly. They swim from the Barents Sea to spawn on the grounds around Norway, giving anglers only a short space of time to catch them, normally from Jan to April. Now, don’t get me wrong catching normal Cod is still great fun and good sport but these are something else and knowing that underneath you could be a 50kg + leviathan really gets the juices flowing.

Arriving at Gatwick I met up with another angler Mark Thomas who had driven across from Wales to catch the flight with me, we were to fly to Oslo then catch an internal flight to Bardufoss where we would be picked up by minibus and driven a couple of hours across to the small village of Mefjord situated on Senja Island up in the Arctic Circle. This was going to be a serious trip, no messing around, the temperatures and conditions that far up can be unforgiving so some extreme cold weather gear is needed and my suitcase was at bursting point as I unloaded it at the camp. We had arrived in the dead of night so rather than have a look around we made our way into the apartments for some well needed shut eye, tomorrow was going to be a long day on the hunt for these huge beasts from the Barents Sea. 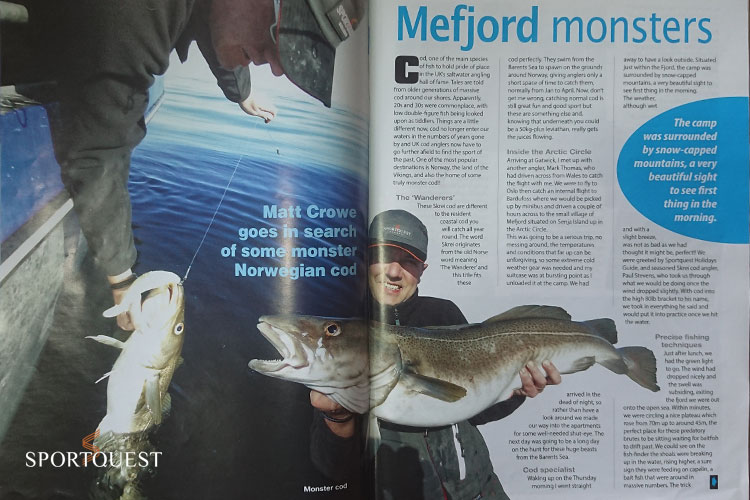 Waking up on the Thursday morning I went and had a look outside straight away, situated just within the Fjord the camp was surrounded by snow-capped mountains, a very beautiful sight to see first thing in the morning and the weather although wet and with a slight breeze was not as bad as we had thought it may be, perfect!! We were greeted by Sportquest Holidays Guide and seasoned Skrei Cod angler Paul Steven’s who took us through what we would be doing once the wind dropped slightly, with Cod to his name into the high 80lb bracket we took in everything he said and would put it into practice once we hit the water. Just after lunch we had the green light to go, the wind had dropped nicely and the swell was subsiding, exiting the fjord we were out onto the open sea, within minutes we were soon circling a nice plateau which rose from 70 metres up to around 45 metres, the perfect place for these predatory brutes to be sitting waiting for baitfish to drift past. On the fish finder we could see the shoals were breaking up in the water, rising higher, a sure sign they were feeding on the capelin, a bait fish that were around in massive numbers still. The trick to try and find one of the monsters that reside within the shoals is as follows, find the depth the shoal starts at and fish a few metres above it, the massive females are always above the main shoal. So if the shoal is showing at 40 metres fish at 37 metres, it sounds a bit too precise but trust me it does work…. Very well.

Weapons of choice for the trip were a 20lb class rod, either a fixed spool or multiplier reel loaded with 60lb depth marked braid onto which an 80lb metre long mono rubbing leader was attached and some truly monster shads to do the business down below. I was mainly going to be using the Big Bob shad in a variety of guises and weighing in at 730g this would be able to still sit just above the shoals if the tide flow picked up a bit too much that the lighter shads would be pulled up in the water. With the depth called out by Paul at 40 metres my shad was soon on its way down to the required zone, it took a matter of minutes until my rod was bent over, a Cod had smashed the shad and boy do these fish scrap well. A male fish of around 30lbs was soon on the surface and after a quick pic was released back over the side. This was how the rest of day 1 went for all 4 of us on the boat with both Marc Viercant and Stephen Evans catching fish to near 40lbs, we were back at the camp for 5pm, no monsters on the first day for us but on the other boat skippered by Mark Thomas an angler had pulled up a lovely fish weighing in at just over 70lbs, that’s more like what we were looking for and I think everybody went to bed that night full of high hopes for the next day. 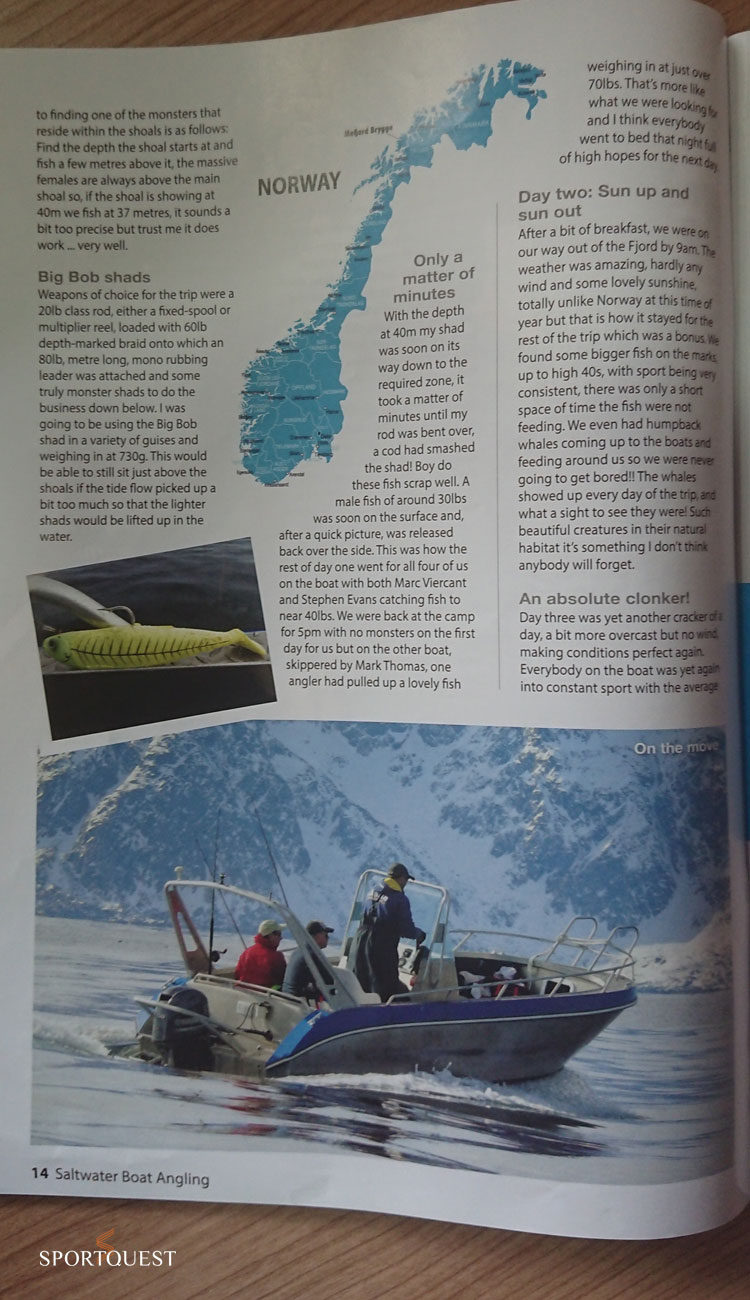 After a bit of breakfast we were on our way out of the Fjord by 9am on day 2, the weather was amazing, hardly any wind and some lovely sunshine, totally unlike Norway at this time of year but that is how it stayed for the rest of the trip which was a bonus. We found some bigger fish up to high 40’s on the marks with the sport being very consistent, there was only a short space of time the fish were not feeding but with Humpback Whales coming up to the boats and feeding around us we were never going to get bored!! These Whales showed their faces every day of the trip, what a sight to see, such beautiful creatures in their natural habitat it’s something I don’t think anybody will forget in a hurry. Day 3 was yet another cracker of a day a bit more overcast but no wind, making conditions perfect again, everybody on the boat was yet again into constant sport with the average stamp around 40lb when my rod absolutely slammed over and the drag started singing. This fish felt good and she really didn’t want to show her face on the surface, after a very good fight I could see her rising from the depths, an absolute fatty that once onboard went a clonking 55lbs, a big PB for me and seeing her swim away made it even more enjoyable. All the boats were getting into some great sport with some big fish being caught by everybody.

The weather was yet again beautiful on day 3, no clouds and bright sunlight meant the cod were playing hide and seek for a bit of the day, with our guide having to work hard to find the shoals but once he did we were yet again into some great sport, no massive fish but with an average stamp around 30lb nobody was complaining at all and to be honest it was nice to give the arms a little rest from pulling the biggies in. With some cloud showing in the sky on day 4 we thought the fishing may be a bit better and we weren’t wrong, we were soon into more nice high 40lb fish with yet more fish coming onboard to the mid 50lb mark, we were treated to an amazing spectacle in the afternoon with the baitfish up in the water the Coalfish were smashing them from below and then the Humpbacks would come right up in the middle of it all taking enormous mouthfuls of food, this was nature at its best. 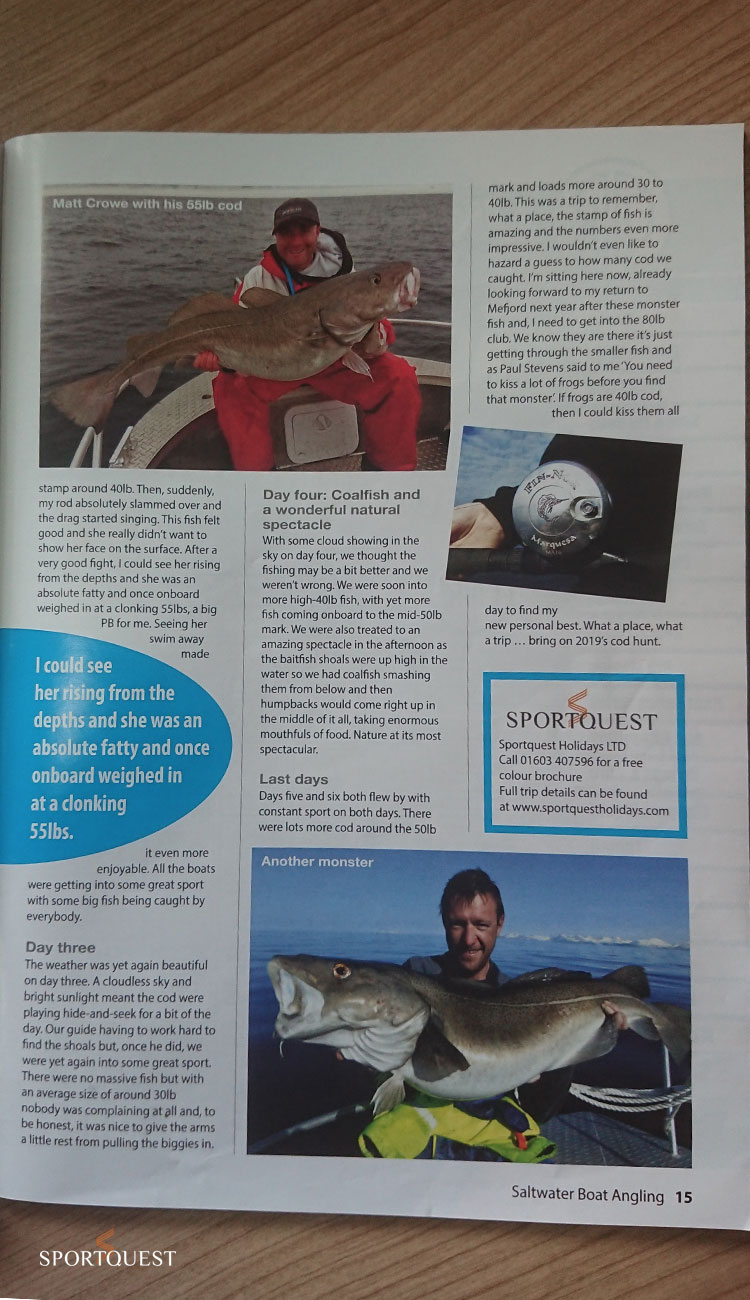 Days 5 and 6 both flew by with constant sport on both days, lots more Cod into the 50lb marker and loads more around 30-40lb, this was a trip to remember, what a place, the stamp of fish is amazing and the numbers even more impressive, I wouldn’t even like to hazard a guess to how many Cod we caught. I’m sitting here now already looking forward to my return to Mefjord next year after these monster fish, I need to get into the 80lb club, we know they are there it’s just getting through the smaller fish and as Paul Stevens said to me “You need to kiss a lot of frogs before you find that monster”. If frogs are 40lb Cod then I could kiss them all day to find my new PB, what a place, what a trip… bring on 2019’s Cod hunt.

This really was a brilliant trip where we had some amazing fishing and were left speechless by the spectacles of nature that we witnessed when the Humpback whales surrounded the boats. You too can experience the amazing Mefjord on one of our future HOSTED TRIPS.