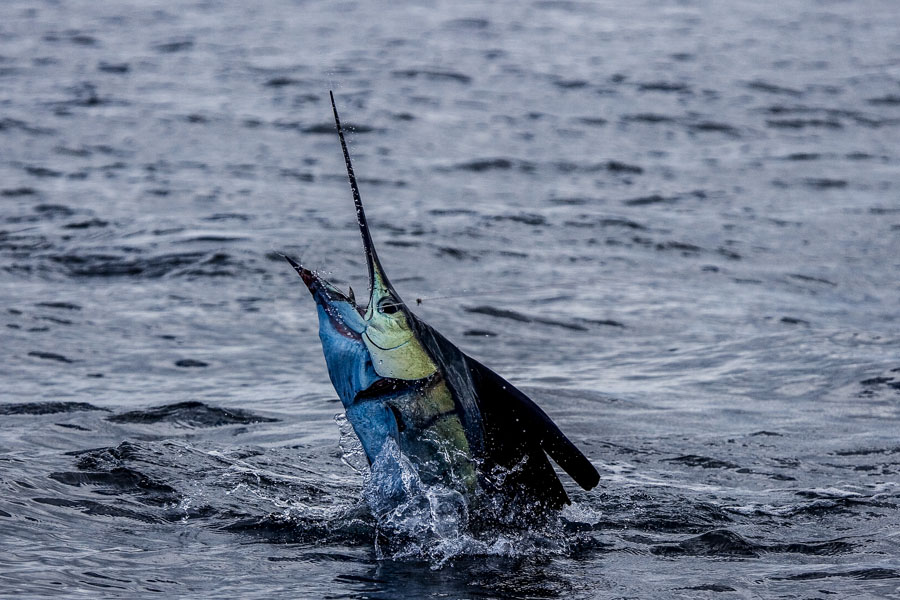 The A&B team has been working very hard today in glorious weather yet again. The sun shines all day and I guess it must be the same back home for you land lovers. Both teams were on the bigger strike boats today so it was all offshore work. The B team today was me and Crab Pott Chris with Humberto as mate and Manwell as captain. The A team was Tom from the Valleys and Cuda Tim on the other strike boat.

I must say that I am getting very concerned regarding Tim when I am not around to keep a close eye on him. All the staff have been told that if he is seen out alone they must bring him back to base camp.

We left the dock at 6.30am and sped offshore, about 7 miles out we spotted hundreds of Dolphins herding the bait fish with the Tunas in front of them. This is an amazing site and the Dolphins are often in family groups with many of them quite small only 3’ long. Within minutes we had two Bonitos destined to hopefully become Marlin Baits. Then a couple of Tunas quickly came on board.

The person in the photo is Chris I thought he looked a bit Australian.

We then decided to go further offshore in search of Sailfish and Marlin. Humberto rigged the rods perfectly, we had two Marin rods, two teaser outfits, a long-range Tuna outfit two flat lines, and two rods from the tower. That was the spread, then we also had two pitching rods baited for Sailfish and a Marlin Pitch rod baited with a Bonito. We were covered for any eventuality. We kept on going into the blue, we stopped going further after the depth finder showed 6500’ 17 miles off shore, now that is deep. Unfortunately, not a lot happened, we had one strike on a flat line and later one on the teaser rod that both Sailfish because we saw them. Try as we could nothing showed.

On the way back in we found the Dolphins and with them the Tunas, I actually foul hooked two Yellow fIn Tunas on my Rapala deep lures. Both times I thought I had hooked a substantial Tuna, but they were not that substantial. A  tough frustrating day with a couple of chances, but that’s fishing. 5 tunas would be good for many anglers so it was all bad.