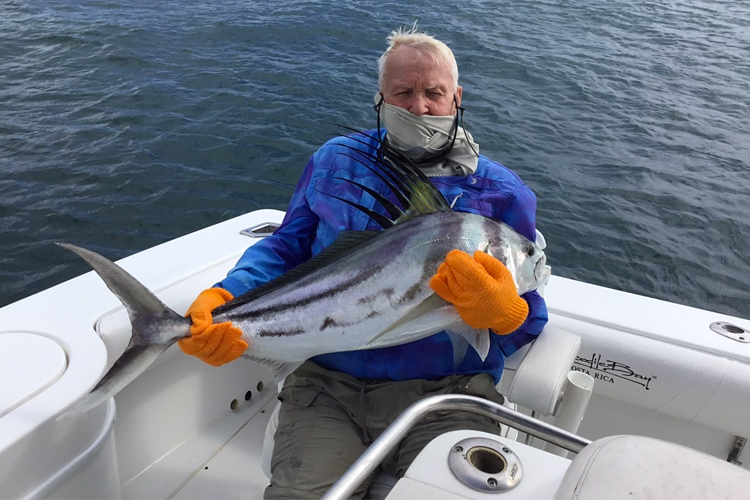 It looks like the fish are getting bigger and much more hungry the further we get into the start of the new year! I will now hand you over to the head guide for his report from the week –

December was a tune-up for the season.

It was great to see the movement around the resort again and to see some returning friends and meet some new ones.The captains have been itching to get on the water for months.

December started out much like the rest of 2020. It felt like a curse. First, the whole Pacific Ocean was cooler than normal. Then the entire Pacific coast of Costa Rica had a red tide. The tide only lasted a short time but when it finally left, the green water went out to 50 miles or so. Billfish like pretty blue water. The saving grace was that there were tuna everywhere. Tuna, and quality tuna at that. Most ran 40 to 70 lbs, but there were some big girls in the mix. Christopher and Brooke tussled with one that hit the dock at over 150 lbs. Joey, a University of Princeton football Player who has been coming with his mom since he was a head shorter than me instead of a head taller, landed 12 tuna up to 60 lbs on the day. That’s a whole lot of cranking.

There were a few marlin and sails in the mix, but tuna made for most of the sore muscles. Craig and Johnna got “his and her’s doubles” on the sails, landing the two bites they had on a tough day. Johnna also landed a monster jack crevalle inshore.

The water changed finally and the days after Christmas we had a flurry of sails popping up. The bigger numbers of sails don´t usually roll in until January so 2021 might be an incredible year.

Inshore the bite remained good with many double-digit days on roosterfish and the only time it really slowed was during the dark moon which baffled me as that is when I have had some of my best inshore fishing. Once again, I had to shrug my shoulders and remember in fishing, very few things are written in stone.

In December 2020, we hosted our Second Annual Botánika Owner’s Fishing Tournament, which was a great success. We had a total of 4 teams and 4 different 33″ Strike Tower boats. The winning team with anglers Bill and David managed to hang on to an early lead in the tournament. A couple of sails, tuna to 80 lbs, and a nice fat cubera snapper inshore gave them the edge over the other competitors.

On the Conservation Front

Upon the urging of FECOP, the sportfishing lobby in Costa Rica, a Congressional committee voted to move commercial tuna purse seine activity offshore to 100 miles. In 2014 Fecop lobbied and it was moved from 12 to 45 miles, and the tuna recovery has been phenomenal. It has to pass a full congress vote and then be signed by the president, but it will be a huge win for the ocean when it does.

Until then, Keep a wet line!

What a fantastic week that was!  If you have any questions about Costa Rica or would like to visit this saltwater fly fishing mecca for yourself, get in touch with us at 01603 407596.