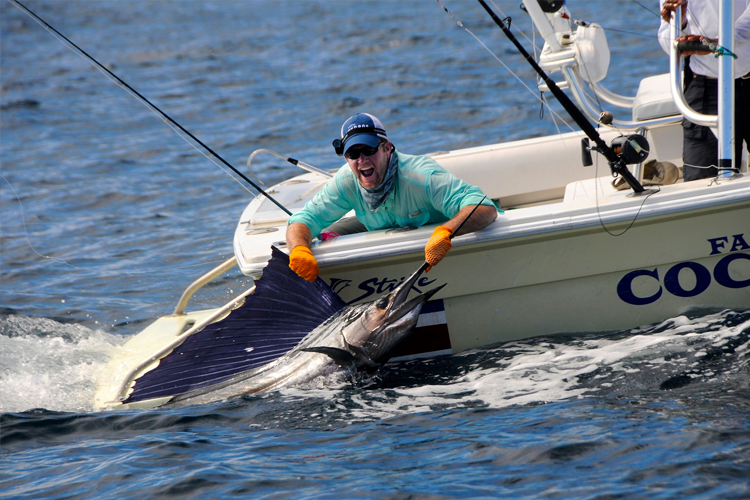 Another month has passed on the stunning waters of Crocodile Bay in Costa rica. Its great to see the guides moving closer to the shore due to the harsh conditions to make sure customers get the holiday of a lifetime! Ill now hand you over to the head guide for his words on the week. –

Strange weather really affected offshore fishing in March 2021. I have seen more rain in this “dry season”, dropping surface temperature and causing a big wad of Sailfish to move north early this year. There were a few really good days, but the sails just were not consistent. The Tuna on the other hand were in no short supply. Most fish ran 40 to 50 lbs but a few over 100 lbs tested some drag washers. Marlin, who are not bothered by the drop in water temperature, did take a few baits making for better than normal March marlin action.

The Pizzi family has been coming here for nearly two decades. We watched them move from dating to marriage to now coming with their kids. Ann Pizzi hooked into a 250 lb Blue Marlin, and as her husband Mike was clearing the other baits out of the water, a 300lb blue hit his ballyhoo. It was quite interesting as Ann’s fish went screaming towards Panama and Mike’s took off towards Nicaragua. Both fish finally settled in and were brought boat-side and released.

The saving grace has been the inshore action. Some boats have been having 20 to 25 roosterfish days with some jacks and Snapper mixed in. The Pizzi’s took their kids bottom fishing and took a mixed bag of Snapper, Amberjack, Sharks and a surprise Snook while Snapper fishing.

This is the time of year that the deepwater stuff moves into 250 to 400 foot of water. Deep jigging or dropping baits lately brought some tasty Grouper, small Tilefish and Congria to the dinner table. Pacific Red Snapper have been hitting jigs in 100 or more foot of water and Cubera Snapper even shallower. What’s nice about here is when one area slows, the other usually picks up.

Let’s see what April will bring.