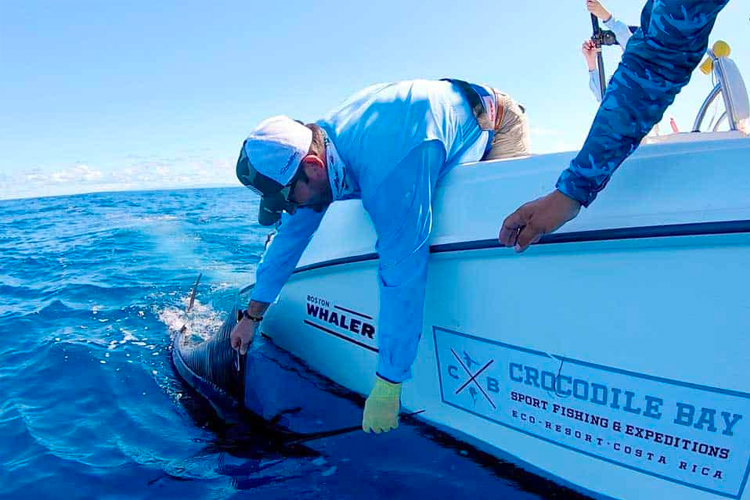 Another month has come to an end at Crocodile Bay, This month saw a fantastic range of fish, with the boats landing some consistent good-sized Roosterfish to 50lbs, Several large Cubera and also one boat managing a whopping 8 Marlin landed and released in just one day!

Last month I reported that the Marlin were starting to move into our area. If you ask my wife she might not agree, but I sometimes get it right. It is all a part of better marine management here in Costa Rica. For the last 6 years, the Tuna purse seiners have been moved off the coast by 45 miles. This protects one of the Marlin´s principle food sources, the Yellowfin Tuna.

Anytime you land more than one Marlin a day on the water, it is a good day. But if it happened several times, as it did in July of this year, well that’s a great day. Capt Francisco landed 3 in one day while another boat had 8 Marlin up in the teasers. A few Sails have appeared but not that many, yet.

Tuna have been consistently offshore swimming below the huge schools of dolphins that we have off the Osa Peninsula. Not particularly big, but these Tuna, 50 to 60 pounders, are common. Dorado have been found floating around logs, and they just may have a marlin patrolling the same area.

July has been a big month for roosterfish inshore, and though not common, several over 50 pounds were caught and released. Most are running 10 to 20 pounds but on matched gear, they make for a lot of fun.

The Bruiser jacks are running with them, while Snapper have been testing anglers as they race for the rocky terrain when hooked. Smaller ones are great table fare, but we have gotten into the habit of releasing the big breeder fish. Seems like 50 is the magic number this month as the biggest Cubera released in July went just over 50 pounds. Several over 30 were also taken. And a few African Pompano remain but the action on them has slowed.

The marlin action should continue into September. The humpback whales have also arrived in the Golfo Dulce with their calves and will stay until late October. They make for a special treat for our inshore fishermen, especially when mom is having breaching lessons with the baby whale.