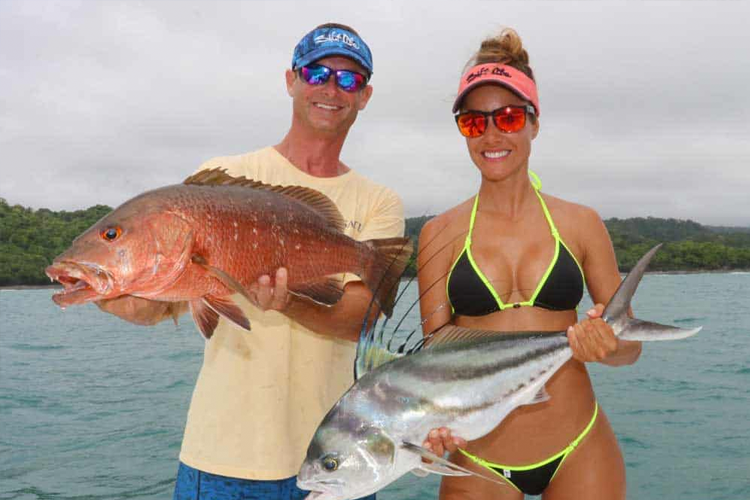 Another fantastic month has passed at Crocodile bay in Costa Rica. This month managed an amazing head of fish from all of the main species this lodge prides itself on including Roosterfish, Snappers, Grouper and Sailfish.

Inshore, everyone is catching fish. Close to the beach, there are lots of light tackle roosters in the 8 to 15-pound range, as well as Jack Crevalle. If you work areas like Matapalo, some bigger Roosters up to 50-pounds have taken baits. Plenty of Snapper and other bottom fish action. Some Grouper have been taken in deeper water as well as a return of Bluefin Trevally and African Pompano.

Offshore has been hit and miss the last few days after a good run of marlín. A few Sails show up now and then, and a dorado or two has been caught, hoping it is a sign of a good Dorado season coming up. Still, Yellowfin Tuna are abundant and most of late have been 50 to 70 pounds, a good muscle tester.

Still, lots of humpback whales in the Golfo Dulce and breaching school with their young is a sight to see. Lots of turtles are nesting and hatching in the area and you can see their tracks on the beach while fishing inshore or you can take a tour by land to the turtle hatching area.

The Amateur Fishing Club of Costa Rica hosted a one-day bottom fishing tournament at Crocodile Bay. A mixed bag of Snapper, Grouper, and Jacks were taken on a beautiful day weather-wise. Claudio took top honors followed by Gustavo who also had the biggest Snapper. Kellie took third and probably would have finished higher but the nice roosterfish she also caught didn’t count towards points for the tournament.

Crocodile Bay Resort really is a one-of-a-kind destination, catering to both anglers and holiday-makers. If the sound of this trip has got you interested, take a look at our Crocodile Bay Resort page for even more info including dates, prices and more detailed trip information.