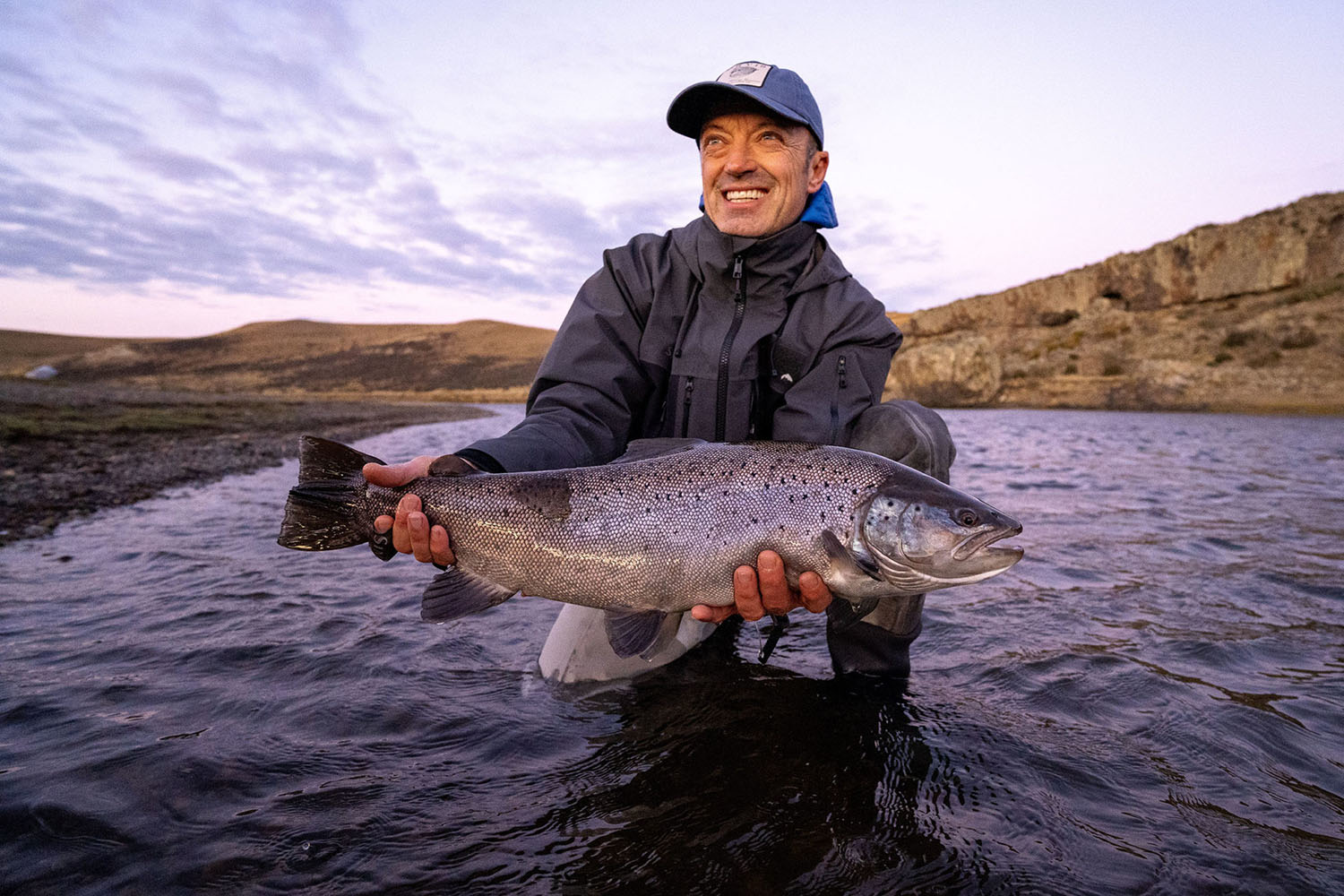 Week 8 saw some good old friends coming back to Las Buitreras Lodge during the regular FlyNature hosted week from Felix Hansvencl. Accompanied by some first-timers the whole group has been here now for the last 7 years and we don’t have to mention that all of them were more than happy being able to set their foot into the lodge again after such a long break due to the pandemic. This week’s nationality mix consisted of Germany, UK, Italy and Sweden. It is always a pleasure to see how friendships are created during those trips and this group is a good example as we feel, despite always having different characters and age groups around, at the end of the week everyone enjoys having shared some special moments on and off the water. In addition to that, the group experienced some exceptional fishing throughout the week with 108 sea trout landed, although we were experiencing changing wind directions and warm/sunny days.

We started the week with a good push of water and the river came up around 40 cm but remained clear all week. Hopes were high that with high tides and this rise we will see even more fish in the system as we already have had so far, the run has been exceptional. These hopes became reality as we did see a lot of smaller and medium-sized fishes which also stirred up fish that entered the Gallegos earlier. Therefore we hooked into some stunning fish during the week, with a mix of very fresh fish and some coloured seatrouts. Especially the most upper parts of our Las Buitreras beats produced some of the biggest ones, with C-Pool and Turning Bank working exceptionally well.

Toni found his holy grail in C-Pool already on day 3 when he hooked into a brute of a seatrout on the far-out channel. The fish went way into the backing several times running both up and down the pool. Playing a fish of this size in such a small run is an amazing experience and really puts your nerves to the test. Toni managed to keep his cool throughout the fight however and after some tense moments during the netting, he was staring down at a whopping 20 lbs cockfish. Memories for a lifetime, for sure! And to make it even better, a few days later he landed another 17,5 lbs there as well, he certainly did hit a jackpot this week. In another part of the river, first-time visitor Willi found his momentum fishing the lower zones and managed to land a fresh 10 lbs sea trout in Barranca Negra. And with that, that hole zone came alive with fish being hooked and landed every session.

Sven, here for the 6th time, landed a crazy kyped 14 lbs seatrout, Peter landed a beautiful 16 lbs fish in the dark over there and Eckhardt convinced a 13,5 lbs fish with our classic Copper John nymph in the run. Marco found a new favourite pool in Turning Bank and we almost had to drag him out of it after landing several fish in each of his two sessions there, not counting the fish he hooked and lost. His wife, Amanda, however, was on for a run this week giving Marco a hard time on the water. Casting and covering the water like a champ, she basically just kept on catching fish. The highlight of her trip was probably a double hookup in La Recta when we in the end had two fish in the net at the same time! Obviously, she caught the bigger one, an impressive 18 lbs seatrout. Well done Amanda!

Sven and Dirk already fished together the last few times and were a dialled in the team from Day 1. First Sven got a hold of a nice 12 pounder with his last cast in the dark at Cantera then Dirk landed three fish during one session two days later. Combined with some great laughs in the car in between pools, this week was a great reunion and definitely not the last one for them.

Alex B had his moment on Day 3 while fishing upper 1 with Eckhardt. Felix and Rick just arrived and were joking that they wanted to see something when a couple of casts later they experienced a spectacular fight. Alex made a nice cast in Coco´s when his small nymph got inhaled right away causing a huge swirl and a fish swimming upstream against the drag. That was a big fish for sure. One thing you learn quickly here at Las Buitreras, is these big fish got that big for a reason, they know every dirty trick in the book. It swam over onto the shallow bank trying to scrub the hook and leader on the shallow gravel bank. This is a scene we have seen before with big fish and we knew we had to move the fish away from the shallows as soon as possible. Alex managed to put just enough pressure to not break the leader or pull the fly out while still moving the fish back into deeper water. Luckily the hook did stick and after seeing the fish standing in the current like a shark with its paddle and backfin looking out of the water we could finally net it. Relief for Alex and all of us around, what a moment. His fishing partner Ecki who had been fishing another pool several hundred meters down came up to congratulate and celebrate the beautiful fish. Eckhardt landed another beautiful 14 lbs sea-run a day earlier in the Kitchen pool.

First-timer Tim C from the UK was fishing with his good friend, Axel. 3 years after deciding to visit Las Buitreras Tim was finally able to set his feet on the banks of the Rio Gallegos. His first week was definitely a good one, writing down two 16 lbs, a 19,5 lbs and a 12 lbs fish into the book by the end of the week, just to mention a few. We are very happy that this week turned out this well for you together with Axel who as well landed a beautiful chrome 12 lbs sea run in LA Recta mid-week. Our first-timers Peter and Michael started their visit with 3 days in Zone Zero to get into the rhythm. They both started catching fish from day one and never looked back, catching fish on a daily basis throughout their trip! First Peter set a mark with landing three fish in Zone 1 the first evening, with a cracking 18 pounder in Kitchen which he could trick with his Vitamin Nymph. After that Michael also started his run with two fish over 15 lbs on Day 2, having in mind that he just started his spey casting and was on his first real fishing trip.

Pontus, Alex S and Nick W were enjoying some great brown trout fishing in Zone Zero with some windless and warm days offering good conditions to stalk them also with dry flies, such as mouse patterns or grasshoppers. Pontus was keen on the seatrout and was finding his spot at Weeds pool over the week where he landed several nice fish.

A great week comes to an end, thank you all for making this one possible!

Our fly fishing specialist Peter Collingsworth has been over to Las Buitreras, fishing the banks of the famous Rio Gallegos many times, so if there’s anything you would like to know about the fishing or if you have any questions you’d like to ask him, you can contact him on 01603 407 596 or email at peter@sportquestholidays.com he would be delighted to speak to you.