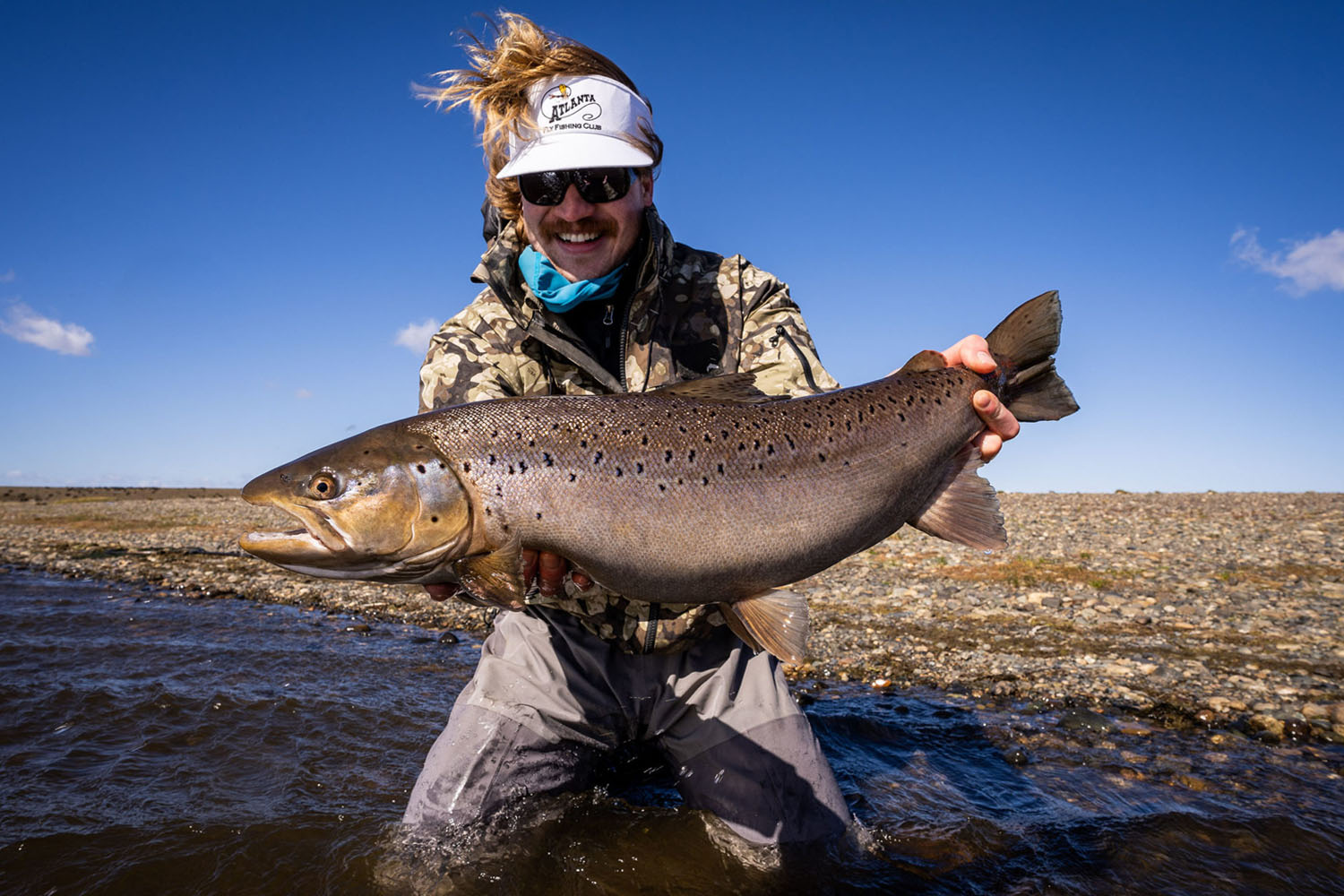 As we’re approaching the last month of the season here at Las Buitreras, days are getting shorter and the colors of the trees and surroundings are changing into beautiful autumn decorations. In terms of the fishing, this part of the season means shorter siestas to make the most of the afternoon and evenings. Big runs of fresh fish are still hitting the river, making March a perfect month for anglers hoping to mix their catch up between fresh chromers and colored, mean-looking fish that’s been in the system for a while.

This week’s group was hosted by Glenda and Noel from Ireland who brought a mixed group of anglers from the US, Ireland, UK, Sweden and Germany, Most of them visiting us at Las Buitreras for the first time. The feeling of not knowing what to expect is a good one and we love introducing new clients to our unique fishery down here in southern Patagonia.

Due to strong winds we started the week with rather colored water, which as everyone knows by now means a chance to fish our beloved Yellow Yummies, Green Lanterns, and other larger flies. A great first day intro to the wild side of southern Patagonia for our new guests. Luckily, these winds usually just stay for a day and then disappear. As we’ve mentioned several times in our former reports, these conditions can produce some very good fishing as long as you manage to cover water, and this time was no different. Our Swedish duo Leif and Lennart were in peak form after a week at Las Buitreras and were now trying Zone Zero for an extra three days before flying back to Sweden mid week. Lennart needed no introduction to these new waters and went straight to work. Not deterred one bit by the strong winds he went for a Yellow Yummie when fishing Office Pool and was instantly rewarded with a solid 18 lbs fish!

Austin from Atlanta, here for the first time with the ambition to learn spey casting and hopefully catching one of the monstrous Sea-run Browns found down here, wasted no time. Even though Austin arrived with more or less zero experience with a double hand rod he was a natural and picked it up lightning fast. Starting his week in Zone 4 with winds humbling even the most experienced southern Patagonian anglers, the pool options were quite limited. Eventually the choice fell on Puesto, and more specifically the lower part of the pool where the wind was somewhat favorable allowing him to cover the pool properly.

Armed with a chartreuse streamer he waded out in the waves and started working relentlessly. And 30 minutes later the reward came when he landed a 12 pounder in seemingly impossible conditions. This spurred Austin on and he kept landing fish throughout the week. We would consistently hear him shout “yeah baby” which always made the guide look for the net before realizing Austin was just enjoying the feeling of a good cast and the running line hitting the reel. One of the highlights, apart from improving immensely with his casting, was when he landed a beautiful fresh 15 pounder in Little Corner on a perfect cast, making it even better.

Austin’s fishing partner for the second half of the week, Jake came over to experience Las Buitreras first hand. Being a passionate Steelhead angler, he knew how to deal with sea-run fish but an Argentinian Seatrout was still missing on his list. Not for long though as he ticked that box on his first session when landing a near perfect 15 pounder in pool 75 on an EMB fly. His most memorable fish from the week however was a solid chromer caught in Little Corner that took Jake deep into his backing several times before finally being landed.

Hermann and Horst, two long time friends from Germany, were also here for the first time. They were celebrating 50 years of friendship and had decided that Las Buitreras was an appropriate destination for such a jubilant occasion. We can’t begin to explain how honored we are to have guests celebrating big occasions with us down here in Argentina. For the rest of the group it was very obvious that these guys were childhood friends and they were constantly pulling jokes on one another. To make things even better they both had some good fishing during the week where the highlight was Horst’s beautiful fish on Day 4. Once again, Little Corner was the pool that delivered and a small Copper John nymph did the trick. We are very happy we could serve you two for this special anniversary!

Our hosts for the week Noel and Glenda spent most of their time socializing with and supporting their guests along the river. Fortunately they also had the opportunity to fish a bit on their own, something Noel, here for the first time as well, capitalized on when he landed a nice fish midweek in Wagon wheel. Noel, being his humble self, instantly called it “the luck of the Irish”, something the rest of us strongly disagreed with.

Glenda, who’s been here before and knows how precious each cast in this river is, was determined to make each and every one of her’s count. After listening to our stories about how efficient Sunray Shadows had been throughout the season, with an almost ludacris amount of action materializing every time we tried it, tied one on at her first chance to fish, and as it turned out it never came off. It probably helped her in her conviction of the fly when she landed a nice fish in Island Stream on her first go. Glenda kept having an insane amount of action every time she had a chance to fish and needless to say, the fly stayed on. As Glenda and Noel will both fish with us next week we are very curious to see how this pans out and whether there will be a change of fly at all. More to come on this.

Another highlight this week was the St Patrick’s day celebrations led by Glenda and Noel. Glenda came prepared with her flute and printed songbooks so that we could all join in on the singing. After a few practice rounds accompanied by several shots of various premium Irish Whiskey and to the amusement of the lodge staff, it was an excited and loud group performing the famous Irish song “ Fiddler’s Green” to the tunes of Glenda’s flute.

Our last couple of fishing partners for the week, Andy and Julian, had a very different background when it comes to fishing but were a great match from Day 1. Andy, who has been traveling around the globe most of his life both as a journalist and avid fly fisherman, had decided to give Las Buitreras a go after fishing several other places in Argentina for Sea-run Browns. It was obvious from the get go that he was dialed in and landed fish in more or less every session during the week. Julian, arriving here as an absolute beginner in terms of spey casting, was determined that a lack of experience was not going to deter him from visiting Las Buitreras. Instead he listened attentively to directions from both Glenda and the guides during the week and it didn’t take long before he started hooking into and eventually landing fish.

His first fish in the books came on day two when he landed a nice 10 lbs Seatrout in Limits pool. Not content just yet, Julian continued by landing an even bigger fish, a beautiful 12 pounder, the following day in Little Corner. A fish to remember for Julian who kept improving all week long and was rewarded throughout his entire stay with plenty of action.

Göran and Håkan from Sweden had started their trip to Patagonia with a three day trip to our add-on program Glencross. They now arrived mid-week for another three days at our other add-on option Zone Zero before taking on the main beats of Las Buitreras. Already tuned in to the conditions of Patagonia and Rio Gallegos, they landed plenty of resident Browns along with a couple of sea-runs during their half week in Zone Zero. We’re excited to see them take on Zone 1 to 5 next week.