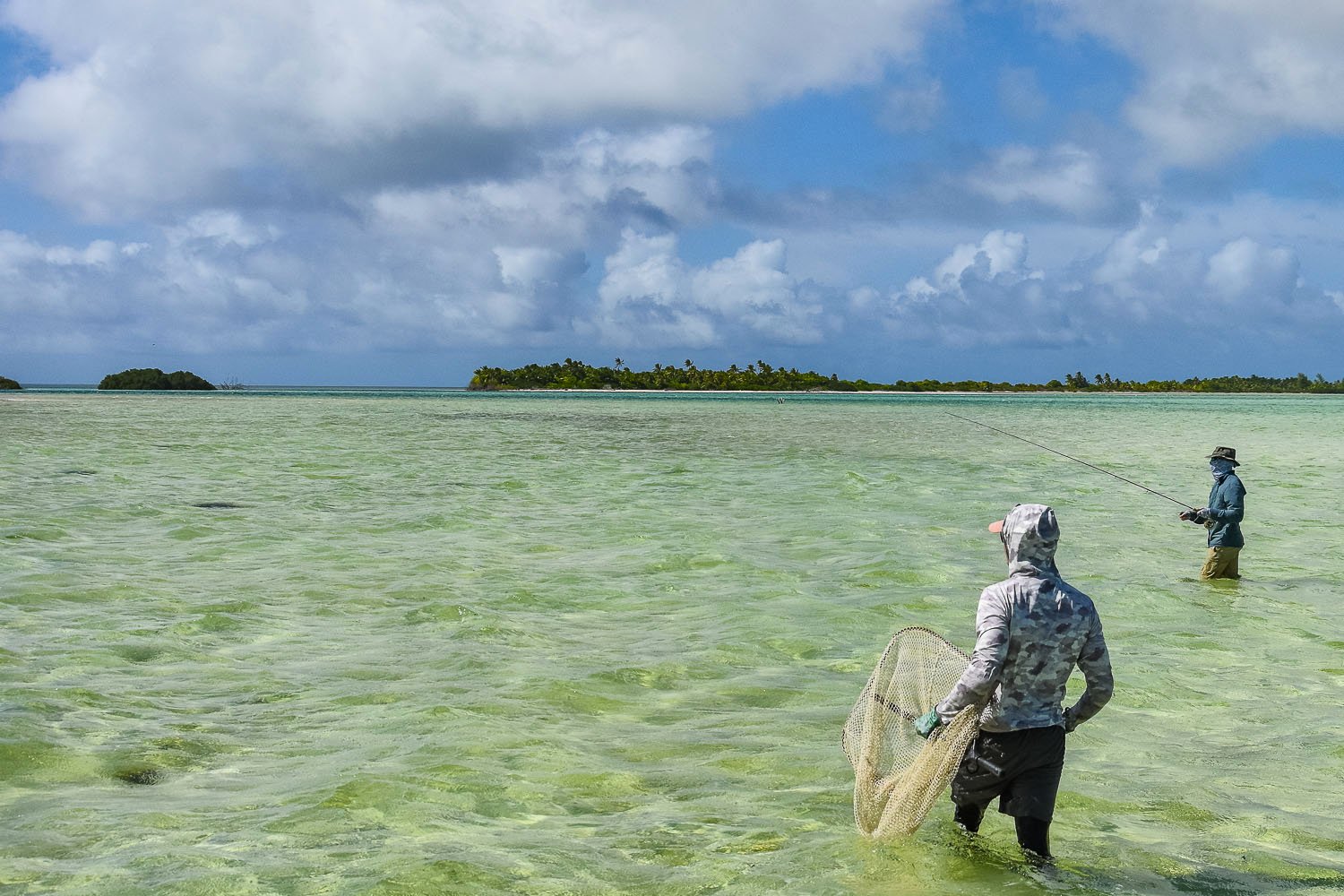 Welcome to the 6th week’s fishing report from the Providence Atoll’s March – April 2022 fly fishing season. This week saw us welcome a group of mostly newcomers to the Prov fly fishing experience. Following the usual thorough orientation of our mothership and description of the day-to-day fishing routine we set sail for Providence and its exciting flats.

The first day offered up plenty of opportunities on the GT front with a total of 13 brought to hand by days end. Tom C, James E, Gerald, John A, and Jeremy all managed to land their first-ever GTs on the fly, well done gentlemen! The tailing fish species were also encountered at times, which allowed James O and Chad to add a splash of color to the catch report when they managed to hook and land a Triggerfish each on the opening day of the week. The standout catch, however, went to Gerald who after spotting a large olive shape move across a white sand flat, made a good presentation and a couple of strips, before he was connected to his first-ever Bonefish on the fly. Following a long battle consisting of long runs into his backing, he was rewarded with a Bone of 10lbs… Well done Gerald, a special way to end the opening day of fishing!

The second day saw our guests enjoy another great day of GT fishing with a total of 19 landed during the day. Catches of note included John L’s first-ever GT and Bumphead Parrotfish on the fly, well done John! James E also managed to land his first-ever Bumpie, while Jeremy went on to hook and land his first-ever Bonefish. Well done guys, a great day with loads of first-time experiences enjoyed by our guests.

The third day provided yet more productive flats fishing for GTs with a total of 15 landed. The day’s highlights included two special catches, the first for Chad who had been waiting in ambush on a coral head when he spotted a blue shape sneaking past his position. After presenting his fly and following a couple of fast strips he hooked and landed a monster GT that measured 113cm, well done Chad! His boat partner, however, enjoyed a moment of flats fishing magic while wading an exposed ridge on the low tide when he saw a massive black fish holding in the current. Tom presented his fly in the perfect spot and watched as a giant mouth exploded out of the water and over his fly. After an intense fight the landed fish measured an amazing 121cm. Well done Tom P, undoubtedly a fish of a lifetime! Chad continued his good form and eventually landed a Triggerfish late in the day. Well-done gentleman, a special day on the flats shared between good mates is about as good as it can get.

The fourth day saw a total of 5 GTs landed with the fish of the day caught by John A. His trophy was encountered while wading on the edge of the flat when he saw a fish charge towards him from the deep water. After a quick snap cast, he watched as the fish inhaled the fly at his feet. An intense fight followed, and the landed fish measured an impressive 110cm…. well done John A! Chad managed to land yet another Triggerfish, to cap off a other great day.

The fifth day’s GT catch tallied up to 7 for the day. The fish of the day went again to Chad who after waiting patiently on an exposed set of coral heads saw a school of large black fish move into the area. He presented his fly in front of the school before all hell broke loose as several fish rushed forward to eat his helpless baitfish imitation. After an intense fight and a bit of luck, he managed to land another trophy specimen of 118cm, well done Chad!

The sixth and final day of the fishing week saw a total of 14 GTs landed for the day. The largest GT on the final day went to James O who hooked and landed an incredibly strong 97cm fish surrounded by beautiful azure water and white crashing surf. The Milkfish also made an appearance on the final day which provided an opportunity for John L and John A to fish and eventually land their first-ever Milks on the fly. Well done, Gentlemen!

This brings a close to a week full of first-time experiences for our guests. We enjoyed every moment we spent on the flats this week and we look forward to welcoming you all back again soon.