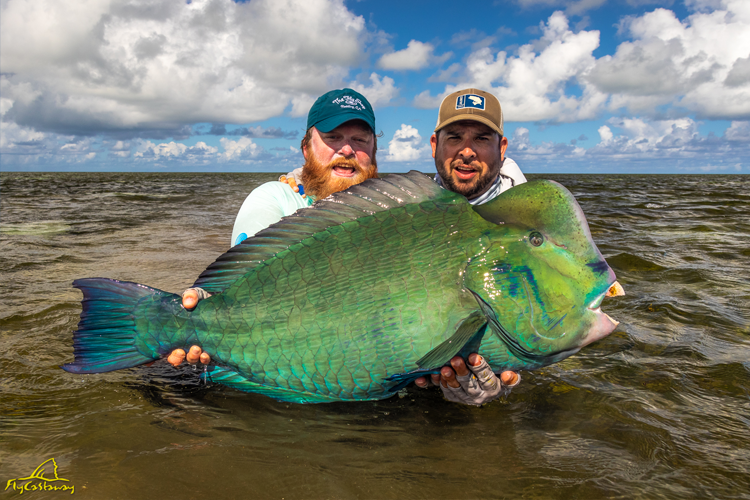 Providence is back! After what felt like a lifetime due to COVID, the one and only Providence atoll is back up and running and has started its first week on the flats. We knew that the fishing would be good due to the rest but not like this! You can find the full report below –

After 13 months of COVID-induced limbo, the MV Maya’s Dugong finally dropped her anchor on the shallow exterior of Providence Atoll. Ahead of us lay 419km² of pristine flats, wild lagoons, and all the iconic fly fishing targets that frequent its waters. Aboard our mothership for the opening week of the April 2021 Providence fly fishing season was a group of 10 anglers from the United States, all but 2 were newcomers to Seychelles and its abundant waters. The excited chatter around the dinner table on the eve of day 1 fitted the occasion – the fly fishing playground that we had all been dreaming of for just over a year was now a reality. It was well and truly go-time!

Day 1 – Providence welcomed us to its abundant waters with clear skies and an early morning neap tide low. Conditions were just right for us to access the flats immediately and fish for a wide range of targets including, GTs, Bonefish, Triggers, and bumpies. Our expectations were met emphatically with 21 GTs, 7 Bonefish, and 2 Triggerfish landed for the day. Highlights from day 1 included guest Brian’s first ever GT on the fly and the first meter GT of the season, which stretched the measuring tape to 102cm. Peter’s feisty Moustache Triggerfish and David’s beautiful Yellow Margin Triggerfish added a splash of color and a change of pace to the day’s antics.

Day 2 – Bright sunshine and a gentle south-easterly breeze made for yet another day of saltwater fly fishing bliss on the flats with 16 GTs, 3 Triggerfish, and a handful of Bonefish landed. Brian broke the meter mark for the second time in 2 days by landing an incredibly strong 107cm GT. Malik landed his first Moustache Triggerfish of the week while Mark and Justin both landed their first Yellow Margin Triggerfish on the fly. Steven, Dave, and Charles all managed to land both Bonefish and GTs during day 2.

Day 3 – The third morning saw a move of our mothership to an area that provided us more convenient access to the flats better suited for the looming spring tides. A total of 17 GTs, 1 Milkfish, and a few Bonefish were brought to hand for the day. Steven and David made quick work of the Bonefish as they waded the beautiful white sand flats of Cerf Island. The pair also managed to hook into a Milkfish each in the last hour of the day. Unfortunately, any thoughts of a double were quickly squashed as David’s fish came unbuttoned early into the fight. Steven however, managed to stay connected and after a titanic battle and with just a few minutes of sunlight remaining, brought his first-ever Milkfish on the fly to hand. A beautiful catch and the best way to end a busy day on Providence Atoll.

Day 4 – The spring tides were now in full swing resulting in a change of pace on the flats for our guests. Our group managed to land 13 GTs for the day with Malik’s GT measuring 93cm, the largest on day 4. This fish was picked from a large school of GTs as they pushed onto a shallow finger flat in hot pursuit of a shoal of baitfish. Stephen ended his day by taking on the atoll’s resident Milkfish and following a few close calls he finally managed to get a good hook set on an absolute monster that fought into the early evening. After what felt like a lifetime and in just about total darkness, Stephen’s fish was finally brought to hand completing his first-ever Milkfish catch. Well done, Stephen!

Day 5 – The fifth day dawned with a couple of ominous squalls coming from the southeast on a light breeze. A total of 13 GTs were landed for the day with Charles becoming the second guest for the week to break the meter mark, landing a beautiful 101cm GT after a titanic tussle in a shallow coral garden. Justin experienced a stellar day on the flats landing 4 GTs before tasting success on the Milkfish front, landing his first Milk, and bringing the week’s tally to 3 for the week.

Day 6 – Our guests were treated to some of the finest saltwater fly fishing action available in Seychelles on the final day of the fishing week. Our group landed 33 GTs, of which angler Mark landed 13 himself. Well done, Mark! Although the Bumphead Parrotfish action had been scarce by Providence’s standards, father and son, Brian and Stephen managed to land one each, at the same time, in different areas of the atoll. Angler Peter also enjoyed a stellar day on the flats, landing 8 GTs and a powerful Bumphead Parrotfish which brought our first week of fly fishing action of Providence Atoll to an epic end.

Week 1 on the flats of Providence Atoll was a resounding success. We enjoyed a slice of solitude from a complicated and uncertain world together. We shared smiles, laughter and made memories that’ll last a lifetime. A special thanks to all of those who made the long journey to join us. We had a blast!

Our total catch tally for week 1 was as follows: