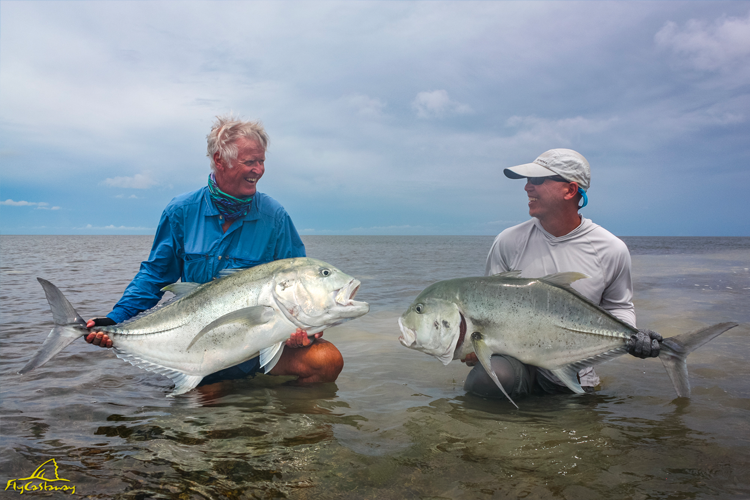 As the final week at providence comes to an end its sad to see it go until October this year, however, looking at the captures from this season, we could be in for a ride this October!

Sadly we were already at the beginning of the third and final week of the Providence April 2021 season. With two weeks of hardcore fly fishing action behind us, we were however excited to make the most of the remaining time we had on the atoll’s wild and abundant waters. Following our routine of tackle inspection, boat orientation, and guide’s meeting we settled in for the evening. Our minds whizzing, full of exciting thoughts of scores to settle and fish to be caught.

The first day dawned with dark skies and a stiff easterly wind. An early morning neap pushing tide allowed us to head straight for the flats with expectations of loads of tailing species and GTs following stingrays. The tough light conditions made the fishing tricky, however, we were still able to find the fish and land a total of 12 GTs, 2 Bumpies, and a few jumbo-sized Bonefish for the day. Michael and Tom got into the thick of the action when they encountered a massive school of GTs that were following several Nurse sharks along a shallow finger flat.

Following a hurried approach to get into position both angler’s flies were delivered into the mass of boiling water and were exploded upon by two big GTs. Despite the amount of coral in the area both anglers managed to land their fish, Michael’s a monster of 113cm and Tom’s just as impressive measuring 107cm. The chaos continued for the pair when the school of GTs appeared again, this time following Lemon sharks. As before, both flies were delivered to the school and both Tom and Michael hooked up again and eventually completed the pair’s second double within 20mins. An incredible moment of GT fly fishing, well-done guys! The Bumpies were out in full force with large schools upwards of 25 fish encountered on the flats. After a few close calls, Brian’s fly fishing dream turned into reality when he hooked up with his first Bumphead Parrotfish.

His dream catch charged across the flat tearing backing from the reel. Following a nervy tug of war, his Bumpie finally came to hand which led to an emotional celebration and a quick few moments in front of the camera. Well done, Brian! Tom, who enjoyed the wild GT action also managed to land his first Bumpie of the week, and a little later a few Bonefish securing his flats slam. Well done Tom! Tony also enjoyed some of the Bonefish action and went on to land a trophy of 10lbs, well done Tony. This concluded a wild day 1 one on Providence’s flats.

The second day saw the skies darker and even more ominous than day 1. Rolling sets of wind and rain hit the atoll constantly from the southeast. Despite the visibility being exceedingly difficult we were fortunate enough to encounter the fish whilst they tailed across the flats, giving us an indication of their whereabouts. A total of 6 GTs, 2 Bumpies, 2 Triggerfish, and several Bonefish were landed during the day. Top honors on the GT front went to Sean who encountered a school of large GTs that had rushed onto a shallow flat. The school then began tailing aggressively which allowed him to catch up and make his presentation. The first fish that spotted his fly raced across and crushed it.

It then proceeded to blast off the flats taking loads of backing in the process. Sean eventually brought in his beauty which stretched the measuring tape to 105cm. He later went on to land a Triggerfish and several Bonefish completing another flats slam for the week. Well done Sean! Tony also got into the action and opened his triggerfish account with a beautiful Moustache Triggerfish, while Brian and Chris both made the most of their opportunities in front of Prov’s resident Bumpies landing one each, well-done guys!

Day three and finally we had clear skies, although a stiff southeast wind continued. Although the visuality had improved greatly it turned out to be a relatively tough day of fishing on the flats with 3 GTs, 12 Bonefish, 1 Triggerfish, and 2 Bumphead Parrotfish landed for the day. Tony however, experienced one of those days that only Providence’s diverse flats can deliver landing 4 of Prov’s 7 iconic fly fishing species. His day included a beautiful Moustache Triggerfish, a GT, and Bumpie before ending his special day and super slam with a turbo-charged Bonefish. Well done, Tony!

The fourth day dawned with clear skies and a move of our mothership for easier access to the flats better suited for the approaching spring tides. Our move delivered results on the GT front with a total of 12 landed for the day. Bryan and Chris enjoyed a stellar day landing several GTs between the pair. The largest fish of day 4 also fell to Brian who after spotting a GT moving along a lagoon edge presented a short cast ahead of the fish. Once his fly was spotted the fish wasted little time and after two hard tail beats, engulfed the fly. Following an intense battle, Brian eventually brought his beautiful 98cm fish to hand. Well done, Brian!

The fifth day saw a continuation of the clear skies and a stiff south-easterly wind. A total of 7 GTs were landed for the day with Brian encountering a lagoon-bound monster that attempted to eat his fly three times during the same presentation. The fish took hold of the fly just yards from the lagoon edge and what followed was 20 seconds of incredible power that eventually led to a broken fly line. Heartbreak! Claire and Sean enjoyed a great day taking on the various Grouper and Snapper species that call Prov’s coral gardens home. The pair landed several doubles of large Bohar Snappers, Bluefin Trevally, and grouper species which added numbers to their personal saltwater species tally.

The last day of the week and season dawned with a clear horizon and a full moon spring tide dictating the fishing schedule. The large volume of water moving over the flats resulted in short periods of activity during different stages of the tide. Our group landed 10 GTs in total with loads of shots at trophies throughout the day. Sean was in the thick of the action yet again. This time, while waiting in ambush on the outer rim of the atoll he had 3 trophy GTs approach his position. His presentation caught the attention of the largest fish in the school which unfortunately charged and missed his fly. The remaining two fish then shot towards the fleeing fly and crunched it at his feet. An intense battle ensued and after dodging the odd coral head Sean landed his second trophy Giant Trevally of the week, measuring 108cm. Well done Sean! Tony had a remarkably similar experience, however in a different area of the atoll. While in their ambush position on a bridge finger flat between two lagoons Tony had 3 giants push up onto the flat. He nailed the presentation, and the lead fish wasted no time inhaling the fly. After a long battle, the landed fish stretched the measuring tape to 109cm. Well done Tony!

This brings us to the close of a very exciting and productive 3 weeks of fly fishing Providence Atoll. A special thank you to all of those who made the journey out to join us this April. The fishing action lived up to our expectations and we can’t wait for what our October – December 2021 fly fishing season has in store for us.

Our catch tally between 7 anglers during week 3 was:

Till next time, tight lines from the Providence Guide Team