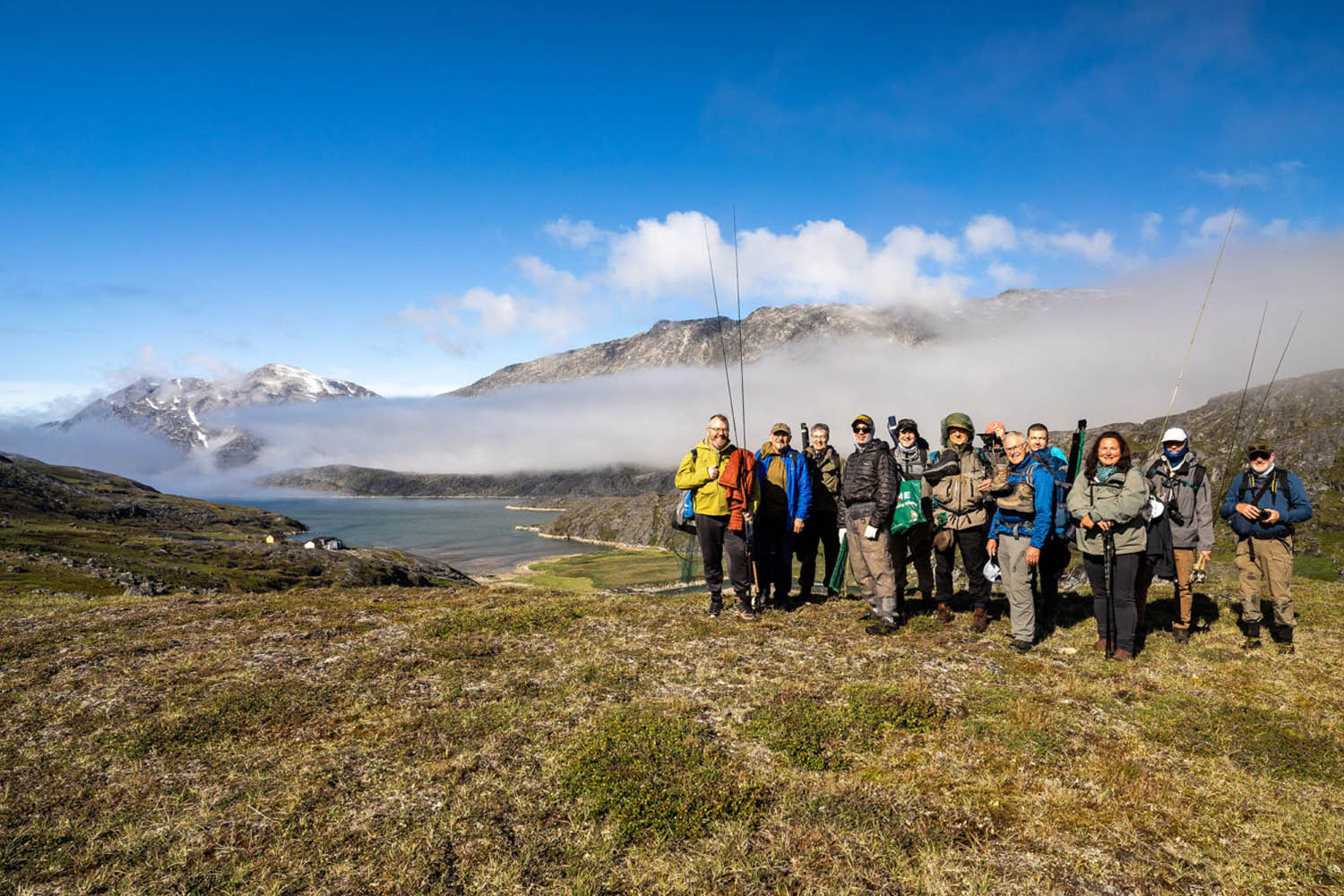 After missing two full seasons in Greenland, it felt like a blessing to finally be back in the spectacular Kangia valley. Sitting on the veranda, overlooking the mighty Kangia inlet and the home pool section of the river brings a set of emotions hard to explain to anyone who hasn’t been here. It’s a feeling best described as humbling and overwhelming at the same time.

Prior to the official opening of the season, we had somehow, miraculously, managed to build two new cabins next to the lodge and are planning to add at least one more before the beginning of the 2023 season. Adding these cabins means we can offer our guests more privacy and space. We are also planning to extend the dining room and bar area as well as the outdoor veranda. All we need is for the weather to cooperate and allow us to get out there in time. The biggest challenge with running an operation as remote and exposed to weather as Kangia is the logistical side. To be able to not only find all the supplies you need for a season but then to have them transported hours by boat before being carried up the tall cliffside to the lodge is an impressive feat by all involved, and we are forever grateful for having such amazing staff at the lodge helping out with this. This season alone we are talking more than 13 tonnes of supplies and materials that were carried up those stairs. If you have visited us in Kangia, you will understand what that actually means.

Another big improvement we made for the 2022 season was to improve the menu. With direct access to such luxury items as Char, Cod, Halibut, and rain deer, all swimming or running around just outside our doors, it would be a shame not to make the most out of it. Therefore we were lucky to find a professional chef in Bjarne, who’s not only an amazing chef but were able to spend the whole season off the grid at the camp. This was a real game changer for us and helped us improve the quality of the whole experience of being at Kangia.

The beginning of this season was special as winter did its best to keep its grip over the Arctic regions of Greenland for as long as possible. When we last ran a full season in 2019, before the covid shutdowns, summer came early, and the river was packed with fish when our first groups arrived in mid-July. This year however, it was a much different Kangia river and valley welcoming us in July. For the first couple of weeks, we still had spots of snow cover that we had to hike across on a daily basis. The extended winter season in the Arctic also meant some minor logistical problems as we simply couldn’t get out to the lodge as early as planned to prepare for the season and set up the new cabins the way we had initially planned.

This is all part of working in remote locations like Kangia and certainly adds an interesting challenge to running an operation. Apart from the logistical challenges, the run of fish was also later than usual. We normally see the first schools of fish heading up the river in late June. This year, because of the extreme winter, fish stayed out in the fjord much later before starting to move up. This is something that is impossible to plan for and part of fishing but this year was unusually late according to our experience and all records. Nonetheless, our first groups were still able to catch some nice fish in the river but not in the numbers we are used to. Luckily we had a great group of clients who were all understanding and positive. A bonus when coming in the early season, apart from the regular whale sightings, is that the sea fishing is exceptionally good, and you can catch both Char and Cod on spinning and fly gear just outside of the lodge.

As the season progressed the number of fish kept increasing with school after school pushing up the river. An interesting note for this season was that we had higher water levels and more rain than we’ve ever seen throughout the whole season. This meant that the river looked more like a small steelhead river than the shallower Kangia river we are used to. With more water came new opportunities and we started fishing switch and light spey rods in weights 5, 6, and 7. Loaded with sink tips these types of setups were very effective and allowed our guests to cover most of the hot spots. As always, a skated fly on the surface more often than not led to violent attacks from below so a daily mix of techniques and flies was still the way to go for anglers wanting a fun challenge.

Previous seasons with lower water allowed us to spot and specifically try to target some of the bigger fish that were hiding. This season’s higher water level made it trickier to target specific fish but allowed for more experimenting on how to find the big ones.

Late August and September had the best fishing overall, as well as the most pleasant weather with more sunny days and a great mix of both chrome and coloured fish. With each season, August and September are more and more looking like the best bet for landing one of those big, colored fish that most of us dream about. Early season however, is still the time for those bright, silvery Char.

The biggest landed fish of the season came in late August when Didier managed to land a near-perfect 5 kg fish in a spot between the well-known pools Aquarium and Hetlam. The fish took a saltwater shrimp fly that Didier fished very slowly with some patented twitching moves. Whether it was Didier’s secret big fish twitching technique, or simply the right fly in the right place at the right time, that finally made the fish charge, we will never know.

Without trying to sound too repetitive, we really feel like we can’t highlight the fact that visiting Kangia really is a way of disconnecting from the outside world. Having no wifi or cell phone signal to interrupt you, a rare luxury these days is something our guests seem to really appreciate. Instead, you will experience life as it is, right there and then. Surrounded by mountains overlooking the ocean where you’ll see whales breaching the surface any given minute, eagles soaring in the sky, encounters with wild reindeer and polar foxes, the occasional arctic storm, northern lights, and if you’re lucky, a Greenlandic coffee to top the day off. All this while spending most of your day fishing one of the best sea-run Arctic Char rivers known to man.

To further improve the program and experience in 2023, we will have a new boat for next season and will be able to offer sea fishing a couple of times per week. For those who don’t know, the sea just outside the lodge is absolutely packed with Cod and Char. Especially during the early season weeks of July, the Char fishing in the fjord just outside the river mouth is super thrilling and can be done with both spinning and fly gear.

If we venture a little further out into the sea, there are some great spots for wolffish and halibut. By late August and September, there are big numbers of Atlantic salmon coming into the fjords to feed as well. They can be targeted with spinning gear and put on a heck of a fight for anyone lucky to hook one. This year we didn’t have appropriate equipment for salmon and our gear got obliterated every time we hooked one. Next year we plan to have an offering of high-quality gear for all types of sea fishing which can be a fun option for those wanting a mid-week break from river fishing and seeing something else while in Greenland. Preparations are already taking place and we can’t wait for next season to arrive.

Thank you so much to everyone who visited us in 2022 or took the time to read this report. We hope to see you all on the water.

If you would like to learn more about our trips to Kangia River Lodge, call us on 01603 407596 or email us info@sportquestholidays.com. Remember to also join our weekly newsletter as this will be the first place that will be notified regarding any new tours in the future.