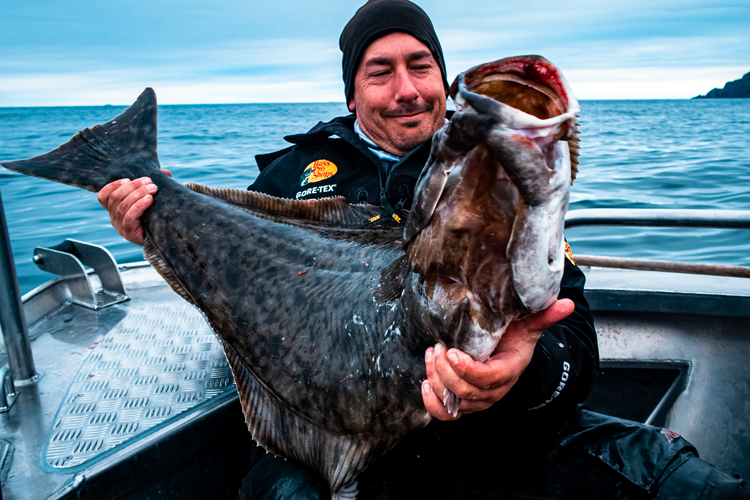 We have come to the end of the season over at Havoysund – This season has been absolutely amazing, with so many anglers managing to land themselves some fantastic Halibut during their weeks on the water. This week saw the first push of some true Norweigen winter weather in the form of lots of heavy snow, although this didn’t stop the anglers from landing many 100cm+ Halibut!

We have just picked up the last boats for this year up here in Havöysund. We have also ended this year’s with some fantastic fishing as well. Last week we had a visit from the Takida gang, and we have fished into the winter. The weather has changed over the previous week, and the snow is now up here in the north. The winds have been a bit windy towards us during the week and were from the north, so we got a lot of water pushed into the area, which complicated fishing for us a bit.

Unfortunately, we got off to a sluggish start to the week when during the first day, we could not find the fish, but we saw it as a warm-up day and prepared to find them. The second day it became possible to get away from shore for a while, so we went to an area hoping for some action as some of the gang were also waiting for the first Halibut of their lives. Once on the spot, it started with a small Halibut for me in the first cast at the same time as a Halibut sucked in Robban’s baitfish, which he hooked; while we pumped these up, it was also a small fish for Stefan, but unfortunately, after a strong rod bend it came off. Robban’s fish was of perfect sashimi size of 90 centimetres, so it had to go home, but mine was under 80cm, so it got freedom again. The fish continued to bite, and we caught a number of fish in good food size at this spot; the other boats also managed to lure some fish of a smaller size. We had a really lovely morning with occasional sun and no wind, but after a few hours, the wind started to pull down from the north, so we went to a place closer to Havöysund. The new location turned out to deliver immediately when Hasse in boat 10, who during the morning had landed the first Halibut of his life, managed to dust up another Halibut and, in addition to that, his first approved (over 80 centimetres). I had just changed the boat for a drift in a little deeper water (30-35m), and Stefan, who had previously had hits from several Halibut but failed to hook them when suddenly he got on a Halibut which he managed to hook, and this time it stayed hooked, and he could finally fight the first Halibut of his life to the boat that measured 111 centimetres. After we had been out on a little cod fishing trip without any special result, we put the last bright hour of the day on another new Halibut spit.

Robban, who had really liked the spin fishing, managed to hook in a big fish on his third cast who made some really good rushes and offered a great fight. The fish was not as big as we imagined during the fight, but a Halibut of 110 centimetres. Shortly after that, Roger gets a bite that he unfortunately missed, and the fish went straight over to Stefan’s baitfish, and he managed to hook this fish as well, which measured just over a meter.

The next day offered a lot of landed small Halibut, and the day after that, we, unfortunately, had to spend on land due to strong winds and rough seas. So it would take until Monday before it started to happen again. On Monday, the winds were manageable, but the sea was really extreme; however, we had the opportunity to move to the area just outside Havöysund on the west side where we were sheltered from wind and waves, it turned out to be world-class. On the first drift of the day, it took no more than 10 minutes before Robban hooked a fish of 95 centimetres on spin fishing gear; it fought really well in the snowstorm. The angle of the drift was perfect along a long edge, and I let ourselves float on the same drift for a long time; I look up at Roger in the bow, and he sees his rod bend in two! The fish pulled right in under the boat, and in the messy weather, it quickly became a bit of chaos, but after straightening the different lines to the right and left, we had control of the situation. The snow and hail thundered down over us, and Roger struggled with the messy fish, which was without a doubt quite a heavy fish, but after a while, he started to get the fish with him, and I could then land the fantastically nice fish that measured at a nice 156 centimetres. The fish got the freedom again after some pictures. After this, Stefan managed to pull a Halibut just under 80cm, which also got to swim on. The other boats also managed to land a number of Halibut between 80-90 centimetres, so perfect for taking home in the box. Shortly after lunch, Larsa hooked a really heavy fish in boat 12…

Tuesday was our last fishing day, It looked nice, and we could finally fish a little more unaffected by modern nature. However, the snow would continue to fall, and it really did. When we started fishing, it took no more than a couple of minutes before Timander, in boat four, managed to land the first Halibut of his life at just over 80 centimetres, a great start to the day. Shortly after this, Nicklas, in boat 12 right next to us, landed a fish that fought hard and measured in at 109 centimetres, which was completely magical as Nicklas longed for a fish! I had changed for the second drift of the day and tested a little shallower, I saw something big coming in along the bottom, and from what I could tell, it was a Halibut, but it was a bit unclear when the echo disappeared from the picture quickly. It took a few minutes, but then Robban’s rod started to bend, and he put the hook in a fish that set off in a completely INSANE rush, everyone started cranking up their baits, and the fish never stopped, we started to get nervous when we saw that the line started to run thin and we still had not picked up all the baits so I could run after it. But when I was finally able to start driving after that, the fish finally stopped, and there can not be much more than a maximum of 50 meters of line left on the reel!

The fish was heavy, and we had already calculated that it was big; it did not make much of a difference after this brutal first rush, but after Robban worked back all the line and we got to see the fish a bit down, it wanted to offer another rush down to the bottom. Everything went well, and I was then able to land Robban’s new PB at a full 162 centimetres! The fishing continued in this area, and we had a lot of contacts, so it was only a matter of time before it would go off again; Nicklas in boat 12, which was on fire, even managed to hook in a really good fish of 120 centimetres which offered a cruel fight and a new respectable PB. A while later, I drifted in really well towards the position where the 162cm fish hit, then Robban hooked a fish of around 105 centimetres on the spin fishing gear, and the second I lifted this fish into the boat, his other rod had a fish on his baitfish rod. We were in the exact same place where the previous big bite put us, and I heard behind me that “Bro, this is also big!” and I had to throw myself over the controls when the fish began to pull in under the boat. The fish also offered a good fight on the shallow water, and we could land another really fantastic fish of 155 centimetres to Robban! What a magical end to the week, and the season, as the guys were really happy, as we got to fight in the extreme cold during the week, but in the end, it paid off.

Now we clap again for this year, and we want to thank all the fantastic guests we had during the year for a great season and hope to see you again next year!
Tight Lines // Douglas Dahlberg & Andreas Hugsén

If you would like to learn more about this fantastic sea fishing tour and all our availability for both 2022 and 2023, you can find more information on the full tour page. If you would like to speak to one of our sea fishing team members, you can contact them via 01603 407596 or by emailing them at info@sportquestholidays.com and they will get back to you as soon as possible.