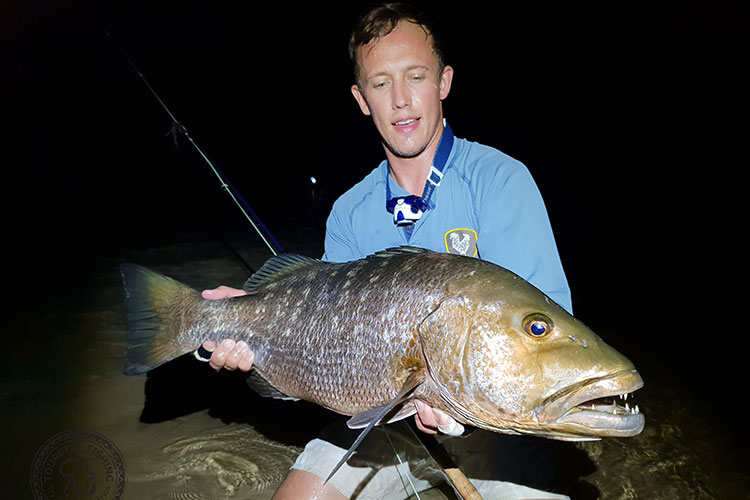 Cant believe it is already week 3 of the season and many anglers dreams have already been fulfilled. After last weeks huge Silver King these next set of anglers were already pumped ready for their trip. Ewan has kindly kept all of us up to speed with how Gabon has been fishing and with this next set of anglers, mostly wanting to fly fish, we were all looking forward to their results. Here is Ewan’s report:

Fly fishing at Sette Cama is certainly not your average day of casting flies to tailing fish. In contrast, you are blind fishing in pounding surf, often fighting wind, and a big portion of this is done mostly at night. So it’s most definitely not every fly fisherman’s cup of tea, but for those who persist, will often get rewarded with a fish of a lifetime.

Fly fishing at Sette Cama is certainly not your average day of casting flies to tailing fish. In contrast, you are blind fishing in pounding surf, often fighting wind, and a big portion of this is done mostly at night. So it’s most definitely not every fly fisherman’s cup of tea, but for those who persist, will often get rewarded with a fish of a lifetime.

So the tone was set for our new group in camp, a majority mix of fly fisherman and a couple guys working the surf with lure.

The morning session’s were dominated in the estuaries

by massive shoals of hunting jacks, and the guys really made the most of it. Some spectacular sized fish were taken on fly and most of the anglers quickly realized that these fine fish should not be underestimated in terms of fighting power. Not as dirty when it comes to fighting/finding structure like their Indian Ocean cousin’s, the longfin jack will put your tackle to the utmost test and often turns into a war of attrition. None the less, the lads had a great time and we landed ample amounts of fish each morning that kept the guys happy, but also warm and ready for the night time assault in the surf.

The evening sessions in the surf started off with some spectacular catches of cubera snapper feeding in the shallow surf. However, as the week progressed the snapper bite continued, but the tarpon became more and more active. As the dropping tide grew stronger, massive shoals of tarpon and snapper moved into the mouth area, hunting in the dark of night, giving the anglers and unreal audible experience. Smash after smash, baitfish were being destroyed. The animal world can be an extremely cruel one, but the sound of one giant feeding frenzy at night that can only be described as sounds of someone dumping 1000’s of piano’s into the water over a period of a couple hours, is truly an

experience! Despite all the chaos, when the fish are feeding like this, they are very focused on the exact baitfish around, and often you struggle to entice them to take a fly, never mind a lure. The lads worked hard though, and hooked just over 16 tarpon on fly, but could not convert any of them unfortunately.

Overall a really exciting week with loads of fatigued, but very content anglers.

What a super report and losing that many Tarpon must of been sole destroying for the anglers, but thats fishing! Looking forward to the next instalment……