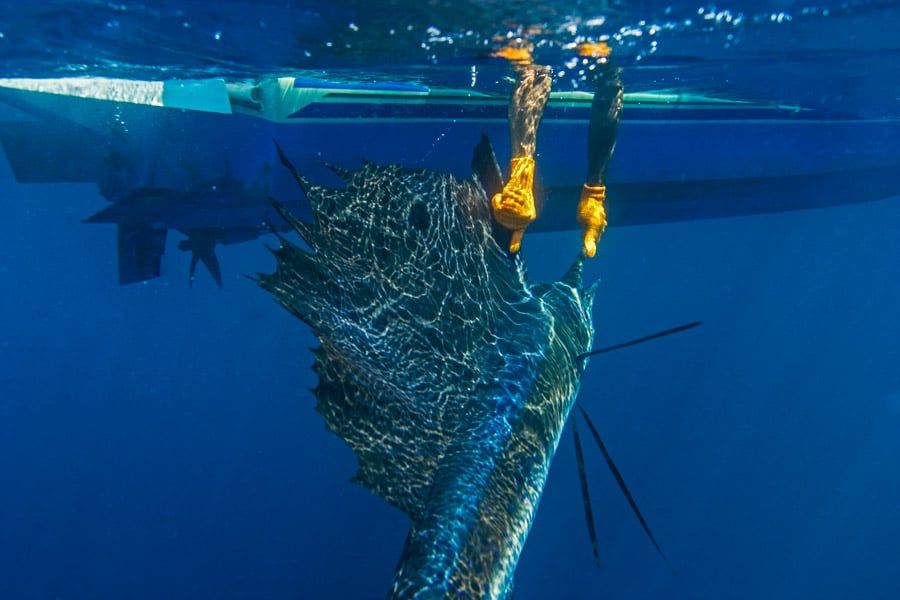 Firstly just to let you know that its 30 degrees at Crocodile Bay today with a very light breeze and low humidity, a perfect day to go fishing. It must be the same back in the UK except you would be ice fishing ah ah. After another fantastic meal last night in the restaurant, we retired early because I hadn’t paced myself yesterday. Chris and I were up wide-eyed and bushy tailed for breakfast at 5.30am yes this isn’t a jolly. Today we were on a Strike Boat with Captain Manuel (Sorry I called him Manwell from Barcelona the other day) and Humberto as a mate.

6.30 on the dot with our boat loaded with food and drinks, and the bait well full we headed out to the deep water. I had a feeling it would be good today, the water looked different to me more blue with a sparkle. With all the lines out and the teasers flashing we looked like a well-oiled team. After only 10 minutes I hooked a Sailfish, the reel screamed and the fish was tail walking about  200yards away and the hook fell out. I wasn’t that well oiled.30 minutes later a Striped Marlin hit the teasers and then ate the dropped back bait, I thought this is it. I gave it the mandatory 5 counts, closed the bail and wound down, the reel smoked and line tore off the spool. The boat is going 7 knots and I reckon the Marlin was going 20 the opposite way, I had 500 yards of a line so no problem. After about 200yards the hook just fell out, I was gutted.

Next, it was Chris who had the bad luck, I couldn’t believe it his Sailfish just came to the top and fell off. It was now 3 to the fish none to us. 30 minutes later our look changed and Chris skilfully got a nice sailfish alongside the boat (I wish I had a polarised filter on my camera).

At least we were on the scoreboard. We searched miles of ocean for the next few hours, I did see some free jumpers so we were in the right area. During the next few hours we saw another 6 Sailfish chase the teasers but refused to eat our baits, that’s why its called fishing and not catching. I spent a lot of time up in the tower, the visibility is many times greater than on the deck. Plenty of Dolphins around all having loads of fun chasing our boat. Suddenly from know where a green-blue flash lit up behind the teasers, no mistake this time, it was a Mahi Mahi. This time I was like a very hungry Tramp on Chips and made no mistakes. A good hook up, several great jumps and the hook held firm I got it to the boat quickly and became cameraman with Chris on the rod, the fish was still hot and screamed off and I got some nice pictures.

The fish lit up and its pictorial fins were bright blue.

We soon had it back alongside the boat, this time you could see the  fins glowing blue.

Captain Humberto skilfully lifted it on board for a quick photo.

Almost  all the fish caught at Crocodile are released to fight another day. Circle hooks only and minimum time out of the water. Sailfish and Marlins used to come on the boat for pictures but not any more, it is not good for the fish. Once again Humberto’s fan club will be disappointed he wasn’t in a fishy photo. However he didn’t see me take this photo of him rescuing his cap that had blown off his head. It normally only ever happens to the Anglers. He tried to keep it quiet.

Tomorrow is our very last fishing day, We are with Humberto on a Boston Whaler, I think we will have the same plan as today. I have written this early today, that means I can have an extra glass of wine with my dinner. More than one and I fall asleep. Reading about the weather in the UK it might be a good idea to stop a bit longer.