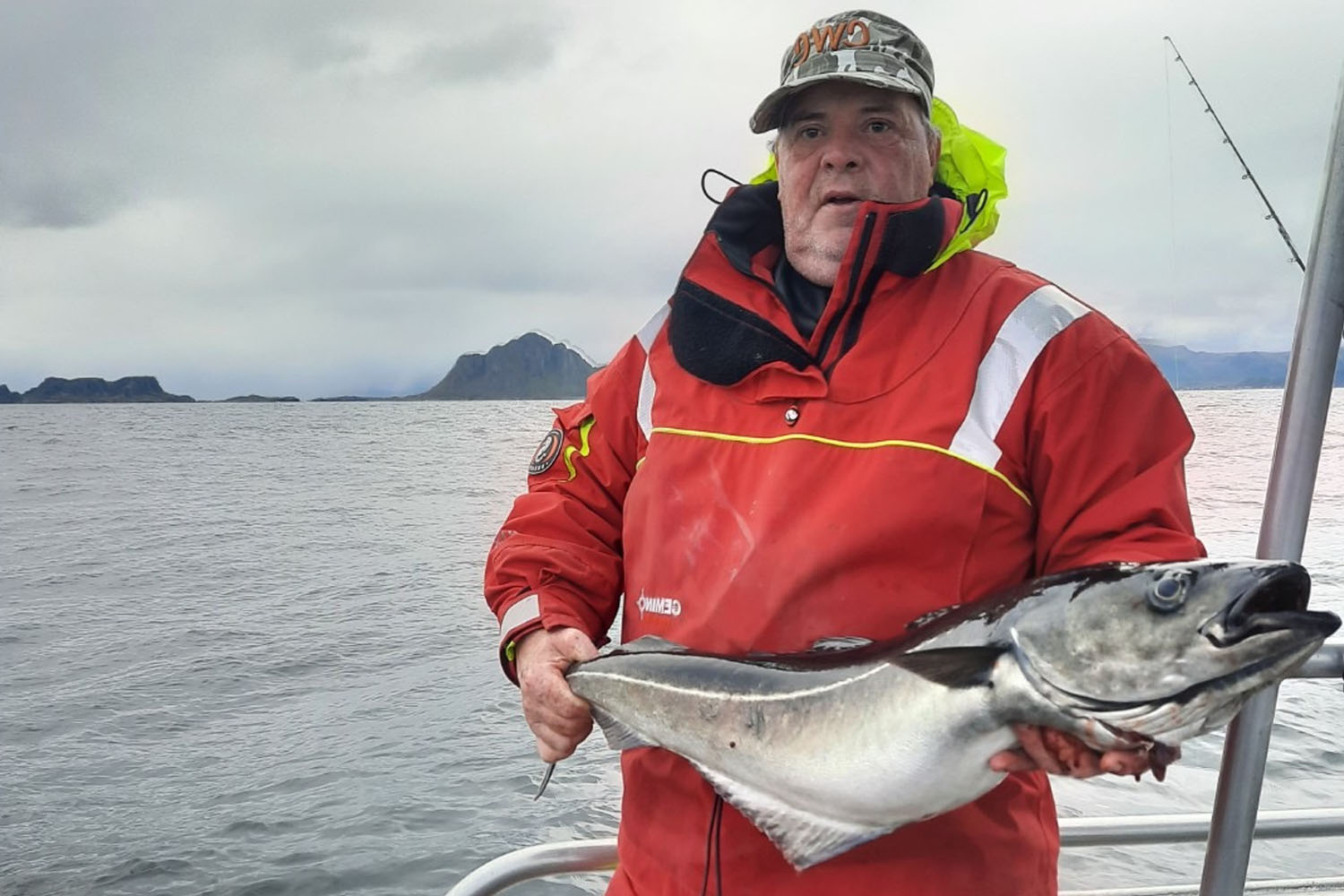 The first half of this week has been characterized by demanding weather and slightly slower fishing than normal. Already on the day of arrival, several of our groups, who arrived earlier in the day, chose to head straight for the open sea on our west side. Because it was much more fun than what the coming days had to offer. At 18:00, I Decided on the guide boat, with Kristian as guide, to set course towards the west side. After a bit of searching, Kristian found some Cod down at 70 meters in a so-called “hole”. This resulted in some nice Cod with a top fish of 11 kilos. In the meantime, boat 3 had positioned itself against a lagoon 15 minutes away from the camp. They had a target for Halibut. It didn’t take long before a Halibut around 1 meter inhaled a 300 gram jig. They also caught several Cod in the 4 kilo class in the same area this evening.

The next few days the wind increased, and the fishing became a little more demanding. This stop really didn’t stop our groups. The guide boat spent a lot of time around the outer edge and coves around the camp. This resulted in a Halibut of 91cm. Kristian could also report several good bites and a Halibut that rustled away with the bait, but eventually spat the bait out. Dan in the guide boat also got a new record for Pollock. 5 kilos! So there were several record baths in this group during the week!

On Monday, there was finally some weaker wind and better weather! It was this day that all the groups had been waiting for. I (Alexander) went out in the boat at 1 o’clock at night, heading west. We had one target this day, and that was Cod. When we got out of the passage, there was some residual sea after the windy days, which later subsided into the evening. We started searching the shallow tops to see if there were any chasing Cod on the shallows. Already on the second base peak we visited, a Cod in insanely good condition took the 400 crazy daisy jig to the fisherman Jørgen. For a start, and for a fight! There were some nice Cod on the tops before we decided to lie down a little deeper in a channel just below. There we immediately saw that we had found a nice place. There were several nice Haddock in the three kilo class, and some good Cod that approached the 7 kilo limit. A few hours later, Bo also arrived driving boat 6 with our Dutch guests and Kristian in boat 2 with the other Swedish group. We planned quickly as the swells had subsided so much that we wanted to try further north-west. There really was some crazy big fish fishing! Soon after arrival, one big win after another was reported! With top fish close to 14 kilos, it’s hard not to have a smile on your face. There was a great atmosphere in all boats with lots of laughter and humor. Good catches of chasing Cod were also reported during the big win race. The Cod that came up was in the 5-10 kilo class. It’s always just as cool when Coalfish and Cod hunt together in a real fishing race!

Boat 1 with Claus and Esben chose to spend the day inside the islands on the west side, in search of Haddock and Halibut. They started fishing this day by fishing for Haddock, which was a huge success with several nice Haddock and a top fish of around 3.5 kilos. Later, they had moved a little further south towards a place with incredibly good bottom conditions for Halibut. There they got two very handsome quail of 93 cm and 103 cm. What a fantastic day it was here at Vesterålen! On the last day, the weather changed again and we had to lie inside the fjord again. It resulted in a short day with more Pollock, and a nice top fish in the 5 kilo class. It was a short day because of the increasing wind.

We want to thank our groups for a nice week and welcome back.
//Alexander Brøther, Kristian Hausken and Bo Gustavsson.