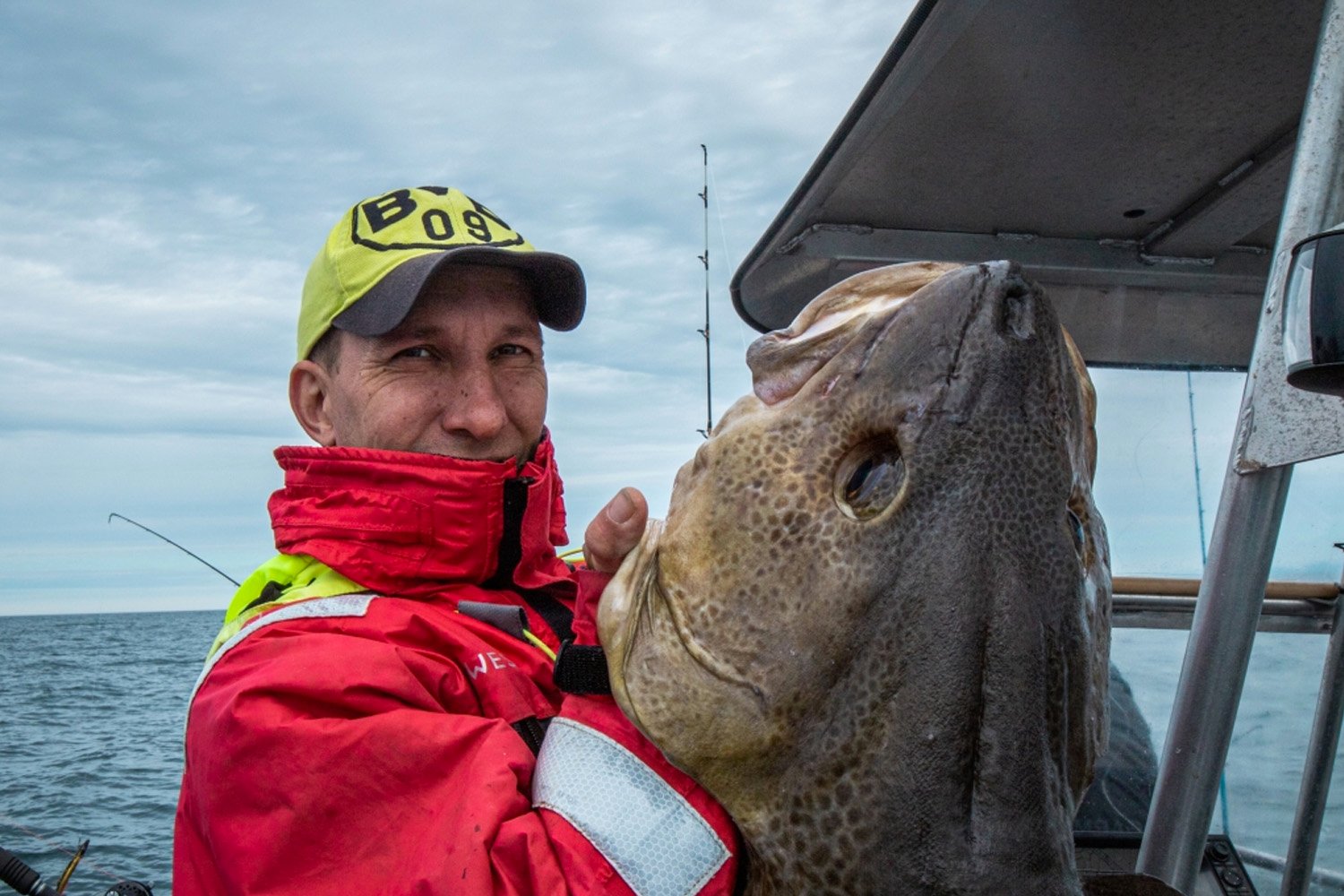 Another week is over in Vesterålen, and although the weather has been impeccable for most of the week, the fishing has been quite difficult. The gang arrived late on Wednesday evening, and the weather forecast already showed that Thursday would be a magical day. During the information meeting, we were already in the mood to go on our fantastic long trip outside Vesterålen. So we based a plan on this, and decided that at 6 in the morning, we would drive out in a united troop towards V-berget.

The morning was absolutely beautiful. The sun was shining, and there was not a single breath of wind. All the guests were super excited for this long tour, and most of them had been here before and knew what the long tour had to offer. The waves were flat, and the only thing left of the rough weather were some half-sized swells that you could surf nicely all the way out. Once there, there was the usual feeling that anything could happen. And as usual, the Pollock were in full numbers, and we started by hooking 2 real Cod right away. Robert from Germany landed the first fish of the day, and as a first-time traveler, the smile stood from side to side when we were able to bring in a coarse Cod of around 15 kilos. We continued to fish around the shoal, but very little happened. We therefore took several of the boats with us to the long edge for a little action, and it didn’t take long before we hit the edge. And when we hit the edge, all 4 bars were straight down. And after some fierce battles and laughter from the guys in the boat, we were able to land a whole 3 Ling that sniffed the 20 kilo limit! A completely crazy start at this place, but we only did one drift until here, because we didn’t want to take more time. The Swedes in boat 2 reported at the same time as our 4-cut on the Ling, that they had just lost a big Halibut right by the boat! I got to see the film on land, and quickly guessed that it was somewhere around 180-190 cm.. It was really cool that it won this fight, but I think the experience for Stefan is probably what stands out the most in my memory!

After we moved from the long edge, we bet with large baits for both Cod and Halibut. It didn’t take long before we made contact with large Cod, and the country has several fleets of fish between 12 and 20 kilos. Although we wished for the queen from the depths, It certainly wasn’t easy for me to get her to bite, and it didn’t work with the Halibut. The Stockholmers in boat 5 got the biggest Cod of the day at 28 kilos! And even though the whole wood was somewhat slower than what it was before, many nice catches of both Cod and Ling came up! You can’t complain when both weather and fish are flapping…

On day 2, the Guide boat with several boats went out on the west side. Today’s goal was a bit of mixed fishing, and some boats put all their cards on the Halibut. The Halibut were really not in the mood, and after 4 hours of fishing in the Guide boat, it was time to try a little on the Ueren as your plate along the entire deep edge that stretches from Eidsfjord and northwards. The Uer was as usual in the attack, and there were nice catches of Redfish with the typical average size of around 1-3 kilos. Boat 2, which had lost the big Halibut the day before, pulled away with not just 1, but 2 (!) raft Halibut of around 110-115 cm. Therefore, both were taken at a depth of 100-150 meters… A depth you usually don’t use much energy after the flate. Boat 6 was not far away, and they could tell that they had a 140-150 cm fish that followed one of the Coalfish they had hooked all the way up to the boat… So it was quite clear that something was happening at depth. During the Redfish fishing in the Guideboat, Alex saw how one rod bent straight down vertically during upswing. It started rushing down towards 200 meters again, but unfortunately it came loose after 20-30 meters. And up there comes a Redfish. A Redfish that you are totally screwed over the head. And you can imagine what has happened here…

On Saturday, there would be a small window of fine weather early in the morning, so I took the gang in the Guideboat out at 6 in the morning to give it another shot at Halibut. It was a beautiful Saturday morning, with no wind and cloudy weather. Today the electricity was good too, so the whole thing felt hot. We put up some nice drifts in areas where we have had very good fishing before, but it just didn’t work. The Halibut were just nibbling on our baits. I could see that there were more fish coming up to look at our things. But it remained without further results. And it was tough for all other boat teams, but boat 6 managed to lure up a smaller Halibut after a while. When we got to lunchtime, the wind picked up, as promised by the forcast. We therefore called in the boats, and would continue fishing further into the fjord. I had a place that I wanted to test on the way home, and drove straight to the outer edge of the Jørnfjord. Here there is a nice sand chute with several nice shelves all around. We therefore put a drift in this place, but the wind did not make it easy. Operations were running late. But we drifted up the edge and came to a nice shelf. I look back to check that the next gust doesn’t catch the boat sideways. When I look back in the bow, German Frank is hanging over the railing of the boat. I immediately think it’s your bum. But the rod tip moves, and it’s a fish that has taken Frank’s Mackerel! I run forward and turn on the crank and hear it rush out. Finally I thought. After the outing it was heavy, and Frank started pumping. It didn’t take long before I could see a nice Halibut that sat perfectly hooked with a circle hook breaking the surface. I secure the fish, and the jubilation can finally be unleashed. Frank on his first sea fishing trip, with his very first Halibut of 101 cm! It was an absolutely perfect end to a tougher day.

When Sunday came, yr had reported real bad weather. With strong winds from the west we were all very limited. It was not possible to go out from Jørnfjorden, and there were not many hours combined on all the boats either. It rained and was bitter, and when the weather forecast for the next few days promised fine weather, many chose to take a short swing outside to get some fresh air. Apart from some nice food Cod, the fishing was not that great.

In the Guide boat we chose to test out an area further south, and took boats 5 and 6 with us. The Halibut fishing had been tough west of the camp the previous days. That’s why we wanted to try other areas, without this being particularly successful either. The area has delivered earlier this year, but it was no more than a bump and a few climbs after a few hours of fishing. We therefore moved quite immediately, and gave the Cod a try instead. Fortunately, these were in the attack today, and there were some nice Cod in shallow water, with a nice top fish of about 15 kilos! A little further north of us was boat 2, which had really broken the fishing code this week. Inside a shallow sandy bay, it hit again for Stefan, who had lost a giant fish on the long trip. And after an intense fight, they were able to secure a nice Halibut of 140 cm which later got its freedom back.

The last day of the week would again be good weather. Alex took the guide boat out on the west side for some mixed fishing. They gave the Halibut several hours, and this time they would come into contact with a good fish which unfortunately spat out the baitfish after holding it for a good while. Of course, the gang got excited about this, but there were no more contacts, and it almost started to get frustrating. That’s why Alex laid down on a shallow peak, where they had great action on bottom-chasing Cod! Although it wasn’t the biggest individuals that cut the baits, it was most welcome after a few slower hours of fishing. The Swedes in boat 3 came across a huge shoal of Haddock at 50-60 meters, and got several nice specimens that smelled at the 3 kilo limit. As the day drew to a close, the Swedes in boats 5 and 6 decided to lay down in the vicinity to give the Halibut one last try. As it ticked towards the last minutes of the day, it was finally going to happen! Just minutes before they were about to give in, something sick happened to Johan’s Mackerel. He gave the fish some time, and smack! Solid fish, and the fight was on. The fish started with a brutal attack, but gave up quite nicely after a few minutes of angling. Down in the depths Magnus was able to spit the Halibut to Johan, and was then able to secure a nice 152 cm Halibut for Johan! Big congratulations, and what an end to the stay… Buddy boat no. 5 was nearby and had several contacts. When it started to get close to the end for them too, it hit Marcus. The stab was brutal, but not much happened after that. It was like driving a garbage bag. Just dead weight. And not entirely surprisingly after such a tame fight, a Haddock appears by the boat! An incredibly unusual fish that chose to cut the jig right before the last minute of fishing! Unbelievably cool, and on land we could weigh it at a little over 6 kilos. Something that was an incredibly fun end to the week here in Vesterålen..

Now we’re adding a new week with a full camp and new fishing passes! We also want to thank everyone who has been at the camp the last week for an incredibly pleasant week. The weather promises well, although I think the long trip will have to wait until the weekend, so we should probably get out to the good spots closer to the camp the first few days.