It is this morning that I write this with an extremely heavy heart and even though I am a man in his fifties I am not ashamed to say that last night when I was told the sad news that I shed more than a few tears.

Moana was a guide like no other, for anyone who was lucky enough to fish with this man will tell you. I sat and worked out last night that I have spent over 20 weeks on Christmas Island hosting trips over the years and consider it a real privilege that I not only got to know him so well but also to have shared lots of laughs with him both on and off the saltwater flats.

His passion for guiding was as strong right to the end as it was when he first started over 40 years ago. 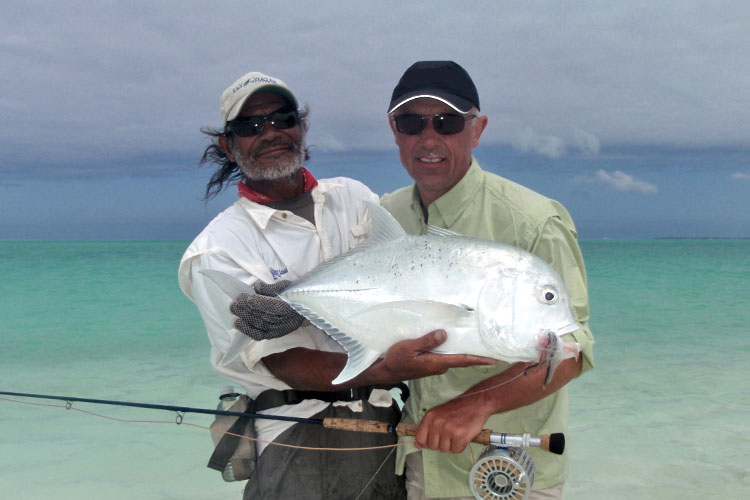 A very old picture of me with Moana and my very first GT on a fly, what a privilege. 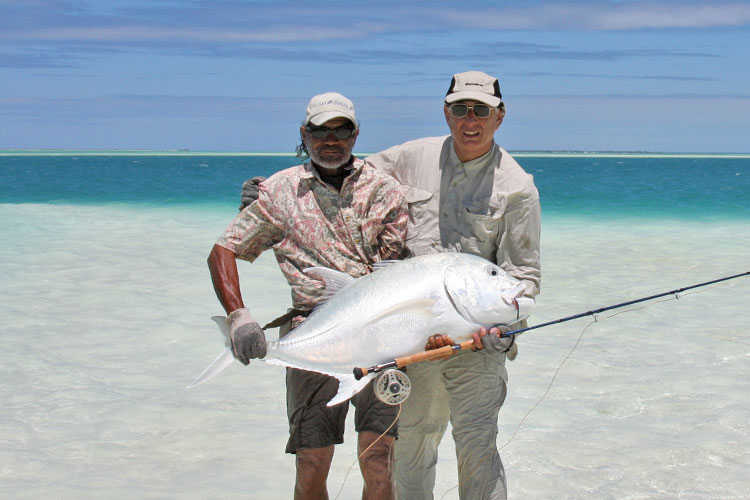 Moana put so many customers in the right place at the right time to catch their first ever GT on a fly, simply the best.

His experience and knowledge was really second to none, this man just had a built in fish radar. His attention to detail and thirst to understand why and when fish were being caught, led to him knowing every flat inch by inch and therefore knew exactly where and when the fish would be. I can honestly say I have learned more from this single guide than all the other guides I have fished with around the world. 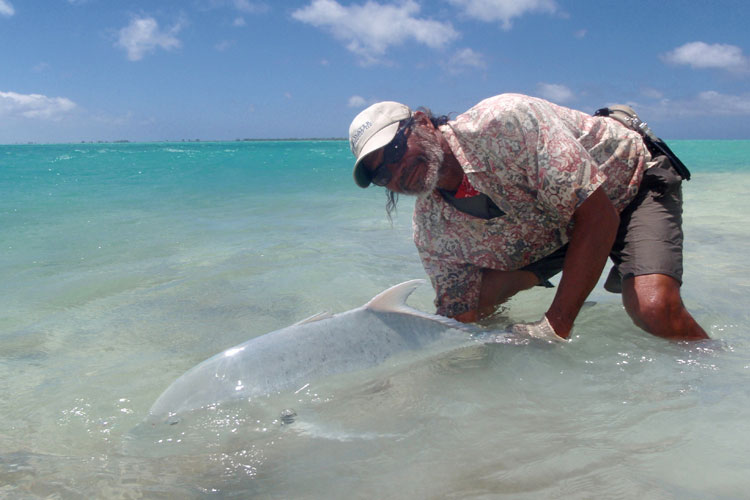 Moana also loved to fish, so when we had caught a few it was always a pleasure to let him have a go with the rods. Plus it was so enlightening to actually what him fish.

His tone and gentleness with customers was also unique, he had the patience of a saint and the most calming voice ever. I have only ever known him to once raise his voice and get over excited. We had been fishing a small flat in search of GT’S, it was the end of the day and time to depart, Moana climbed aboard the outrigger first and we passed up all the fly rods. As we climbed on board Moana just started shouting GT, GT, GT. take the rods, take the rods. I had never heard or seen him like that before. As we turned around we immediately could see what had finally made this man lose his calm. It was the biggest GT I had and have ever seen. As we started to approach this monster of a fish working down the flat in a very aggressive manor Moana told us that it was by far the biggest GT he had ever seen in his life. As the fish approached even closer we cast, it was then that we really could see the size of this fish. We were nearly up to our belts in water however the dorsal fin and tip of the tail were above the water. The fish followed the fly until we had no line left to strip at which point on seeing our legs in the water it turned abruptly on the spot, which resulted in the huge wave and splash that went completely over our heads. We laughed all the way as we walked back towards the boat. 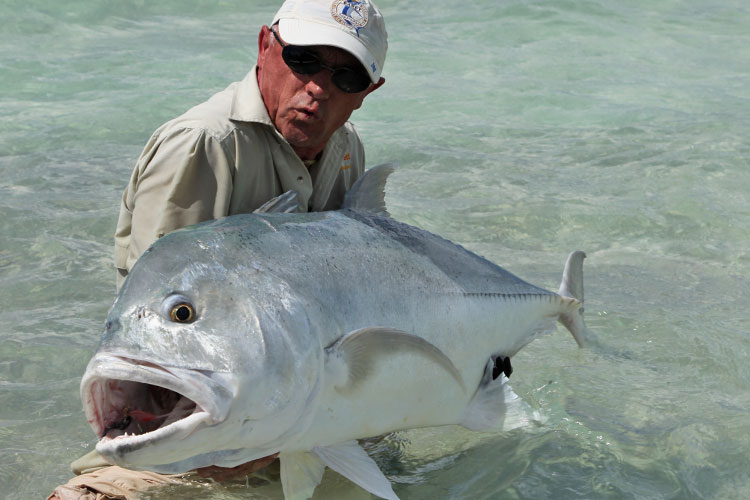 Over the years he put me on to some monster GT’S that we caught on the fly. It was such a pleasure to be out on the flats with this man.

He had a true love for his home Christmas Island, he loved nothing more than to share stories about the island and what island life was like, plus how it had changed over the years. On our last trip he took a day off from fishing to show my partner Tracey all over the island. He took time (something Moana was always happy to give people) to show her his home, the schools, hospital, community churches, how people lived and even took the time to explore with her the nature reserves to find the rare Christmas Island warbler bird. I remember as if it was like yesterday to have Tracey return from that day so full of excitement about what she had seen and done with Moana on that day. Something I was unable to do as I was hosting and something I will always regret that I had not done. 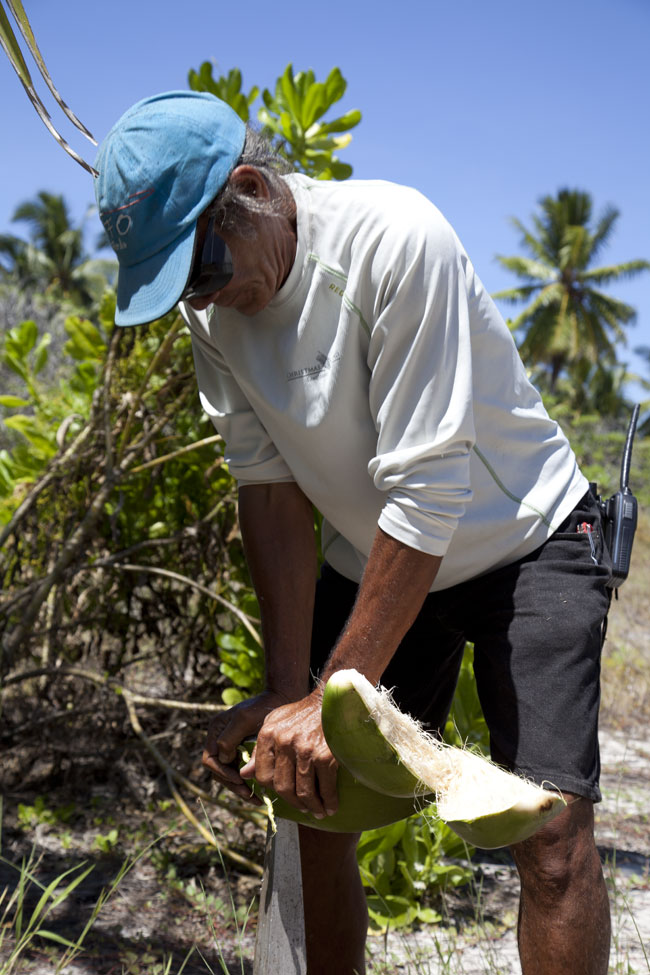 Moana taking time out to show Tracey around and how to perfectly strip a coconut something Christmas Island is also famous for.

He was also a great family man, he was extremely proud of his children who had all exceeded in their education and had left Christmas Island in search of better career prospects. Unfortunately Moana lost his wife a couple of years back. If you could have seen how this man took such good care of his wife who was poorly for a long while. It was heart warming to see him take care of her. I know it hit him hard when she passed although he was not a man who would show it in public. Well my friend you can now be together again. 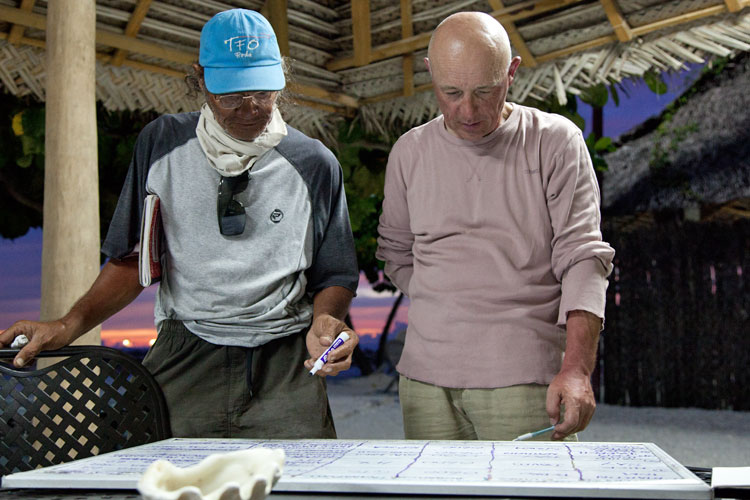 Only a few months ago, Moana and myself making the plan for the next days fishing, for all the guides and customers, boy I am going to miss you.

Moana, I am sure you are already exploring the never-ending flats on the other side and when my time comes you will do me the honour of guiding me again.

Rest in peace my friend

After the excellent news we recently received in regards to the world opening up once again, travel is starting to resume back to some form of normality. However, there is so much to consider regarding...
Read More >
ATOL Protection – We Have You Fully Covered, But Not Everyone Does

With great pleasure, we can now announce that the CAA (Civil Aviation Authority) has renewed our ATOL licence for 2022.  For anyone who doesn’t know, ATOL (Air Travel Organiser’s Licence) is a government-run financial protection...
Read More >
Choosing the perfect Fly Fishing Travel Bag

We get asked regularly about travel bags and cabin bags, and with the current market being filled with hundreds of options for fishing luggage, it can seem quite daunting and difficult to decide what you...
Read More >
Stay in Touch
Sign Up To Our Newsletter
Sign up to our weekly newsletter to get the latest travel advice, offers and adventures.
Sign Up Now
Request A Brochure
Our inspiring, free brochure is packed with incredible travel inspiration from every corner of the planet.
Request Now
Submit An Enquiry
Our experienced team are always on hand to help you with any questions or advice you need.
Enquire Now