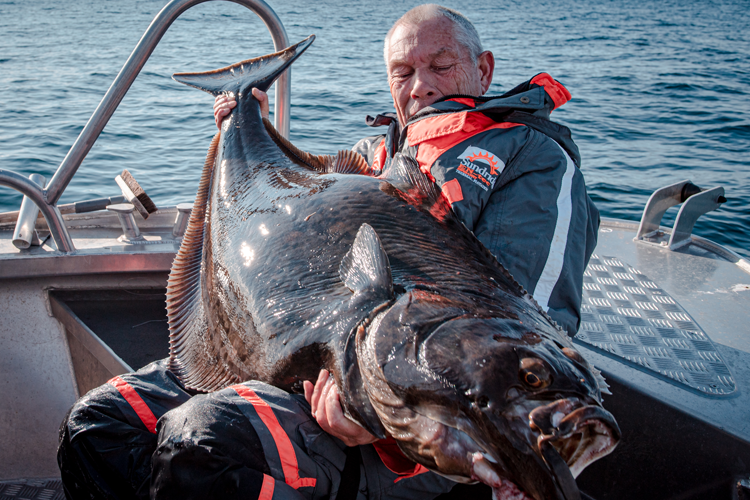 The Autumn fishing is now well and truly underway in Havöysund, and the Halibut have been aplenty, with lots of nice fish over 150cm landed already!

Another week has passed, and the last set of guests have just left the camp. Unfortunately, the week hasn’t been the best weather-wise, but it’s yielded lots of big fish! Initially, we had strong winds from the northwest, limiting the spots we could travel to and fish, but we can usually always find somewhere.

We spent the first day trying to find as much cover as we could, protecting ourselves from the wind and waves. We dropped into an area where we’d previously had some excellent fishing, and once again, we weren’t disappointed. After a couple of hours, boat four shouted across the radio that they’d just landed a Halibut of 150cms. A little while later and boat eight was also in on the action. After a good fight in shallow water, another fish of over 150cm was landed, this time a fish of 151cm. Those were the biggest fish of the day, but the anglers were kept busy with plenty of smaller fish between 100 to 130cm.

The wind was simply too bad to get out offshore during the second day, but the water close to the camp was still fishable. Boat six made the most of the situation and went out and enjoyed some nice sport, landing some small fish to around 80cm.

On Saturday, the wind showed no signs of letting up, but unlike the previous day, we managed to get offshore to the area where we’d caught fish a few days earlier. Tommy, in boat ten, landed the best fish of the day, with a lovely fish of 154cm.

Finally, on Sunday, the weather took a turn for the better, and we were able to get a little further offshore. Everyone was keen to get out, but unfortunately, the fishing was a little tricky; all the boats and anglers managed fish, with a smattering of Halibut over 100cm. The biggest fish of the day fell to Patrik and measured in at 158cm.

In the guide boat, we landed most of our fish on small baitfish, but on the way home to the camp, we stopped at an area that had previously been kind before, for a spot of spin fishing. We managed three Halibut really quickly, the biggest of which measured 118cm.

The weather was even better again on Monday, and we finally managed to get out on a proper big fish hunt. Leaving the camp, excitement levels and expectations were high! By the time we arrived at the mark, a few fish up to 110cm had already been landed, and Andreas, on his own boat, had hooked and lost a really big one.

After a couple of drifts, we moved to a slightly different area, and as the water shallowed up to 40m, Cor hooked into a fish. His dream had always been to land a fish of over 125cm, and during the fight, we all thought it was his moment, but it wasn’t quite the fish he was looking for, measuring 118cm. Nevertheless, it was still a lovely fish and a new PB for Cor.

Shortly after this boat ten shouted over the radio, Tommy was once again in on the action, hooking and landing a lovely fish of 158cm from just 15m of water. Right at the bottom of low tide, I saw a nice fish on the Sonar and managed to tease it into taking a bait; the second I passed the rod over to one of the Dutch anglers on board, I knew it was a good fish. The fight was heavy, but soon a beautiful fish of 170cm was by the side of the boat. A few moments later, Andreas was in on the action too, with a fish of 150cm easing the pain of losing a bigger one earlier in the morning.

The last day of the trip offered some magical weather, and we were all able to get well offshore to a new area we’d wanted to fish for a while. On just the second drift Ed, on the guide boat, hooked into a nice one. Ed had always wanted to catch a specimen Halibut, and despite landing plenty of smaller one’s earlier in the week, the big girls had eluded him. Until now! After many line stripping runs and an unforgettable fight, he was soon having his picture taken with the fish he’d been after, a fine specimen of 158cm.

The day continued in the same vein as it started, and many fish over 100cm graced the boats, Ceec was in on the action with a fish of 146cm, and Cor landed a brace measuring 122cm and 138cm.

Boat four, who had been fishing a completely different area, had hooked and lost a really big one, but not getting too downhearted; they got rewarded with a fish of 154cm. Boat eight had taken a slight gamble and fished the area where we’d started the week, but the decision worked out well, and they also managed fish over 100cm, with the biggest measuring 150cm. Back at camp, they told us what a strange fish it was too, as it didn’t take a single centimetre of line and was simply hooked and guided up to the surface!

Despite the odd day of unpredictable weather, the autumn fishing is now well and truly in full swing, and we are super excited for what the next few weeks could bring.