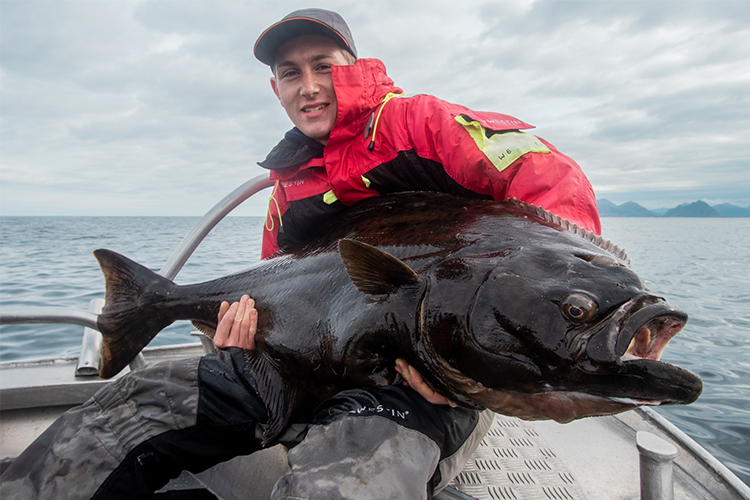 Vesteralen is on fire at the moment! We dont think a day has passed without a 150cm Halibut this season! We are all wondering to see if a new World record rises to the surface soon!

For now its over to Daniel Freland, Jørgen Zwilgmeyer & Håkon Nilsen for their report of the week!

Another Amazing Week in Vesterålen

Another week in Vesterålen is over, and we have already started a new one with new guests. The weather has been at its peak the past few days, and our English guests from Sportquest have had some real dream catches! Unfortunately, the coming week does not look very promising weather wise, but we will do what we can for the guests to catch fish!

The Sunday just gone, had some difficult weather conditions. It was still possible to cross the fjord on the other side of the Eidsfjord, so we did. Mark and Ian in boat 6 had a really nice day fishing in the wind, and manage to get a really nice Halibut of 135 cm just a short distance from the camp! There was a lot of smaller Halibut on the other boats, and even some nice Cod on some of the many marks that are nicely scattered around Eidsfjorden!

On Monday, it was finally going to be good weather with little wind, so the boats set course north where we have tested several new marks. Daniel and Håkon followed Ian and Mark north and had Halibut as the main goal of the day. On one of the many drop-off edges further north, it was not just the Halibut on the feed. The big Coalfish were also out for a meal and the boat managed to get some great fish landed between 10 and 15 kilos. There has been a lot of Coalfish that have reached lengths up to 126 cm! In one of the new marks we have found, there is an incredible abundance of species! In the same drift, you can get Cod, Coalfish, Haddock, Halibut, Greater Argentine and Redfish! This edge holds insane amounts of fish, and you can test different methods and target most things here.

During a drift, we threw in a large baitfish. As at the surface, there are large amounts of Coalfish in the 1-3 kilo class, and it seems that the Halibut just love to smash them! It did not take long before our rod bent over, and a fantastic fight was on! Daniel was able to secure the fish after some nice fighting and heavy lifting! The fish measured to a full 163 cm, and was put back nicely after some pictures. Later in the day, they tested several of the runs that are only a few minutes inland towards the mainland, and there was good action on the Halibut again! Several Halibut were landed, and 2 of these were around the meter!

On Tuesday, the good weather continued, and we were eager to test even further north where we had never been before! I followed in boat 3, and we left early. This new mark was full of baitfish from the second we arrived. It felt slow at first. There was no Cod being chased by the Coalfish, and all we could get was small fish. But when we drifted away from the shoal on a flat bottom, it went off for Sam. Finally, a Halibut was on the way, on the first drift of the mark! A beautiful Halibut of 121 cm came up to the boat. After a quick release, we changed drifts in this area. It did not take more than 5 minutes before it would slam for Jed too! This time a fish of larger size! Sitting at a depth of 70 meters there was no easy fight ahead, but after some nice runs we could land the Halibut on the side of the boat! It was measured to 135 cm, and was put back nicely again!

It seemed to die off after these nice Halibut, and we decided after a while to end the day with Coalfish and Cod! We led guests to new marks again, and finally, we found the Cod on a deep edge towards the depths. Here the Coalfish stood in the open water and the larger Cod pressed against the bottom. Shaun hooked a really nice Coalfish of around 14-15 kilos on a whole Mackerel, and some fine Cod of around 10 kilos were also caught constantly. Sam continued on with his crazy daizy and was about to get hit really hard! It all ended with a big mess where all the lines got stuck together. After a stressful session of messing and cutting, Sam’s line was free, and a rush was on again! From a depth of 90 meters, a nice Halibut came up to 111 cm, and after a couple of pictures it was put back nicely again! With Halibut we ended this week’s fishing and it was heading home towards the camp in glorious weather!

On Wednesday, our new guests arrived. We left in the morning to fish for Cod, and it was easy to say that the Cod were there! The real specimen Cod arrived, and we landed several nice ones of around 10 kilos, and many more in the 5-8 kilo class! Later in the evening we picked up our English guests from Sportquest in Sortland, and agreed on tomorrow’s fishing on the way to the camp…

At 6 in the morning we went out, and the conditions were absolutely glorious. The wind was going to rise later in the day, so we went out early so Sportquest’s customers could experience the fishing here in Vesterålen! It did not take long after we arrived at the fishing mark before we had a fish in the boat! The cod was on fire when we got there, and we got several nice fish in the 10-12 kilo class! We threw out a whole Mackerel on an anti twist rig during the drift, and when we got further out on the edge the reel screamed. Håkon weaved in the circle hook and gave over the rod. Another really nice Halibut ready to dance, and after a messy fight the fish could be secured! It was a full 130 cm, and it was towed back nicely. The current died off, and so did the fishing for a while. We looked around for a while and finally we found lots of fish! Sportquest’s customer turned to little jigs, and hooked up all the time! This day ended with a really nice victory race with several top fish in the 12-15 kilo class! There are really large amounts of Coalfish out on the deep edges here now…

The weather over the weekend here does not look very promising, with 18-19 mph winds out in Eidsfjorden in the coming days. If there is any fishing, it will now be here in Jørnfjorden which is well protected from wind and waves. We just have to endure the bad weather and see if the fish in the immediate area are triggered by rain and wind! Fingers crossed for better weather over the weekend, and that we can get out!