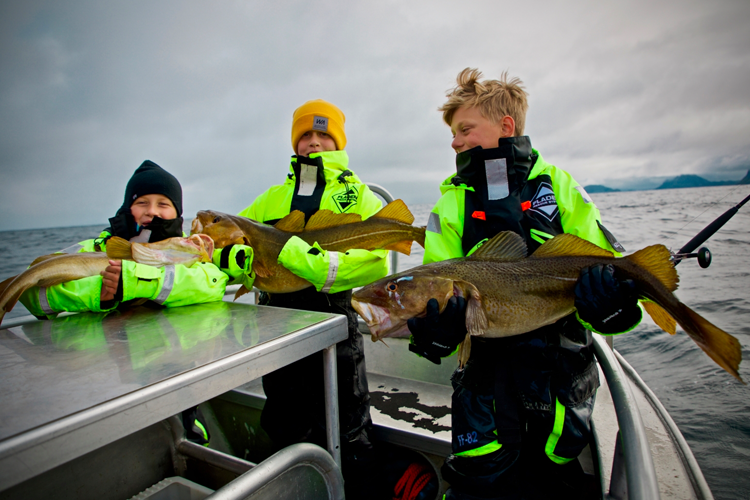 This week on Nappstraumen saw some larger groups of families take to the waters in hopes of catching some of the monsters that live in Norway, and its safe to say that even with the challenging weather there was lots of great fish being landed which resulted in lots of happy customers down in Nappstraumen!

The past week has offered both storms with tough fishing, but also great weather with really nice fishing results. This week we have had Swedes, Estonians, Dutch and some day guides with Norwegian guests. The past week has started with slightly more challenging weather conditions, but unlike the previous week, it was then possible to get out among the peaks on the outside of the Lofoten.

The outside of the Lofoten is simply magical, between the top pairs where there are fat Cod there is great Coalfish, and under the big Coalfish down on the fine sandy bottoms there are stable stocks of Halibut that are not completely shy about literally throwing themselves over the jigs during the drifts.

The fishing on Friday went well for all the boats at the camp, Calle who steered the guide boat with some regulars from Belgium got really nice Cod with several upwards of 15 kilos, a whole bunch of nice wins. They also got a bunch of bonus Halibut with the largest of 110cm a really nice food fish that was cooked later in the evening.

I guided two boats with a Swedish family and we also had really nice fishing, The day started well with double hookups after triple hookups on Cod and Coalfish. After a few hours it was some of the younger abilities that got tired and that there was more and more wind so we decided to change some people in the boats and that one boat would go into the camp while the boat I steered would wear a little to after a few slightly larger Cod.

After a while of searching, we could finally see a whole bunch of nice echoes along a slope from 30 meters down to 70 meters. I go up to the top and start the drift and it did not take more than a second before there were two rods with a really good bend in the boat, the first Cod that comes up was about 12 kilos and the second about 15kg, a really good start to the drift , the fishing continues really well and after a bunch of nice Cod we also decided to steer the boat towards the harbor.

Saturday again offered real bad weather and most boat teams therefore decided to do some excursions on land instead, it is something that is so nice with light lofoten, Bergen is always close and summit trips or visits to chalk white beaches are never far away .
Sunday promised better weather but once in place at sea the waves went really hard, we could still wear out all day and once in port we could see a mixed result, some nice wins, a bunch of Cod, a bunch of Pollack and a absolutely magical summer Cod of almost 20 kilos for the guests in the guide boat that was steered by Calle.

Monday was the day when the weather finally showed itself from its best side, on the north side of Lofoten we could be met by a sea that lay like a mirror and the fishing craving was like never before with the guests, The day starts nicely with a lot of Cod and Coalfish for the guests and over time, most of them switched to fishing for the Halibut that lurk in the gutters inside the peaks. The fishing for Halibut was unfortunately really tough that day with few contacts, but after a while of wear and tear, at least all the boats had Halibut in the boat with a top 120cm for our Estonian guests.

I steered the boat again with the Swedish family and after trying for the Halibut , we decided to go out to a really steep peak out in deeper water in search of coarser fish, said and done so we could start the drift with some nice carpet Cod and when we then stepped out on a small neck at a depth of about 75 meters, there was suddenly a rock hard blow followed by furious rolls in the rod, I Daniel who spent my previous years on Vesterålen immediately recognized the action in the rod that it was a slightly larger Ling and quite rightly they began to spot Ling for a while under the boat! A bunch of nice Ling were caught that day with peaks a bit over ten kilos with a maximum of about 15 kilos, Fishing for Ling is crazy fun and if you find them they are not so picky with what they eat…

The last fishing day offered really nice fishing, I drove the guide boat in the hope of filling some boxes with Cod and after a while searching could find the Cod during a large fishing hour at just under 20 meters deep! We baited with dead Coalfish which were sunk under the shoal and taken by some fine Cod , great fun in shallow water and especially with an average of about 10 kilos. After filling the boxes with Cod, we also decided to try for some Halibut before the day came to an end. I chose to put the operation on a small platform and just before we were to change the operation, it hit hard on one of the guests’ rods and the fight was on, after a relatively calm fight I was able to secure a really nice Halibut for our Belgian guests of 156cm cm, After a bunch of pictures and unhooking of the fish, it was of course released into the open again!

Now we are charging for a new week and new opportunities!
Tight Lines //
Daniel Freland and Calle Hjelm.