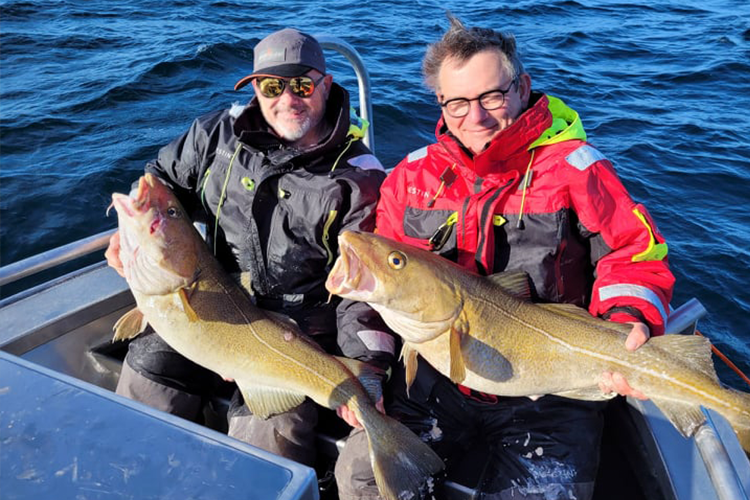 Despite another week facing some unpredictable weather of changeable, our latest group of customers at Å on the Lofoten Islands enjoyed a fantastic week of mixed fishing, including some of the best Coalfish fishing action we have ever seen out in Norway.

So the new guests arrive and settle in, 1st day we decided to go north side and get into some Cod, the swell was running and with a big tide, unfortunately, 3 people were seasick and I spent most of the day running people back and fore to harbour, but numerous Cod were caught and 3 Halibut around the 1m size ,

Day 2 was a lovely day, still a small swell but able to get to good Halibut area for the whole day , again many Halibut caught to 110 cm and some cracking Cod up to 30lb .

Day 3 offered brilliant weather 1st part of the day and managed to find a good school of mackerel for bait and then set off to the stream. In the first drift, 4 boats moved together and within 10 minutes both my boat and guide boat were into double hookups, 4 Halibut around the 1m again, then as the day progressed, we had more Halibut taken in better sizes coming up, with Steve having a 107cm  and then the biggest came to Danny at 164cm . Many more takes were had through the day including  Danny with what was thought to be bigger than his last but unfortunately lost.

Day4 was a bad weather day so fishing was cancelled for most of the day, so a little sightseeing up to the town of Reinne . Late afternoon the wind changed direction and outside the camp calmed down enough so all off to go to try and find some fish local with just a few Coalie caught but we got out.

On day 5 the sea was flat and we headed to the stream after collecting more baitfish, I’ve got to say not much fishing had been done the last 2 weeks using the regular shads. Again as before within 10 minutes of the 1st draft there were double hookups on the other boat and then 2 hookups with me on the 1st drift, what a day this is going to be were the thoughts going through my mind. All of these fish were around the 1m measures.  Then a few drifts later Steve hooks into a good fish and hands the rod over to his partner Cheryl to give her the chance to fight a fish , and what a fight it was coming up and running back down on several occasions,  Cheryl put up great innings and as the colour of the fish came into view I could see this was a big fish , I estimate 150-160cm and I say estimate because unfortunately on the final turns of the reel the braid snapped as the fish made a desperate run back down . After this the fishing slowed to nothing been caught for a long period of time, so I said final drift guys and then what happened next was to be an experience of a lifetime, some fish started to show on the sounder so I grabbed my light rod with 150g sandeel and chucked it in , couple of turns and a Cod appeared,  then Steve followed my suit and boated another, more fish were showing on screen and then I could see the birds working 100m away so into gear and over we head. The sea was alive with krill and Coalies so casting into swarm of fish with the sandeels and sinking them all the way through them the big girls were underneath and the next 2hrs was the most amazing fishing I’ve experienced in 12 years out here , fish from 10lb to 44lb going Steve,  I radio over to the other boat to come and join us and we fished side by side with bigger and bigger fish and lots of screaming and laughter of pure joy .

Day 6 started really slow with occasional fish coming up on the other boat , but we were struggling and especially after the night before the mood was a little down as it is also the last day , so after many drifts in the stream we made the decision to go over closer to land in an area I fished before back In 2019 and had 7 fish in one drift, this was the best idea as within 10 minutes the 1st halibut came up 115cm and as I’m unhooking it on the deck John’s rod screams off , another 1m and then Cheryl asking me why is my rod bending , another fish hooked and landed for her at 116cm , a message comes over the radio the other boat is into a good fish,  then John again hooks in again this time 85cm , the other boat gets a 130cm on board for Andrew,  what a mental final half-hour fishing on the last day .In total 2 boats landed 34 halibut and quite a few lost , with some decent Cod and the Coalie experience of a lifetime, what an amazing week, patience and dedication pays off, well down to all guests.

What a week it’s been! If this report has got your creative juices flowing when it comes to picking a destination for your next Sea fishing Holiday, we do still have some weeks available for the 2022 season at A. If you would like to join us at the famous Lofoten Islands destination call us on 01603 407596 or email us info@sportquestholidays.com.