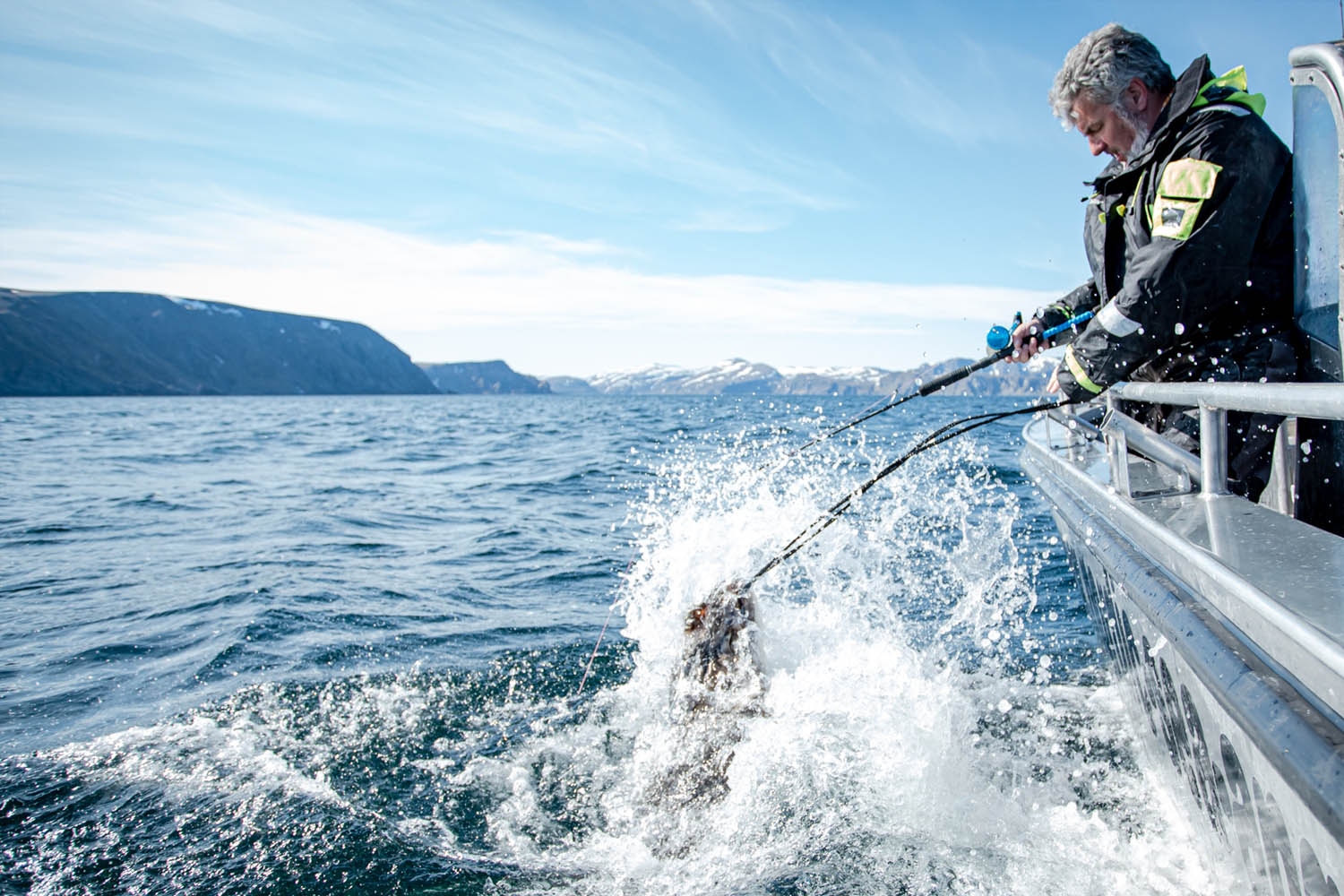 As previously mentioned in the news here from Havöysund, we had an absolutely fantastic start to the week with many nice fish, including the absolutely fantastic Halibut of 205 centimeters. As I said, we had the feeling that this was not the last thing we had seen of the Halibut this week, and we were right! Sunday was spent in the immediate area as it blew hard most of this day and some managed to poke up a couple of smaller Halibut but most gave up fairly quickly as it was too hard to fish.

Instead we had a brutally Monday, the weather was unbelievable and many of the boats fished for Cod on the northern edges with good results in terms of the amount of fish, but the big Cod still shine with their absence and the top fishers belly lie at 12-15 kilos which of course is a super nice fish but there are much bigger ones. I, Rickard and Stig from Maxel Jigstar were out fishing side by side with the Guide boat, but the Halibut fishing was very slow this day and we were looking for some new spots for the year that we have a feeling for and that we hoped had started to deliver. There we were wrong and we only came in contact with a couple of fish, one of which was a slightly larger fish in the Guide boat which Stefan unfortunately lost and in my boat we had a bunch of fish up, but however, we got rounded off by this day with a nice fish of 122 centimeters.

During our last day of the week, Andreas and I had planned to get away a little further when the weather would allow this, big Halibut was the goal and for the guys in the guide boat, it was still Magnus who was waiting for his first Halibut for the week, and as previously said, the boys had a really cruel week in the guide boat where everyone except Magnus had caught fish over 143 centimeters up to 160! So this day was all in and the last chance. The remaining boats at the camp did not want to go far and were content to fish in the vicinity of Havöysund, which resulted in many nice fish but boat 3 pulled in a really nice fish when they had gone in Halibut for Halibut and then pounded a huge fish at 158 ​​centimeters. Once on the long trip, both Andreas and I understood quite quickly that we only had the first tide to fish on as it was much more messy on the lake over there than promised, and when the current would turn in the afternoon, it had not been drivable home, so we had to fish efficiently and do our best to take advantage of the hot period we had to go on, and oh we did… Mattias in the guide boat who had previously pulled the nice Halibut of 143cm the other day and a bunch of smaller fish, lent out his faithful halibandit with curly tail to Magnus as he had one in the Midnight Glow color, they fished for a while and the current was really good. Magnus needed all the confidence in the stuff he could get and after playing around with the jig for a while, he FINALLY got that cut he had been dreaming of for several years and waited hard for the whole week!

Stig and I dragged up on another spit that I wanted to test and had an incredible feeling, the big ones would just lie there and wait for us, and yes you can probably say that it was so… on the third drift we drove out with our bait fish over the hotspot and then it tears away, he lets it suck in the Coalfish properly before he pulls up the brake and cranks the hook! The fish had gone a bit and made a rush further away from us, but stopped pretty fast and at first we could not help but see that it was a good fish, but how big it really was we had no idea until it came in right under the boat and the real weight of the fish was visible. It was then when Stig after a while had to turn the fish and started to lift it from the bottom we realized what piece it was he had hooked in and Stig was overwhelmed by the incredible weight of the fish, he did a good job of keeping the head up on the fish, which is incredibly important to prevent the fish from going down again.

Eventually it started to get closer and when Stig got in the last gear, it was enough to tear it to the surface and to easily land the incredible fish on the first try! It was then that we realized that it could actually be two meters, when it was then tailed and we unfolded the entire ruler, we realized that it was actually there, absolutely incredible 2 meters long. After many nice photos the nice fish got to swim back and even then the day was not done and Stig’s big dream was fulfilled, but it did not stop there… After an empty drive after that, I put up the last drive before we would leave the area and move back to other places due to the conditions. Then almost immediately a nice fish comes up on the sonar after my baitfish which unfortunately did not want to bite, shortly after that we had drifted up to a peak and then another echo comes in under my baitfish which I immediately see to be off size larger! However, this fish was serious and devoured my bait immediately and offered me a first rush! It fought brutally all the way up and I started to wonder how big the fish actually was as there was good weight in the stuff.

Then it was time for us to move back before the wind would come, we decided to fish a new place for this year which I have a really good feeling for, and which I know holds big fish. Arriving after half an hour, we send down the baitfish and it did not even take 30 seconds on the first drift before another nice fish comes in under my bait, it takes my bait and unfortunately when I have to set the hook, it loosens… I still keep the weight and feel that the baitfish is still hanging, so I start coaxing and fishing with the rig in the hope of the fish coming back, and after a while of coaxing, it slams on again and there was no talk anymore, I hooked it and got me another completely brutal fight which was one of the more fun I had. This one also landed nicely and I could measure it to 152 centimeters,

This put an end to the week and everyone at the camp has been super happy with both weather and fishing, we are super excited and thank everyone for a great week we will never forget.