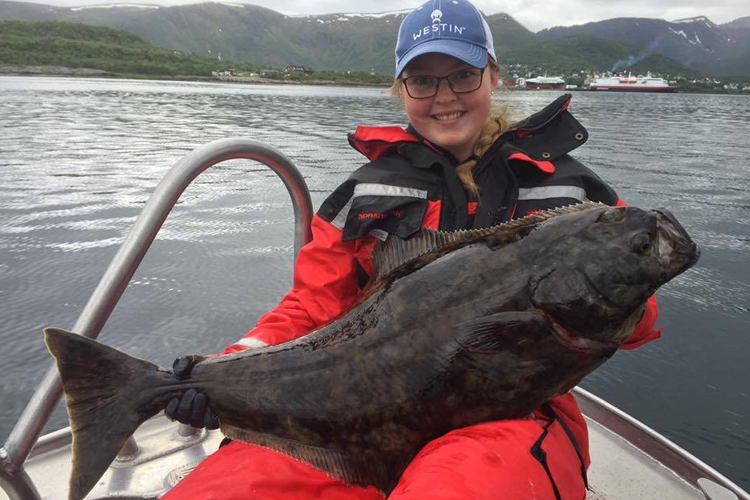 With the very exciting news from last Friday regarding the Norway Borders will be open from the 15th July for UK anglers, we thought a fish-filled report would get you even more excited, especially if you are due to head out to Norway.

This report is from Nordic Sea Anglings Havoysund destination where the Halibut fishing has been off the charts, not just for numbers of fish but the size of them. It seems to have a rest in the fishing has had a very positive affect. Here is their report week ending 9th July:

Then this week also ended here in Havöysund and I wave good bye to the guys at the airport yesterday. None of them really wanted to go home but everyone was pretty tired in the body after a week with many fishing hours and many big fish!

During Monday’s news report, as they said, they were out and about, Stian who landed the PB at 144cm and just a little while later the new PB at 146 centimetres was the biggest that day and afterwards, they got some food fish for the evening. Wednesday held some wind in the morning and the guys took a few extra hours in bed when I had big plans for the last day, 14:00 we would go off on one last drive in search of big Halibut and stay out at sea for 24 hours. The forecast for the night to Wednesday was really nice with 0 m / s of wind so there was no wind when we headed off to the fishing spot. When we started fishing, the wind would be at an end and we looked forward to the evening when the wind would settle, but when we arrived the weather was already really nice from the start and we were all super happy, and it would just get better.

After picking some baitfish we put up our first drift next to a spot I have good confidence in and caught big fish in the past, it took no more than five minutes before Steffen, after putting the rod in the holder to check a thing on the phone and he barely turns around before a really nice Halibut totally smacked his jig and steamed away in a brutal run! The fish was holding the bottom for a while and Steffen thought it was really good weight in the rod, so we were prepared that this could be Steffens first 50+ fish! It was very heavy all the way up to the boat and when it came up we saw that the fish had swallowed the whole jig. The landing went perfectly and after a little surgery we got the jig out and stinger so we could take a few quick pictures and see Steffens new PB Halibut at 146 centimetres kick off with full force again. While we were unhooking Steffens fish at the boat’s edge, the other boat yelled that they were hooked in a fish too which turned out to be another nice Halibut of 141 centimetres for Daniel! a totally magical first drift of the day and we were really looking forward to what would happen next.

We drove on and waited for the tide to turnaround when we finally started getting good drifts in the other direction a couple of hours later Steffen landed a Halibut of 125 cm and shortly thereafter after Krokar Andreas in a really good fish of 135 centimetres. During the night the fishing was quite slow for a number of hours, but as the morning approached and we fished the next rising tide in another place, the boys in the other boat were really hot and both Ted and Andreas managed to knock up another 140+ in a short time! totally magical fishing. This was a great way to end the week for the guys and during the morning of the last day everyone started to feel pretty good so we decided to go home and thank the halibut gods for a fantastic fishing week in paradise Havösyund!

Just to sum up a little quickly how it went for the guys during the week I can say that everyone in the gang landed fish over 140 centimetres and a cruel top fish for the week to Daniel at 170 centimetres, however, many more fine fish were caught …

I thank the guests for a super nice week and great work! Now I have a week without guests up here so fixing everything up to 100% will be for the next bunch in a week!

Douglas, you have got some job up there!! All the anglers here in the UK are super pleased with the recent news and we have our first customers arriving around the 23rd July so let’s hope this great fishing continues and we will start to see some reports coming in from some UK anglers.