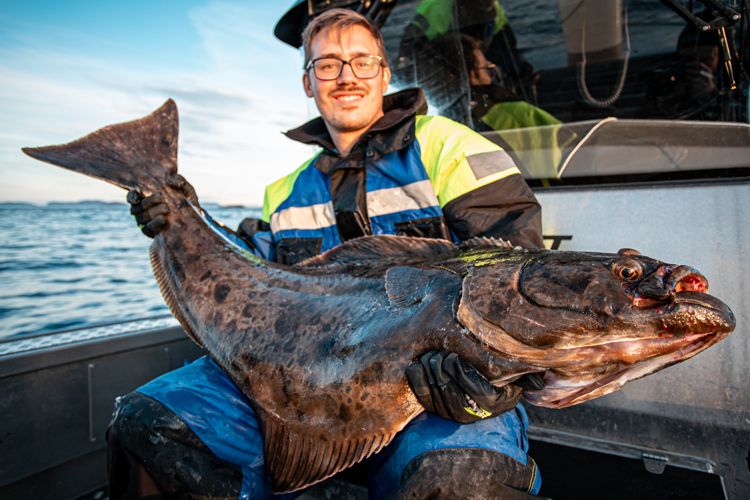 Over the past week in Havoysund, the weather has improved greatly, and the fishing has been fantastic, with an abundance of nice Halibut and Cod falling to all the boats and visiting rods.

This week here in Havoysund has been fantastic, both at sea and at the camp. After a couple of rough days at the start of the week, the weather has improved significantly, and we’ve enjoyed some quality fishing.

With the start of the week reasonably rough and with strong winds from the south, we couldn’t venture too far offshore and stayed close to the camp. The first day offered modest results, although Christoffer managed a Halibut of 108cm. The second day we fished in the same area, and it was a little more productive; the anglers in boat seven landed a lovely fish of 149cm.

By Saturday, the winds had calmed, and we could finally venture further offshore. We started the day with some Cod fishing, landing a bunch of excellent food sized fish, before switching our attention to Halibut. Despite the wind still blowing, it felt hot, and I was confident we would get amongst some fish; I even said to the boys that we’d land a fish of 180cm!

On the second drift on the Halibut mark, I set the boat to run along the edge of a shelf; within a few moments, my bait got slammed, and I was hooked into what felt like a really good fish. I passed the rod over to Christoffer, whose face was a picture when he felt the weight and first burst of power from the angry Halibut on the line. He did an excellent job of playing the fish, and after a crazy battle, we measured and secured a stunning fish of 185cm. After a few quick photos, the fish was released back to its watery home. The other boats who’d ventured to a slightly different area had also had a productive day, landing lots of nice fish.

On Sunday, many of the boats ventured to the area we’d fished the previous day, and it didn’t take long before we were back amongst the fish. Christoffer in the guide boat landed a nice one of 140cm, and there were a few other decent-sized fish that landed throughout the day – not quite in the same numbers as the previous day, but it was good fun. Unfortunately, the wind picked up in the afternoon and cut our session a little short.

Monday was party weather! The sun was shining, and the sea was calm and flat like a mirror. We found a nice shallow area around 7-10 metres deep and landed many excellent food-sized fish. Boat 5 also managed a better one of 130cm.

After lunch, with the bigger fish harder to come by, we moved to a slightly different area in the hope of finding a giant! After a couple of drifts without incident, Christoffer hooked into a small Lumb, around 3kg. What we didn’t realise was it was being followed to the surface by a colossal Halibut. As soon as I saw the fish, I dropped a jig in front of its nose, but it was only interested in the Lump. Christoffer released his fish, only to watch it get engulfed by the huge Halibut, which swallowed it in one and charged back down to the depths. I followed it back down to the bottom on the Sonar and realised it made a beeline straight for my Coalfish dead bait before hammering it in a matter of seconds. I quickly set the circle hook and passed the rod to Roland, who started battling with this true monster of the deep. After seeing Roland’s shocked face, a mixture of horror and joy, we were all laughing in the boat as he felt the true power of what he’d hooked!

Roland played the fish like a king, and after a great fight, a cracking fish of 182cm was by the side of the boat. After a few nice pictures, the fish was unhooked and released; it was magical watching it swim back to the bottom in the clear water and glorious sunshine.

On the last day of the week, we were blessed with stunning weather, with more sunshine and light winds. Throughout the day, the fish were scattered across all the boats, and everyone managed a few. Boat five landed one of 135cm and 125cm; the guide boat added a fish of 130cm and 147cm and boat 9 one of 140cm – it was a lovely day on the water.

We’d like to thank all the guests for a fantastic week, and already we’re excited for the coming week – with more good weather on the way, expectations are high!