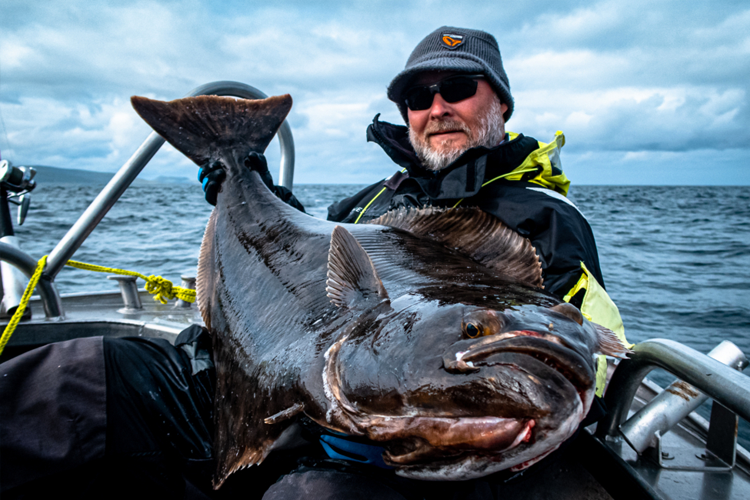 Its always great to see even in the difficult weather, the guides over in Havoysund still work hard to make sure the guests can have the time of their lives out on the water catching big fish!

In between the storms in Havöysund

We have completed a very windy week here in Havöysund, the camp has been completely full which is really fun considering that it is a very long time since we had so many wonderful guests up here at one at the same time. Unfortunately, it has been blowing a thousand mph the whole week, one moment 20 m / s and the moment later, constant westerly wind. This has limited us in where we could fish, but fortunately, we are in Havöysund and there are almost always areas to fish in as long as we think it is safe to go out.

The Cod fishing is still completely bananas up here, we have not pulled up any giants yet but there are extreme numbers of Cod out on the edges. We often find Halibut out on the Cod marks, so bonus Halibut often come up and you just have to pray that it connects in the deep water when the current pulls on. The thing is that we could only be out on the edges for a couple of times during the week, however, it has been enough to fill up with the desired amount of carpet Cod in the boxes to be able to spend the remaining windy moments on targeted Halibut fishing in shelter behind the islands on shallower the water.

When the weather finally allowed us to get away on some real fishing, it was the night before Saturday and we set out at 00:00 to hunt the beloved Halibut. For a start on the low tide current, it was sluggish in the area we were in, but after a couple of hours of fishing, Oliver in the Guide boat finally hooked on the pass’s first Halibut , it was good to get started with the nice fish that measured 106 centimeters but it would not it would be a long time before Oliver was up and running again with something heavier. When the rising water started to flow on, we were on a really nice stream edge and when we approached the drip, Oliver burned in another fish that immediately showed its weight, however, the fish did not resist and Oliver wondered what I was talking about when I said it was a “better” fish because it did not pull away… But the first main shake indicated it and when it broke the surface, Oliver was pleasantly surprised when he got to see his new nice PB of 135 centimeters! Some who succeeded nicely this evening were also boat 10 which pounded two cannon firers of 136 and 140 centimeters.

In the coming days, fishing was a bit occasional but usually in the vicinity of the camp as it was very windy, we had to cancel the fishing on a couple of occasions, but on Sunday the wind calmed down to at least 10-12 m / s so we could actually get away and fish well. I had the honour of steering the boat for the old men in Boat 4 who were still waiting to fight with our flat friends. The goal was only Halibut and we came out in the morning in good timing. After a couple of short moves to find the right drift, things started to kick off. One good Halibut after another came into the sonar and looked at our baits but did not want to strike, it started to feel really good and that it was only a matter of time until we would bend the rods. Very true, a fish with really good speed finally came up from the bottom towards Peter’s baitfish, and before I even opened his mouth about what had happened, Peter stood with a well-bent rod in his fist and a screaming roller! The adrenaline in the boat flared up and the long wait for the boys was finally worth it. The fish fought on all the way to the end and was measured at a nice 123 centimeters, which set a nice PB bar for Peter for the next trip. Jonas had not intended to let Peter be the only one with a bend in the rod, so after the drift Jonas also managed to hook in a fish of 85 centimetres, and since the boys are not cowards for some good sashimi, this was an excellent fish to lick up at home in the cottage and enjoy with some soy and wasabi. We jumped on to the next area when the current started to turn and finally we found the fish once again, after drifting out on a nice 40 meter flat, Fredrik hooks into a fish rock hard and rods bow, but shortly afterwards the hook pull for an inexplicable reason, what does not happen often but unfortunately happens, the grief over the lost fish would be short-lived as the minute after Jonas gets stuck in a fish that is hooked well. It was absolutely fantastic to see Jonas fight and get to pose with this fish which measured in at 129 centimetres and set a new PB for Jonas. Jonas was hot as an iron stove this day and later he hooks again on a fish of good calibre, Magnus who was in the boat made his first trip and Jonas wanted nothing better than to see his friend fight for the first time in his life with one of these absolutely amazing fish. So he passes over the rod to Magnus and we all get to enjoy the most amazing sight in the world, a fishing crazy man who gets to experience the power of a Halibut. Magnus was probably a little taken by the moment and we were all really happy when we then throw this fish in Magnus’ lap and immortalize the moment with some nice pictures. The joy was total in the boat and the flounder fever flowed between the boys, by far the best there is and what I want everyone to experience!

The last day of the week was unfortunately completely blown away with strong winds and a lot of rain, all guests fought well all week and got to see with their own eyes how it can be out there when it’s good!

Now we charge the batteries for a new week with full throttle and lots of fish! Fortunately, it looks like the winds are not going to sabotage too much for us and after the weekend it looks really nice so we keep our fingers crossed for a long trip!