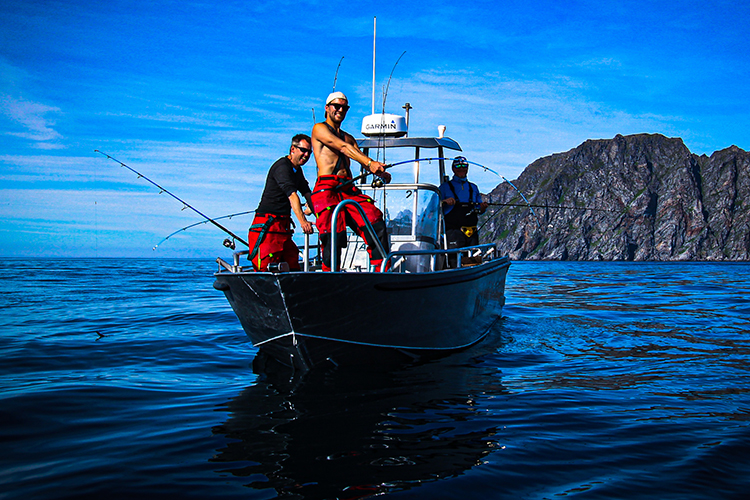 Anybody travelling to Havoysund in northern Norway with us either this year or 2021 needs to read this report just sent to us from Nordic Sea Angling Guide Douglas. The fishing is off the scale at the moment especially the Halibut fishing with triple and even quadruple hookups occurring on a regular basis. I will hand you over to Douglas for his weekly round-up:

Yes, then another fantastic summer week was in full swing here in Havöysund, the temperatures are over 20 degrees every day, nice wind conditions every day and fishing of absolute world class! We have a little more groups at the camp this week than before and it is very fun to have Swedes, English, Lithuanians and Danes at the camp. At the start of the week we had a really nice first day with no wind, so I took all the boats on a long trip the first day with the goal of starting the week with a real jump start, and yes it was!

We went on a pure Halibut pass and I had said that we should be able to expect a good number of Halibut. Already on the first spot it started immediately and on the first drift Roland and Terry landed in the guide boat a really nice double bite on 127 and 129 centimeters, yepp first drive for the trip so the atmosphere in the boat after this was really good. All boats managed to pull a bunch of fish during the morning and we had good fishing all the time, but until the afternoon we took a move and when we started fishing on the new spot, it broke loose in earnest. Immediately when we dropped down we get a triple bite in the guide boat, which is a bit busy on three men in the boat, 30-40 meters next to us we have boat number 2 which at the same time they also smack a triple bite, all fish are landed and fast put back. No monsters from those fish, but immediately after that the Danes in boat 2 pull another triple cut on the same drive, and after that they pull ONE QUADRUPLE CUT, on the same drive! The fishing was so on fire so it is not really possible to describe. But all boats had really good fishing during the day and we could sum up a very large number of fish of between 140-150 centimetres and that was where the top fish were, just under 150 centimetres.

During the weekend we did some mixed fishing for cod and some haddock with rather mixed results. The Danes in boats 2 and 8 have had a really good Halibut fishing in the vicinity of the camp and spin fishing in shallow water has been the method, and then delivered a lot of fish with a nice top of 150 centimetres, really good fun on light gear. Today, however, we had planned a couple of boats to fish Redfish, and I can promise that it was not just nice Redfish that came up from the depths this day…

Once in place, nice Redfish of 2-3 kilos took at regular intervals, the fishing was stable and after a while the Danes in boat 6 got a really nice fish of 4.5 kilos. Terry got a really good surprise when he lies 20 meters above the bottom at 260 meters, then something hits him properly on his rod and then it just starts to spray the line out of the reel, yes there was no major doubt that he had hooked on to a Halibut and after hard work, we salvaged his fine fish of around 115-120 centimetres, really cool and exciting when you do not know what you have caught. After a few hours of fishing, boat 8 yells at me and says that they hooked something really heavy for 30 minutes, but that in that camp they still had what they thought was a really big Halibut, somewhere down at 200 meters when it kept taking line. They wanted assistance and after playing the fish for about 45 minutes, they finally got it up to the boat. I jumped over and helped them land the magical dream Halibut that had been up and down 300 meters several times! and we measured it to a fantastic 187 centimeters!

It is definitely one of the roughest I have ever seen and the joy in the boat that arose when it was secured was something completely extra. The fish swam strongly back after some really cool pictures and we are now looking forward to the next 2 days which will hopefully end the week on top!

Well, Douglas what can we say apart from wish we were there to be part of this amazing fishing you guys are experiencing. For all of you due to head out there in the next few weeks, we think you are going to be in for a treat.