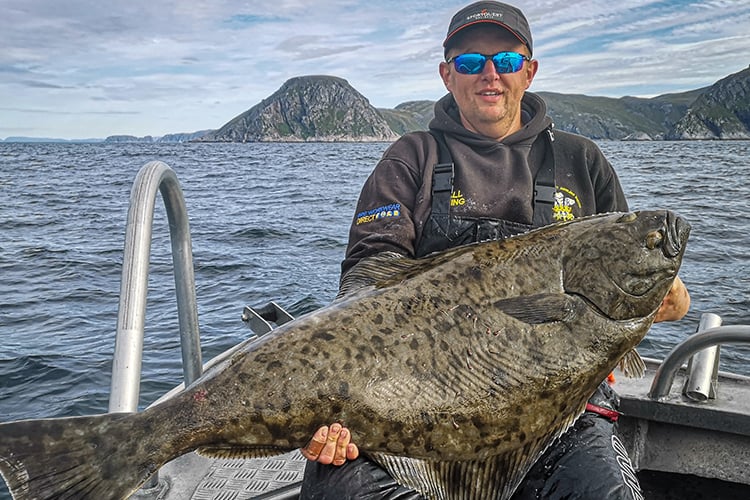 Just to finish off our fully hosted 2 weeks at Havoysund, here is Douglas’s report from the last couple of days fishing. Douglas is the onsite guide who works for Nordic Sea Angling and drives our other boat. I will now pass you over to Douglas’s report:

Unfortunately, as I said, we had really tough weather last week, but the last two days again offered fishing, however, on Tuesday it rained extremely hard and the wind was also harder than promised. But despite this, everyone at the camp fought properly as it was insignificant with the rain. Ross and the guys in his boat, however, were really eager to drive a few hours of plaice fishing, they went to the area which was really rewarding the week before and it did not take long before Will pounded up this year’s largest Plaice here at the NSA at a nice 3.29 kilo! a really fantastic fish and extremely important fish in our waters, after some quick pictures in the pouring rain, it got its freedom again.

During the last day of the week, it was finally time for nice weather conditions and we left the port at 04:00 in the morning to make the most of the day. We started fishing in a few bays which during the autumn are usually really good and I was at least tagged to finally fish there, but unfortunately, the fishing was not super good in the shallow water which I think was due to the extreme rain the previous 3 days so the water was very cloudy and it poured fresh water from the mountains into the bays. So after 4 hours of fishing, we pulled 15 smaller fish between us two boats, we made a drastic move down to an area that I knew would hold extreme amounts of flounder. Yes, everyone was tagged and two more boats joined that had not stuck out with us so early in the morning. Once at the new place, we then had the absolute sickest mass fishing I have ever been with and if you wanted, you got triple and quad bites more or less every drift but it usually results in total chaos so you had to hurry to wind up all rods when you had a double blow, however, sometimes you got tangled. In Ross’s boat, they got to experience their first five strokes! and yes it is completely insane to tease five Halibut at the same time in the boat when you are only four people!?. Yes, we got a lot of fish and many fish measured nice 120-130 and sometimes 140 centimetres. In Ross’ boat, they really went in for the incredibly fun and efficient spin fishing

Now a new week is underway here in Havöysund and the three boats with Norwegians at the camp have fished well the first days with over 10 flounder landed just outside Havöysund and a top fish of 146 centimetres and Terje in boat 4 missed a real big fish… After a really tough south wind yesterday, it is today flat calm sea and the boys are down in a nice area where I think they will have brilliant fishing all day so stay tuned for the next news!

Thanks Douglas for your report of the last couple of days on our hosted week. Hope you enjoyed our customers.

If you would like to join one of our fully hosted trips we can put your name down, simply call us on 01603 407596, we can talk through the trip details and make your dreams come true.