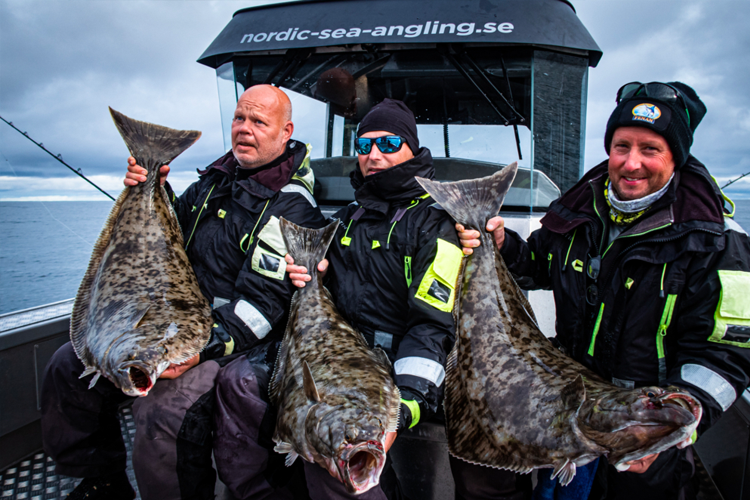 When it comes to having amazing weeks on the water, nothing we have ever posted from Havoysund has come close to this… This week we saw PB’s all round, NSA records beaten with over 120 fish being landed and released in just 10 hours of fishing. Wow.

NSA record, large Halibut and cod topped with a Monkfish

A completely magical week was over here in Havöysund, the weather gods have been really kind to us and that in turn has made us have a smooth magical fishing experience. In the spirit of the usual Havöysund, we all went out to sea the same evening the guests arrived at the camp, the sea was like a mirror and to get started we went out to catch a couple of Halibut immediately! The gang in the guide boat were roughly tagged when they visited us here for the first time, the plan was to be back until midnight, however, the flounder would turn out to visit us very quickly…
After setting up the first drift in the bay we would fish and have a quick chat with the guys about technology and expensive, so we dropped our jigs and baitfish. To see what works best, I made a flapper on Rogers mackerel, and it was not a completely bad idea as after just a few minutes into the drift, it starts to pull , Roger tightened the line and held on, but the fish dropped the mackerel and got off. I made a new flapper for Roger, after putting the boat on a new line down through the bay again, Roger got another chance and this time it was hooked! Roger’s reel started screaming, and after a really cruel fight in the 20 meter deep water, we landed the first Halibut of 126 centimeters, Roger and the rest of the gang were really happy and half confused about how “easy” it was.

On Friday I was out guiding Fredrik and his two boys Victor and Vincent who are 9 years old. They have previously been with us when we had our camp on Risöysundet, but now they were here to broaden the views and hopefully catch lots of large Halibut. Together with a bunch of other boats at the camp, we went down to a very sheltered place from the north / east wind, here we tried spin fishing and regular jig fishing and drifted completely from within land at 10 meters down the edge to 50. The first fish came at about 40 meters and after I hooked the first Halibut, Vincent and Victor had to stand and pry in the rod to feel it, it was not a monster on the hook but a suitable eating fish that pulled good, unfortunately in his last rush just below the boat, the hook loses its grip…

Not much happened in the drift after when we slipped out at 30 meters, until Fredrik’s rod that stands in the rod holder bends with a baitfish on, he throws himself over rods and hooks the fish, and on the go I get hold of the spinning rod he is holding, when I then have to crank up his jig it slams into it too and bang we had a nice double bite. Vincent and Victor were once again allowed to indulge in the stuff, and Fredrik just enjoyed being able to stand side by side with his two sons and play the Halibut! Fredrik’s nice fish was 121 centimeters and the boys’ 94 cm. After a while we decided together with the guide boat to move a long way to another bay where we had good hopes of landing something bigger fish. Already the first drive there I stand and push my 300g Sandy into a shallow tongue and when the jig dripped down over the edge, it went BANG, I had hooked into a better fish.

After a little organization in the boat with rods so Victor and Vincent could start playing the fish, the fish fought really well but so did the boys and with tender arms the boys got the fish up to the surface and I could land a beast of 146 centimeters. It was really the icing on the cake this day to see the boys standing and toiling with this fish that was bigger than them!

During Thursday’s Cod fishing we had really good action, we caught huge amounts of large Cod up to 15 kilos under the baitfish shoal out on the edges, the sickest thing this day was that Frank and the gang in boat 9 landed a Monkfish of smaller caliber, but really cool and the fish was enjoyed in the cabin in the evening. To be able to eat your own captured monkfish is great.

On Saturday when I was out with the guide boat, we went out and fished for big Cod after a little Halibut fishing in the morning. We were in a different place this time, but the match was the same, fish under the baitfish, so the Cod came and visited. It was not as good action as last time, but I knew this place held bigger fish. Very true, Crille hooks in a really fat Cod that took the line, but unfortunately, it came loose after a while, Crille lowered to the bottom again, and as soon as he came down, he hooked in another monster Cod! Luckily this did not come loose, and the Cod weighed 20 kilos and was 128 centimeters long, a real monster!

Sunday offered better weather and at 04:00 we went on a long trip to be part of some incredible flounder fishing. Frank and Mikkel in boat 9 were with me there last year and that day broke all the records we ever had, however this day would be so much sicker, I could never have believed what happened… The fishing was on fire immediately and all the boats on the camp was with us, it only took a little while before we had a quadruple bite in the guide boat, the fourth unfortunately got off but we landed the other 3, the Danes in boat 9 who are really sharp on the spin fishing had triple after triple hookups until the four in that boat also had quad takes. The fish that came up were one at 130 centimeters and the other, even bigger than that, in the middle of the bonanza in boat 9, Henrik pulled the Halibut of his life at 160 centimeters, followed by Mikkel who knocked up a fine 155cm. By 10:00, boat 9 had landed and released 39 Halibut, and the fishing continued at this pace and in fact even sicker until they ran home at 17:00. We managed a really sick NSA record with the most Halibut landed in a boat in one day, which I also think will NEVER be beaten, and that every single one of those Halibut was released back and even hooked into the water surface to be so gentle as possible is worth mentioning.

The last day I was down in an area with the guide boat that our Norwegian guests at the camp had good fishing on earlier this week with a peak of 165 centimeters, it is shallow fishing and when you have the chance to go fishing for 150+cm fish at 10 meters deep, then it’s really really exciting. In the first bay, boat 9 pulled a 132cm and a smaller one of 90, in the guide boat we had a larger fish that Morten, unfortunately, lost after a while, and we landed one of 120 and 82cm. After that we moved and I stopped to test a really small nice pocket along a steep rock wall. Immediately when we let down, Dennis hooked in a really nice fish which unfortunately made the line snap… at the same time as it happened, Morten missed another on his baitfish, but it did not do much for a couple of minutes later he hooked another and this time the fish set off in a BRUTAL rush right out at 60 meters! Morten had to fight like just that and the fish fought well, after the magic fight we finally saw the fish and I was able to land a monster of 164 centimeters and Morten’s new steady PB. While we were photographing Morten, boat 9 was right next to us and pulled a 150 centimeter! What a honey hole we found, Morten who was floating in the water in my drysuit could magically see his awesome fish swim home again and it had to put an end to an absolutely huge week with very big fish and good weather!

Now we reload, sharpen the hooks and tie up for another week in the halibut kingdom of Havøysund!
Tight Lines // Douglas Dahlberg & Andreas Hugsén