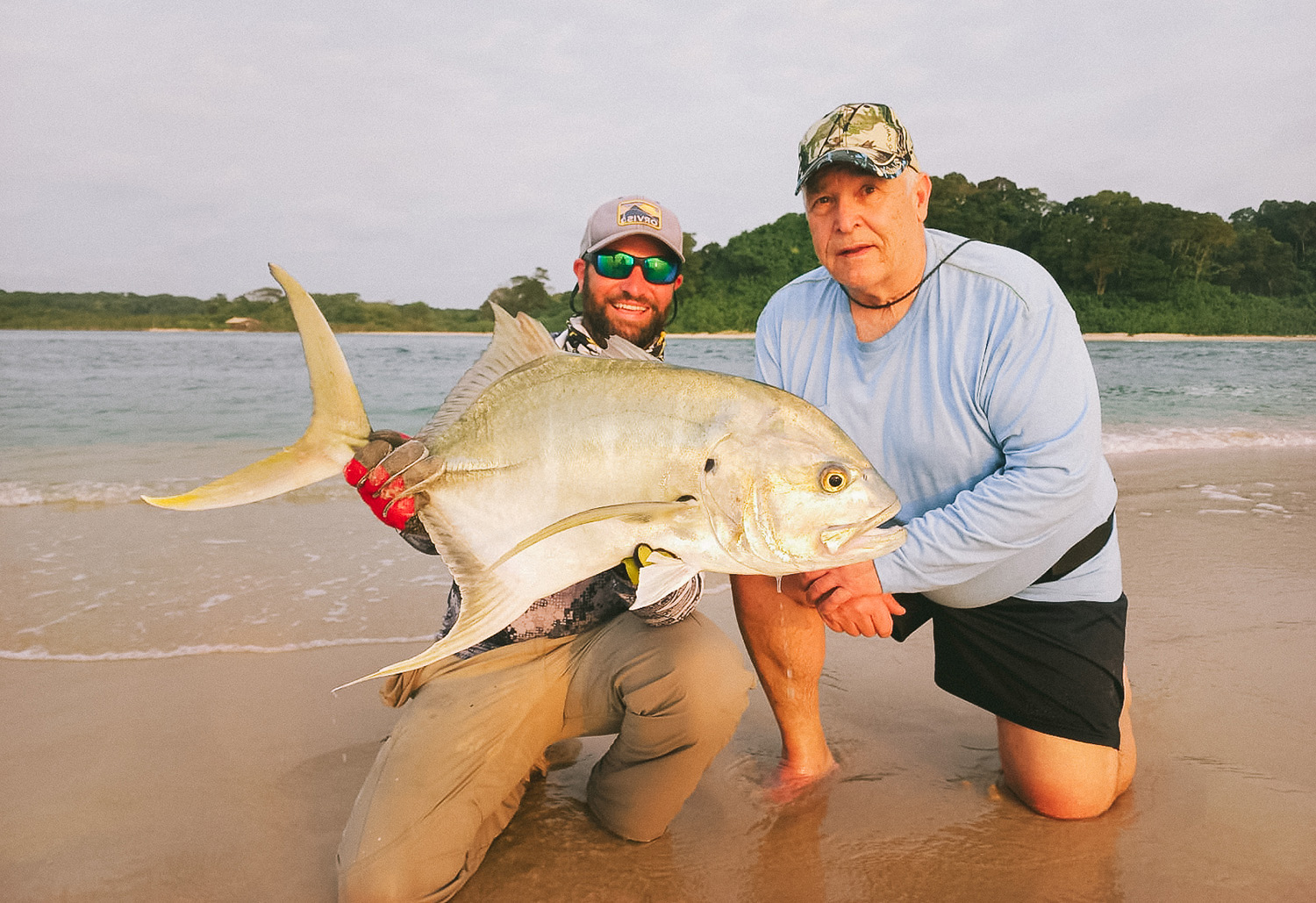 The 27th of January 2022 will remain one of the most special days of my life. Just like our two clients, Rick from the USA and the strong Ukrainian Yuri, it was the first time I had laid eyes on Setta Cama Gabon. The rainforest, the amount of water everywhere and pure wilderness were breathtaking.

After a quick introduction to life around camp and a hearty lunch, it was time to join my senior guides, Ewan and Teddy, on my first Gabon guiding expedition. The boat ride to the mouth is something that actually takes several boat trips to truly sink in, there are just so many sights and sounds to absorb. Seeing forest elephants lounging in the water less than 30m away is pretty unique. If the journey up to this point was extraordinary, the first time you get to the mouth and adjacent surf is nothing but overpowering. It is a big, complex system and is beyond textbook for big, angry fish. It would become quickly evident that textbook is in fact the case, the abundance of predators is unlike anything I had seen before. The shoals of marauding Jacks got the clients and myself excited, but when we started to see massive silver creatures entering the estuary we couldn’t control our nervousness. Your first rolling tarpon will be a memory etched into you for life.

Due to the lack of rain for over a month, the water was very clear by Gabon standards and although there were literally fish everywhere, they proved difficult to tempt on a lure. Rick and Yuri both landed nice cubera & brown Snappers, the ever-present barracuda and longfin jacks the first few days fishing the mouth but the true monster still evaded us.

Luckily Setta Cama has a backup for when the mouth is fishing slow. The morning “light tackle” estuary spinning sessions proved to be a major hit and in its own right a world-class fishery in itself. Every morning produced good numbers of fish, mainly comprised of Jack’s along with some surprisingly nice snappers. Nothing quite like hearing massive chases, scanning 360° and seeing a maelstrom of white explosions travelling towards you. It’s easy to get lost in a catching frenzy. Two other highlights of the estuary sessions were seeing a troop of chimpanzees and even a gorilla along the edge of the forest!

Yuri and Rick saved the best for last. The surf started to heat up the last two nights of their trip. Yuri landed a massive sandshark of over 80kg while Rick hooked a similar size class sandy on a paddletail which unfortunately broke off. The bigger Jacks along with new species like the senegalese kob and Giant Threadfin started to make an appearance. Several massive fish were unfortunately lost which we suspect were monster cubera’s and proper giant jacks. Some of these lost fish were the result of being taxed by zambezi/bull sharks, in Gabon you need to keep an eye out for the dangerous game on land and even scarier game in the water!

Yuri finally decided to end the trip on a high note. He jumped a tarpon in the surf and on his next throw went tight again and stayed tight. Fighting a tarpon in the waves must be one of the ultimate shore-based angling experiences. After a few quick photos, Yuri’s 55kg tarpon was safely released.

Yuri and Rick were blown away by the whole experience and have already secured their spot for next season. Unlike them, I still have 3 months left to be amazed by this beautiful place. It truly is Africa’s last wild Eden. The heavy rains have just started and the new group of clients are on their way. There is a feeling in the air that I’m about to get blown away all over again.

If you’d like to know more about the fish, fishing, and accommodation at Sette Cama in Gabon, you can contact our destination manager Paul Stevens on 01603 407 596 or email at paul@sportquestholidays.com, who would love to speak to you.