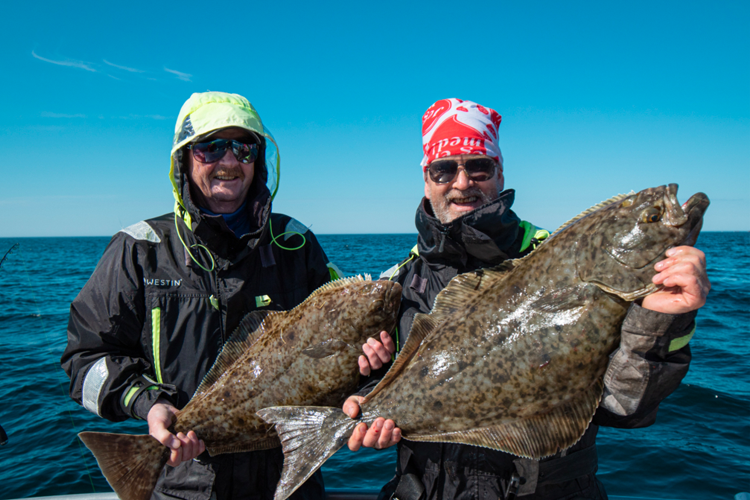 Its fantastic to see a big group back at A again, it feels like its been so long since there has been a proper group hitting the water! This week also produced something we have NEVER seen before!

Two monsters on the same hook?!

It’s a new week on Å, and we have got 27 men from Eastern Norway up to visit. The vast majority have been here several times, but we also have several first-time travellers who have really experienced some amazing fishing the first two days! When the guests arrived at the camp on Thursday night, there was a good buzz around the camp, so several boats decided to leave already after the information meeting. Last week, as I said, we had a visit from Eirik and Morten in the Guide boat, and I have not had time to write about their last three fishing days until now. But the fishing has been at its peak the last few days again, and although some boats have had a bit of a hard time luring the Halibut, a lot of nice Halibut, Coalfish and Cod have come up for us!

Last week in the guide boat, we decided to try some new places, as we had had some excellent fishing not too far from the camp. We drove north on Monday, with Halibut as the goal of the day, and preferably some nice Cod. When we came to the north side, there was a lot of old waves, and it was quite hard to stand fishing in it. But we should still get fish! We drift on a very fine sandbank with a depth of about 50 meters. It was not long before the echo sounder filled up, and the Cod had invaded the Halibut territory. It hit on both Eirik and Morten. It was a really nice Cod, around 10 kilos, but Morten pulled the biggest of the day and got a nice Cod of 18 kilos! In the same drift, something slams my bait and I immediately feel that it is a big Halibut and pass the rod on to Morten. But it all felt bizarre, and it is perhaps so strange when we finally see what is at the other end. There are two Halibut! A pair of meter-long fish have miraculously managed to hook on the same circle hook! It really is the strangest thing I have experienced, and it should actually be almost impossible. But after a good laugh and some pictures, we release both fish. The fishing is slow throughout the day, so we move closer to the camp, where it turned out to be more active, and Eirik and Morten got more fish of 85-100 cm.

The next few days, we gave the big Halibut a try, but it wasn’t easy. We got several nice Halibut at eating size the next few days, and then we fished with much larger bait than what you usually do. The fishing was insane last week, and the boys caught several Halibut every single day! The monster did not appear this trip, but it is not long before the giants pull into Å. We ended the last day with some Coalfish fishing, where we got some nice fish landed in the 10-12 kilo class, even though these were not quite monsters. Thank you for a delightful week, Eirik and Morten.

Already the first evening with new guests at the camp, several of the boat teams left. The weather was great, we were ready to take full advantage of it! Several boats had good fishing throughout the night, and Torgeier & co in boat 1 had a great session for Halibut the first night. Several nice fish around 90 cm, and a nice top fish of about 120 cm. The Coalfish was also active the first evening / night, and several boats got very nice Coalfish around 10+ Kilos. Unfortunately, the surface activity has not started properly yet, so we are waiting for it to be a bit cloudy so they are less weary. There was also Cod around the big Coalfish, and several fine Cod around 10 kilos were caught this evening as well!

On Friday I was going out with the gang in boat 9. Rickard and Arnfinn are up here for the first time, and were really looking forward to experiencing what the sea off Å had to offer. They had never fished for Halibut before either, so this was completely new to them. We drive out at 10 o’clock to fish with the current. When we arrived at the first fishing spot, it could not have taken more than 2 minutes before Arnfinn’s rod was bent. Arnfinn pumps the fish nicely and carefully, and the others in the boat crank up to prevent the lines from going into each other. But when most people are halfway up, I see a huge echo on the echo sounder, and ask them to stop. Tore, who is standing in the back of the boat, drops down a few meters, before it clings to the floor! He does not have time to counterattack before the line squirts out of the reel! Double hookup! I walk forward in the bow, and can lift in Arnfinn’s very first Halibut, which we measured to 79 cm! Tore hangs over the boat, and the fish has not yet stopped rushing out. But when the fish stops the outburst, it shakes its head, and the hook falls out. We would have liked to have seen this fish. Little happens in the next 2 hours, and we make a move further out on the bank that has delivered well with fish the last few days. Here it did not take long before Terje has solid fish too! A very nice fish of 87 cm comes up, and it seems like the fish is ready for the chopping block!

We had several contacts, but there were no solid fish left in this place. So we drove on. The current had finally turned, and it turned out to deliver! Because as soon as we get down, Rickard’s hooks his very first Halibut! We land the Halibut, and measure it to 89 cm! I was going to take some pictures of Rickard and let the boat run. Tore had noticed that something was missing on his bait, and waited a bit to wind up. And then it hits Tore too. Almost a hook up again! This Halibut was a few cm below the minimum size, but it became a father-in-law-son-in-law picture! Only a few seconds later it bends in Rickard’s rod again! This time it was bigger! The fish rushed away, and now the Halibut really wanted to dance! Rickard won maybe 10 meters with the line, before it wanted to go down again. And so it went on for a while until the fish got tired. Now it came up slowly but surely, and after a hard fight, I was able to secure the Halibut with the Halibut hook. There was a great atmosphere in the boat, and I could lift in today’s biggest fish of 118 cm! This was Rickard’s very first trip up here, and already the first day he has pulled two very nice Halibut! We have several contacts and land a couple of 90 cm fish at the end of the day before we return to camp.

In boat 3, they were going to fish for bait, when it started to boil around the boat. A little later they hooked a very nice halibut which they estimated around 140 cm, which ran away after a slip by the boat. Unfortunately, they did not land this, but they are here… The fishing is still great, but the tide has really determined it. The rising tide has clearly delivered the best in recent days, and several boats went out last night to fish on the ladder. It will be fascinating to see how it went for everyone last night when they return to land. I’m going out again tonight with the gang in boat 3 who have been out most of the night on Coalfish fishing. The weather looks even more promising in the coming days, and we cross our fingers that the fishing lasts!