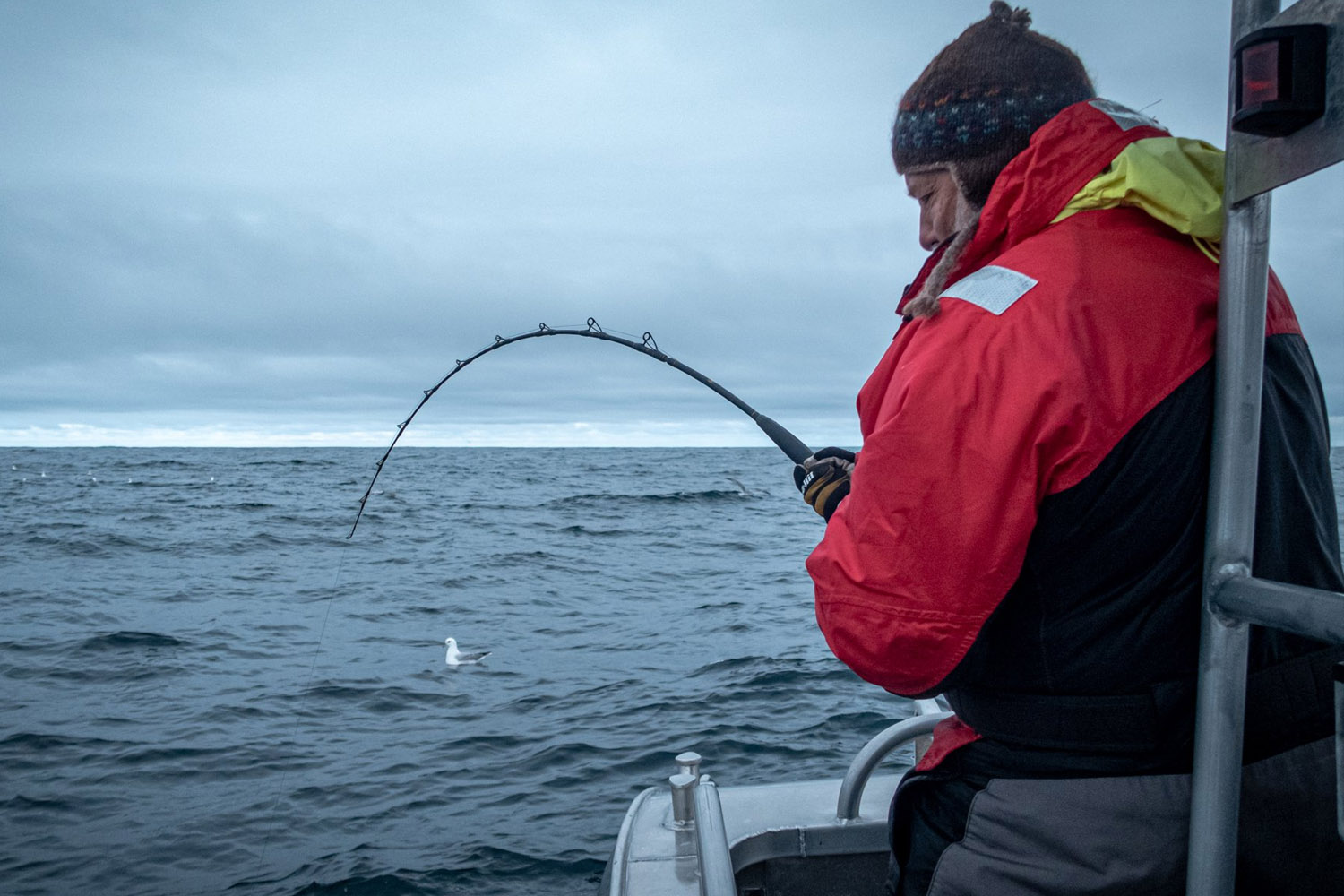 Finally, finally, finally, the wind and the storm released their grip on Vesterålen and the weather forecast showed good weather. Already on Tuesday, a group of new guests arrived who would fish with me (Erik). We are investing in Halibut in the immediate area with fresh memories of previous fishing sessions. However, the fish were not really in the mood but showed the most interest by following the baits on the sonar and gently nip in the tail of the jigs.

Towards the afternoon, however, Philip suddenly yells “Here it is!! “. I don’t understand anything but look out over the boat side and just see a giant Halibut at the boat side. I yell for Philip to drop his jig, as I assumed he cranked up and the Flounder curiously followed all the way up but he only replies “It’s down there”. Thus, the large halibut which is estimated to be around 2 meters has completely swam up to the boat side to inspect the boat. Shortly after it, dives and we crank up a jig as quickly as possible to lure it to bite. When the jig is shimmed a few meters down, it reappears and is only centimetres behind the jig, all the way up to just below the engine where it folds off. We put some drifts in the same area but unfortunately do not see the fish. Now what an experience!

On Wednesday we make a short pass on the west side and land a bunch of Cod and a couple of big Coalies over 10kg before we finish early to charge for the long trip. New guests arrive in the evening and we run a walkthrough so everyone is ready. Thursday’s weather forecast was absolutely perfect, with weak winds, small waves and just an old murmur out at sea.

In the morning, the sun gassed warmly over a mirror-shiny fjord when we started up 6 Suzuki engines and headed together towards the V-Mountain. The drive out went fine, the old humming reminded itself but nothing stopped our progress and we could easily lie in a steady 20 knots on the way out. Once we arrived, we spread out and started fishing around the basic peaks and the large stems with grazing fish. Our arrival was almost identical to the turn of the tide and it took an hour before the fishing broke loose.

First out was boat 5 with Sören & Co who reported a fantastic Cod of over 24 kg and a couple around 18-19 kg before the radio started to go hot for real. Douglas, who was a little further north, cheered on the radio that they had an unparalleled Cod fishing session and the other boats quickly joined the site. Already, Douglas’s guests had pulled another Cod over 20 kg and more around 15-18 kg and it did not take long before the rest of us had solid rod bends. The Cod were by far most interested in the jigs and Crazy Daisys with paddle tails dominated the vast majority of boats. The Cod pressed deep, near the bottom and undoubtedly the most effective method was to dunk the jigs towards the bottom and then lift slowly.
The crazy fishing continues and Håkon’s boat reports in a 130 cm long Cod that also weighed the wave over 20 kg and the amount of fish between 10-18 kg, we quickly lost count.

In the middle of the bite period, we landed three Cod of exactly 110 cm each, in three different boats. In Daniel’s boat, he suddenly got a bite on a jig in the open water that was cranking up, the bite marks show a hefty Halibut and shortly after that, a medium-sized cod is attacked in the open water. The rod bends oppositely heavy but unfortunately straightens out quickly. The Halibut had pulled the Cod off the hook and returned to the depths. Maybe the same fish, maybe two different? Who knows…

Towards the afternoon, two boats choose to make an attempt on a large drift and head to the position we call the long edge. The first bites are from a couple of coarse Cod before it literally takes a cross stop for Håkon when he cranks the circle hook. The big rolls in the rod gossip about a Ling and when it breaks the surface they burst over the radio “What a big Ling, this easily weighs 30 lbs! “. The fish was in top condition, weighed a wave over 30 kg in the harbor, and was to be the end of a formidable long trip to the fantastic V-Mountain.