Many people ask, what are the best flies for fly fishing in Iceland? You could ask 20 Icelandic fishing guides, and you will get different answers from all of them. However, there will always be flies that they all recommend. I have therefore made a list of the essentials below detailing what you would use these for.

You will find flies both wet, dry and bait patterns for all species.

Nymphs and emergers make a huge amount of the brown trout’s and Arctic chars diet up in the Highlands. The most prevalent of those being Chironomidae´s, or non-biting midges, and Bitmý (Simulium Vitatum), mayfly species as well as several species of Caddis and freshwater snails (pulmonata). For lake, pond and small stream fishing patterns that imitate the Lepidurus Arcticus (Arctic Tadpole shrimp) can be very effective. 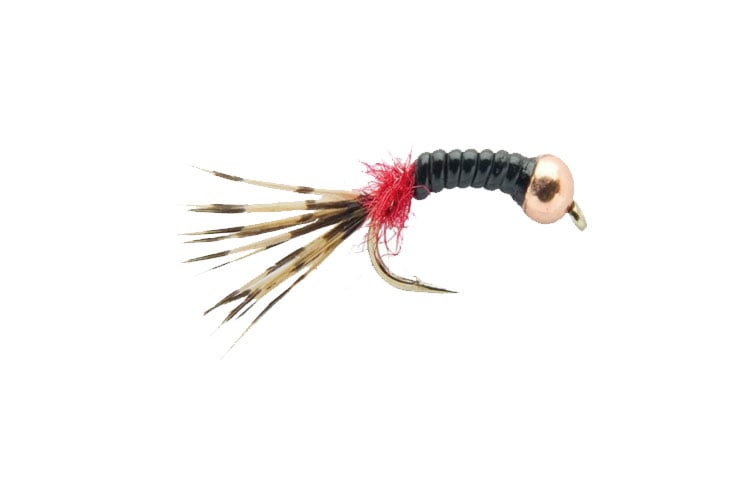 Krókurinn is one of the most prolific flies in Iceland. It emulates several aquatic insects most notably a hatching Chironomidae. This fly is usually tied on a size 12-18 hook and was created by noted fly tier Gylfi Kristjánsson. 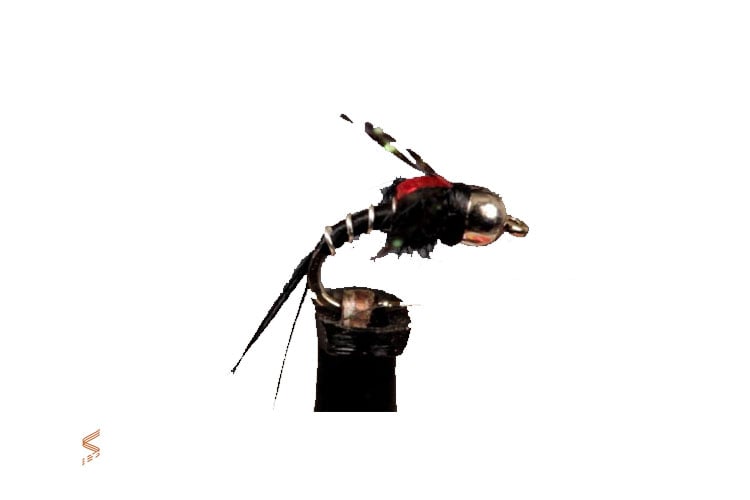 Higa´s SOS is a fly we love. This fly was designed by our good friend and Utah based guide Spencer Higa as a Baetis (mayfly) imitator. Typical sizes are 16-20 but people have had success with this fly from size 10 all the way down to size 24. 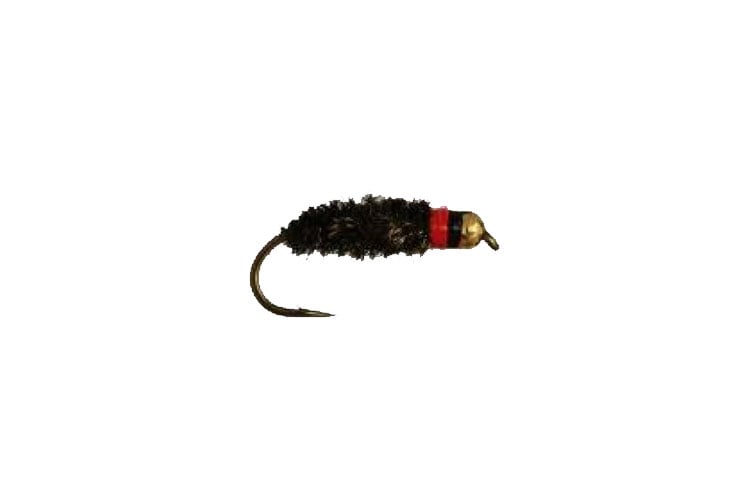 The Peacock is one of the more simpler flies you can tie but doesn’t mean it isn’t effective. Usually tied one a size 8-16 hook it can be tied in many different ways, without a bead head, weighted or un-weighted and with or without a tail. 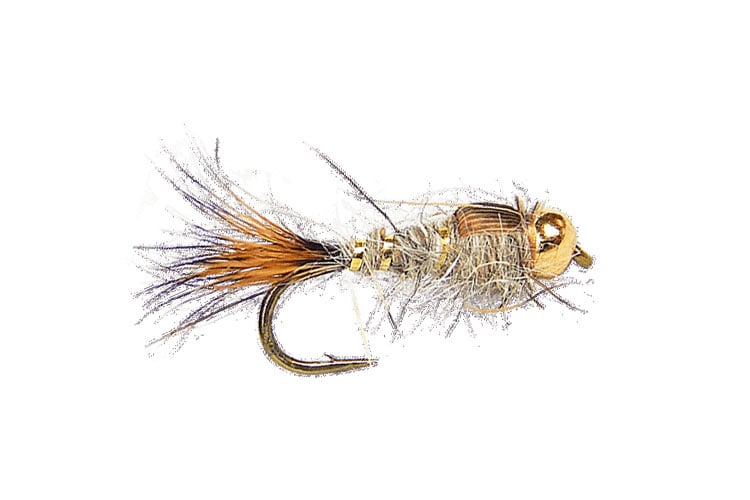 The Hare´s Ear nymph (with or without a bead) along with the Pheasant Tail probably share the unofficial title of world most used nymphs and Iceland is no exception. This classic fly pattern works wonders in the highlands where It is an effective pattern throughout the year because it covers a broad spectrum of prey that is active in every season. 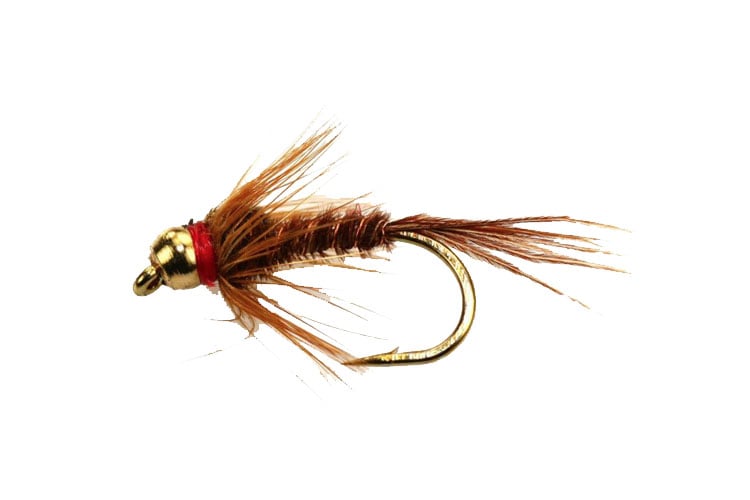 The Pheasant Tail nymph (with or without a bead) is trout fishermen stable around the world and Iceland’s no exception. The classic original Pheasant Tail pattern was designed by an English Riverkeeper named Frank Sawyer to imitate many nymph species. There are several varieties of the fly but they all seem to be on the menu for salmonids around the world! Sizes: 12, 14, 16, 18, 20 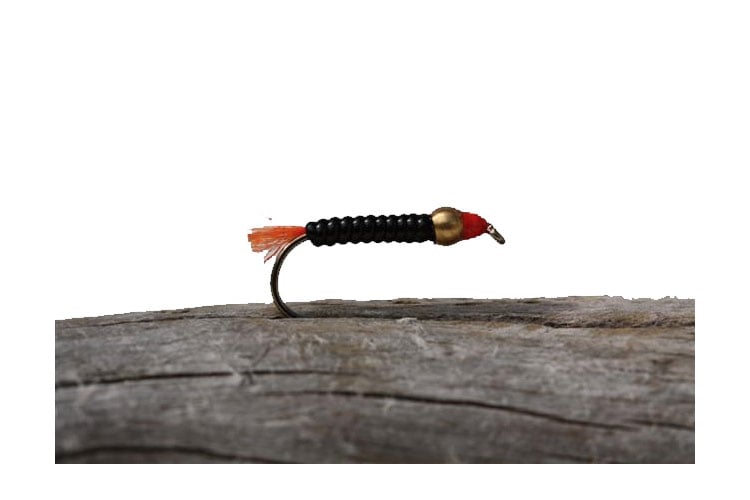 Alma Rún was designed by Icelandic fly tier Sigursteini Húbertssyni and named after his granddaughter. This fly was specifically designed to catch Arctic Char and that’s what she does best. Typically tied on size 10-18 hooks. 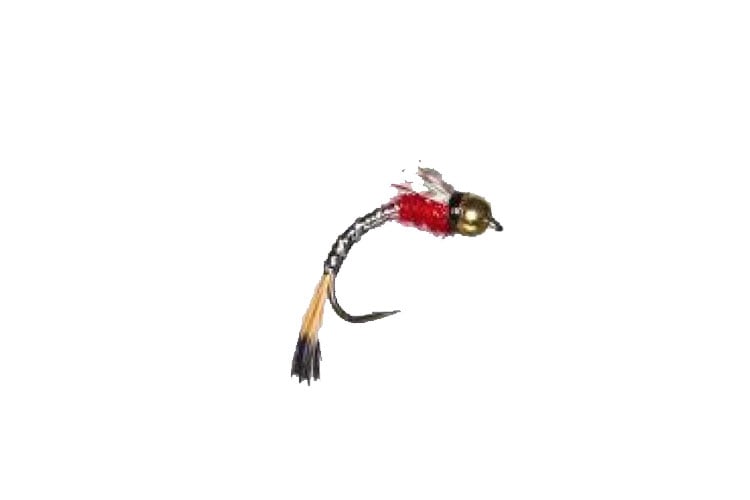 Peter Ross – Although originally a wet fly the Peter Ross has been adapted to a nymph and can be lethal at times. This flashy fly works great as an attractor pattern and has shown fantastic results especially when it comes to Char fishing. 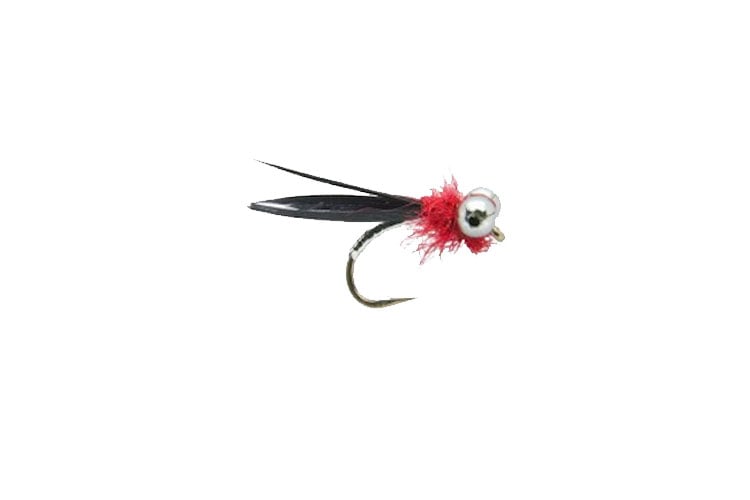 Mýsla – Another fly designed by noted fly tier Gylfi Kristjánsson. The dumbbell head and design of the fly means it is “upside down” in the water meaning you can skip along the bottom with less chance of getting caught up on rocks. The color combination is true and tested in Icelandic trout fishing, traditionally red, black and silver. Tied on size 8-18 hooks. 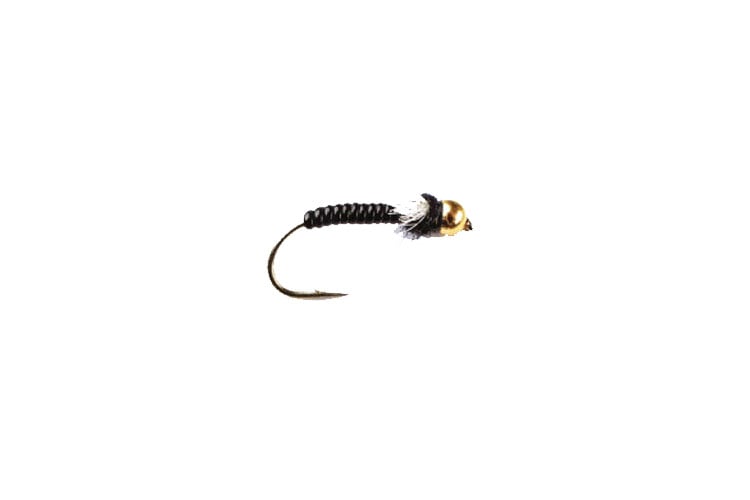 Mobutu – Several different flies varies come with this name, but they all have a black vinyl wrapped body and a beat head. Tied in a variety of sizes this versatile fly imitates a wide variety of aquatic insects.

Streamers: In Kaldakvísl and Tungnaá streamers can be effective all season. In Spring and fall though they are often our go-to flies. Especially on the upper section of the Kaldakvísl where large brown trout hang out in deep canyon pools. The most effective streamers vary greatly. Imitations of Sticklebacks, juvenile trout, and juvenile Arctic Char are always a safe bet. But flashy attractor patterns and something new and different is bound to get plenty of hits as well. These are few of our favourites but every year we find new streamers that are irresistible to the fish so don’t hesitate to try something different. 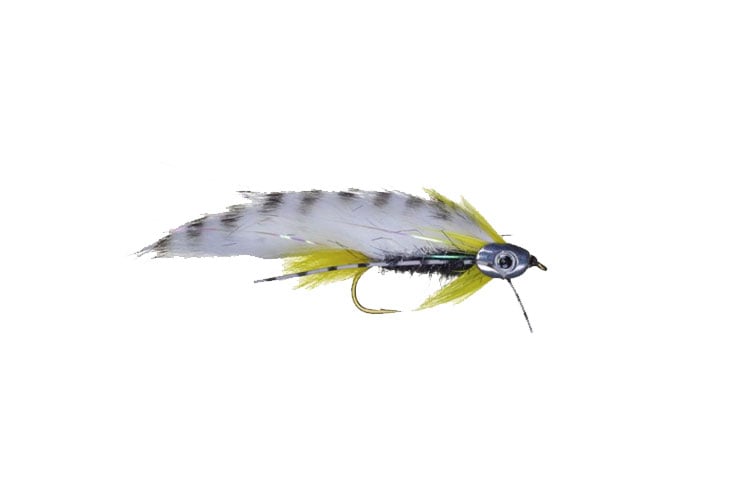 The Black Ghost/Black Ghost Zonker: Something about the black, white and yellow combination just makes this fly unstoppable. Tied in a variety of fashions, weighted, un-weighted, with a bead head, with a skull head etc. All variety have in common though that they are exceptionally productive flies. Look up any Icelandic trout fishing log book and you are sure to see the black ghost among the most productive flies, if not the most productive. Fishing this fly with a sink tip in the deep canyons of the upper Kaldakvisl is sure to results in some great memories. Other varieties of this fly like the Olive Ghost and Black Ghost sunburst have also been proven successful in Icelandic waters. Sizes #4-10 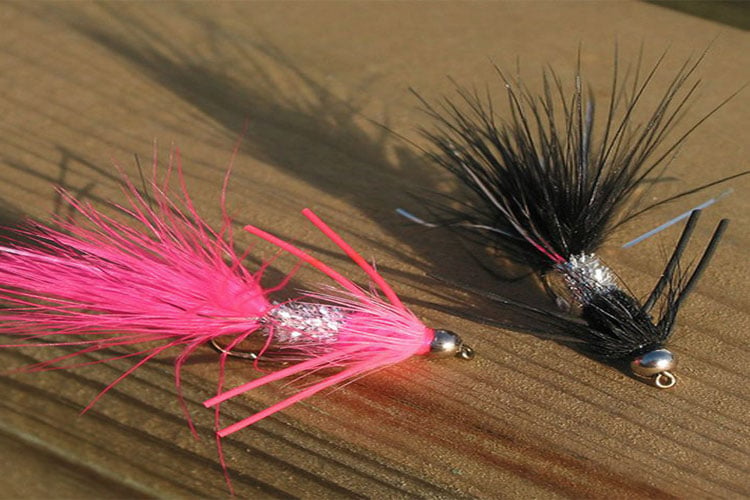 Dýrbítur (Animal Bitter): Is a pattern that comes in a variety of colours. The Black, Green and Brown version make excellent baitfish imitations whereas the hot Pink, Red, and Yellow make excellent attractor patterns. Surprisingly we often have the best results with the Hot Pink variety which for some reason the Arctic Char can go nuts for. The fly was designed by Sigurði Pálsyni to catch Sea-Trout, which it did as this fly caught a 23-pound Sea-trout in 2004. Since then this fly has become a stable for most fishermen in Iceland regardless of the target species. Sizes #4-8 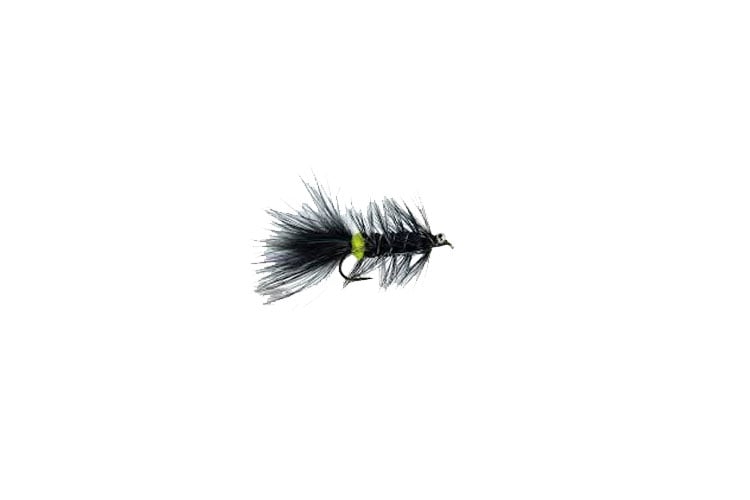 Nobbler: Like the Dýrbítur the Nobbler comes in a variety of sizes and colors. With Black or Olive being among the most popular. 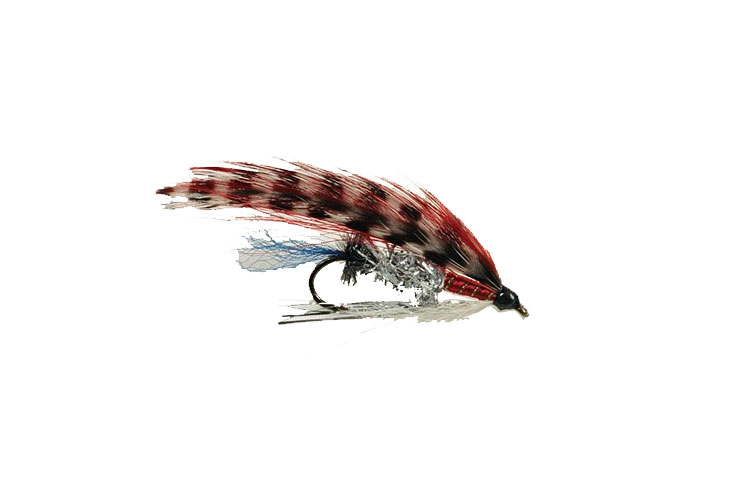 Flæðamús: Another gem designed by Sigurði Pálsyni the Flæðamús is an exceptionally well-designed fly that is always a good option to go to when the fish are proving elusive. 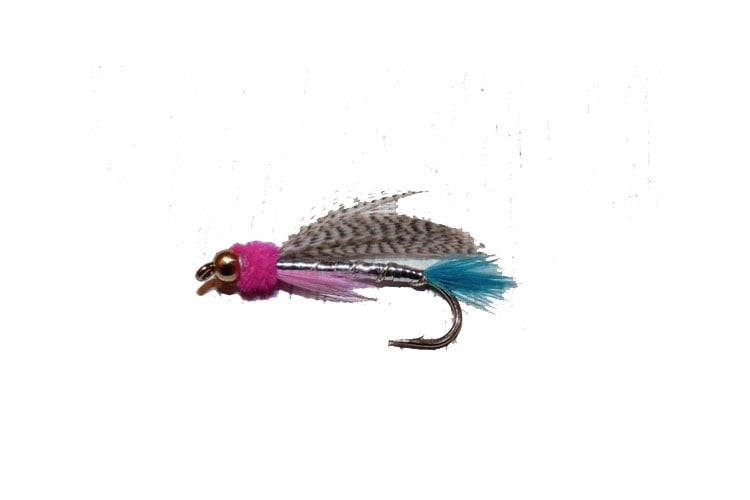 Bleik og Blá: I think its safe to say that this fly looks like little to nothing in nature. But yet for some reason, Arctic Char find it irresistible. This fly can be fished a variety of ways, stripped fast through a pool, swung through a rifle or even fished upstream like a nymph.

The main dry fly action tends to be Chironomidae´s and Caddis. All though there are also smaller hatches of other flies like Mayflies(that actually hatch in June/July in Iceland) and Crane flies(July/August usually). For the Chironomidae´s imitations getting the right size can be crucial. So although a size #14 might prove somewhat successful at times the smaller sizes from #18-24 are usually better. If you have a hard time tracking your tiny size #24 fly we recommend tying a larger pattern caddis in front and then a dropper to the Chironomidae pattern. 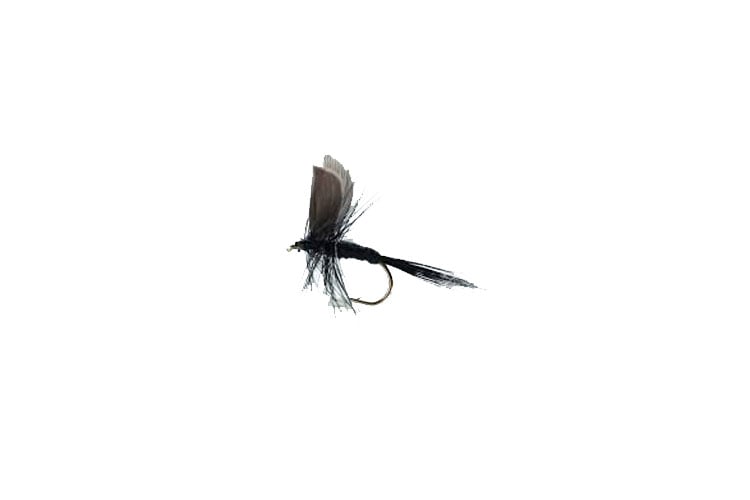 Black Gnat: A wonderful pattern for Chironomidae hatches if tied on a small hook. Size #16-24 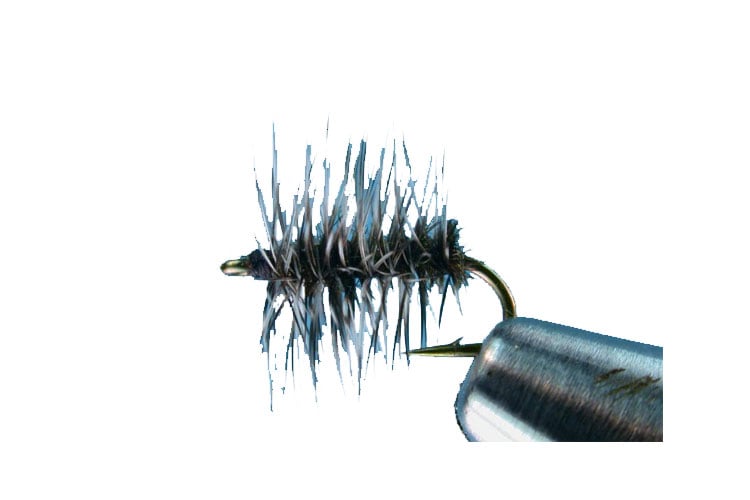 Griffiths Gnat: Does a wonderful job of imitating a cluster of Chironomidae and Midges. As well as if tied on a smaller hook a single Chironomidae/Midge. Used in a variety of hook sizes from #14-24. 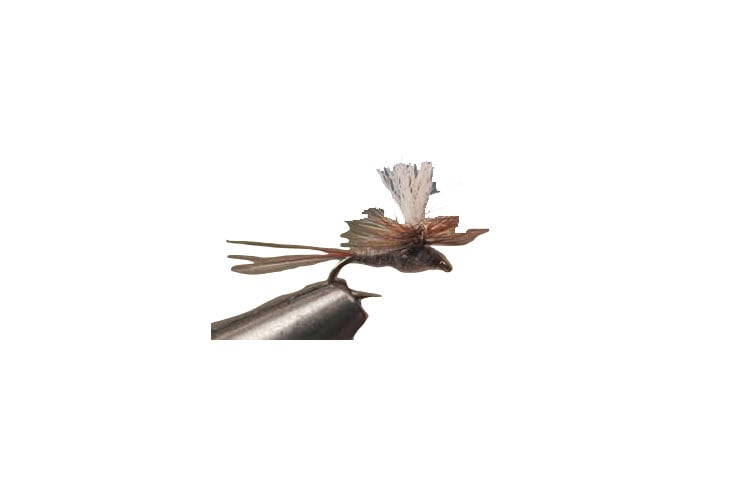 Parachute Adams: The Parachute Adams imitates an adult Mayfly, which means it imitates an awful lot of small flies. So even if our small Mayfly hatches mostly happen here in June/July. The Parachute is used all season imitating a wide range of smaller flies. Having a good range of sizes for this fly is a good idea and will leave you well equipped for a whole host of situations you might find on the water. 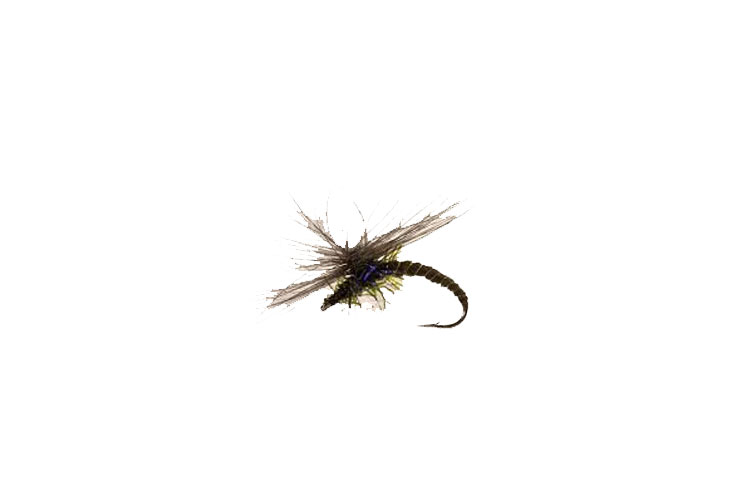 Klinkhammer: The Klinkhammer was designed as an emerging caddis but can also emulate Sedges and a host of other emerging nymphs. 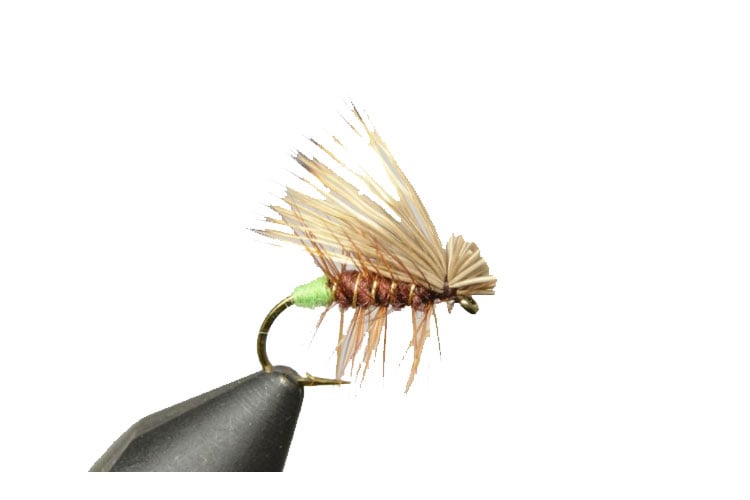 Elk Hair Caddis: Is an adult caddis or Small Stonefly pattern. First created by Pennsylvania fly tier Al Troth the Elks Hair has been a long time favorite in Iceland for anyone fishing a Caddis hatch. 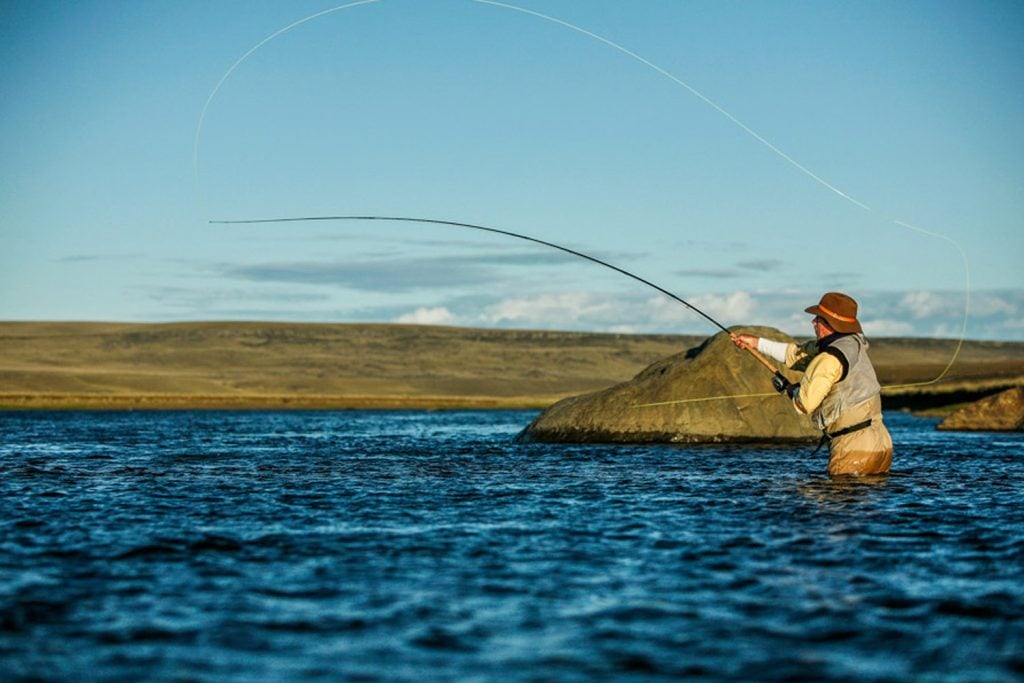 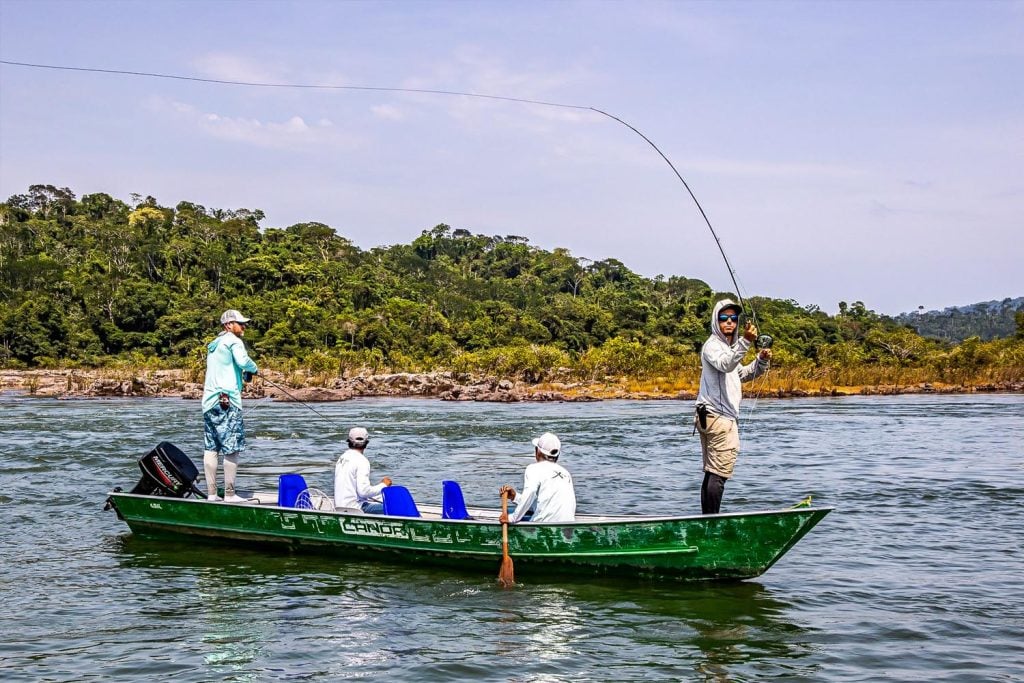