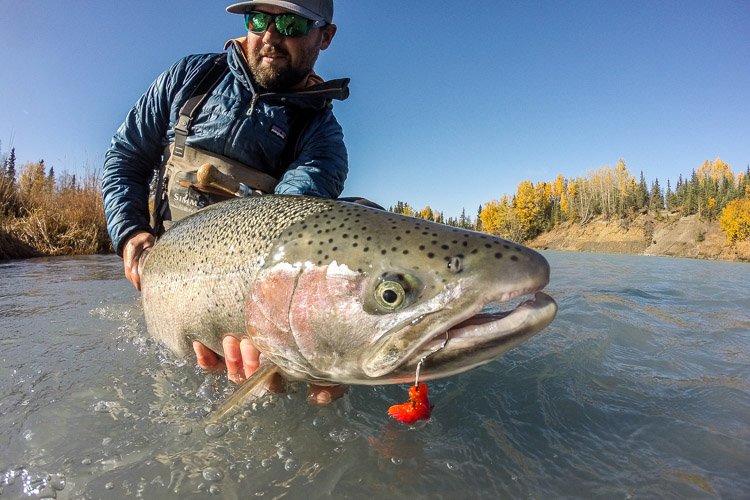 Steelhead are an anadromous form of the Rainbow Trout that inhabit Saltwater areas around the world. These fish are targeted by many anglers who love the fight these fish can give on light tackle. Add to this the stunning silver colouration the Steelhead inhabits then you can see why anglers head out to catch Steelhead and then release them after taking a photograph as they can make for a truly exquisite picture on the bank.

The freshwater form of the Steelhead Trout is the Rainbow Trout and the only difference between these two species is that Steelhead migrate to the open ocean and return to freshwater tributaries to spawn and Rainbows stay in freshwater. Steelhead are also larger and a lot less colourful than Rainbow trout and Steelhead can weigh a lot more with some specimens reaching up to 55 pounds in weight. The body of the Steelhead is silver in colour and streamlined with a much rounder head than the rainbow trout, they also have black dots and a red or pink stripe running horizontally down the side of the fish. It is this silver colour and rounder head that gives the Steelhead its name.

Steelhead reach sizes well over 50b in weight but the average size you will find is normally around 8lb.

Where to Catch Steelhead Trout:

Steelhead are an extremely widespread species now, inhabiting many saltwater estuaries worldwide. Even though they can be found in many estuaries, rivers and streams around the world there are areas that can produce much larger specimens than others and these places can be found on our dedicated Steelhead page.

Steelhead are normally targeted by using fly fishing methods. Casting different types of flies to rising fish is an extremely productive method with dry and sinking flys all accounting for many fish. Spinning with lures that imitate small fish including mepps spinners is another great tactic to ensnare Steelhead, one thing is for certain, once you have experienced the thrill of Steelhead fishing you will want to keep coming back for more.

If Steelhead fishing sounds like your type of fly fishing holiday, head over to our Steelhead page to see our full catalogue of exciting destinations and tours available from Sportquest Holidays or why not have a look at our dedicated Steelhead playlist here. Already have your heart set on one of our tours? Contact us today and we’ll take care of everything to get you catching one of these monsters yourself.