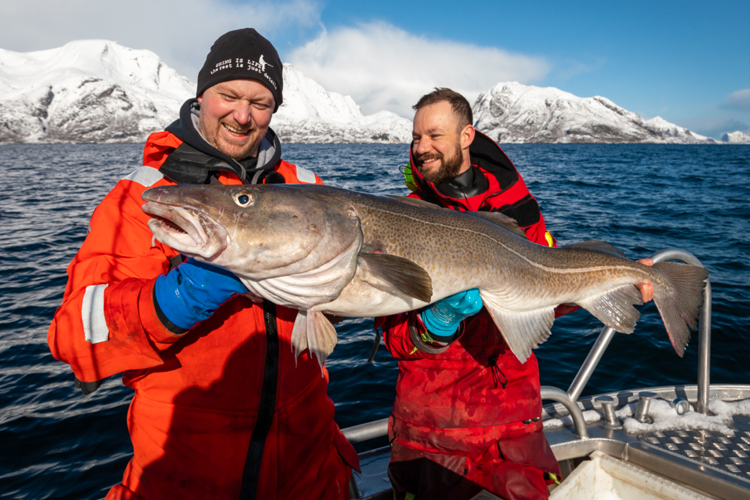 Its great to see even in days where things look slightly quiet, the guides over at Nordic Sea Angling almost always manage to put some cracking fish on the boat! Ill pass you over to the guides! –

This week we have had a visit from Matti and Florian, two Germans who live in Norway; Matti works as a fishing guide a little south and Florian is a good photographer and film producer. Their goal is to show off the Skrei fishing from Lofoten, which has not been the best this year as the Cod have not been here in the large quantities that we are generally used to. With that said, we went out the first day on the south side where we previously know has been difficult this year but when the weather limited us, this was our only option.

As a guide in this situation, you naturally feel that you have pressure to deliver, especially when Florian is with the film camera ready. We left the harbour at dawn, and after a 20 minute drive, we arrived at the first place. We start looking for the fish, and quite quickly, we saw some fish. We stopped, and immediately we both hooked up to a Skrei. All of a sudden, the sonar fills with Skrei. The depth was around 65m and it was packed with fish from the bottom and up to 40 meters below the surface. It was non-stop action, so we rejoiced with happiness! We landed many great fish over 10 kg, with a double hookup on two nice ones around 15kg. Not long after that, Matti landed the biggest of the day at 17kg, a huge post-spawn Skrei that was incredibly long but unfortunately did not carry the weight.

When we felt satisfied with the first day’s results, we focused on the Halibut fishing the next day. In a very short space of time I hooked into a nice fish on the Crazy Daizy, 400g and rigged with a curly tail. A bait that rarely fails. It got a little stressful in the boat when Florian’s drone started to run out of battery at the same time as you want to use the boat during the fight. But everything went smoothly in the end with some cool shots being taken and the day’s first Halibut in the 97cm boat.

Not long after, Florian had a follower when he spin-fished, who followed right into the boat. Not long after, it chops again on our rod rigged with baitfish. This time the circle hook fits perfectly and we could be proud of today’s second Halibut. An approved second day even though we had wanted to catch a larger Halibut. But we have more days left so anything can happen. Yesterday, I was out on a 4 hour guided tour where we then went back to the Cod position we had had the good fishing 2 days earlier.

The first thing we meet is a herd of killer whales, which was a fantastic experience where neither Janne nor Christian had experienced this before. A perfect start to the day. But once there, I could quickly see that there was no screaming here anymore. We searched for the fish at all depths and tried to cover as much water as we could. But after 3 hours of trying, we decided that we can only give up this time, so we put the last hour on Halibut instead.

When we only had 1 hour left, I had to choose the place with care and not long after, Vibeke stood with a bent rod and could now be proud of the first Halibut of her life! What a success! To have only one hour to direct the fishing for Halibut is really not easy and to succeed then just feels fantastic! But then Vibeke at the end of the same operation, hooks on another. We really could not have hoped for more. But there she was now again with a bent rod and this time with much more weight in it! A hard fight later, we also land the one that was measured to 93cm! But after 3 hours of trying, we decided that we can only give up this time, so we put the last hour on Halibut instead.

The fact that we also had two large Sea Eagles circulating around us before we went into port only made this day perfect!