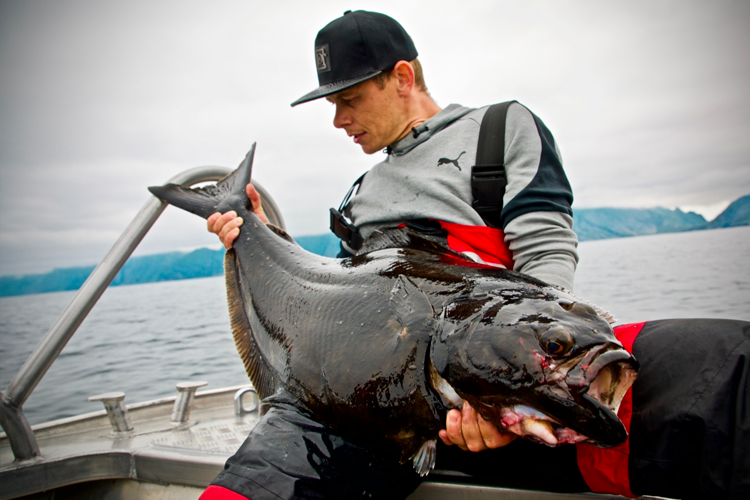 What a wonderful week it’s been out on the waters surrounding Nappstraumen, This week saw a new seasonal record along with some fantastic Halibut being landed!

A New Seasonal Best and Long Trip for Cod

Finally, it was time again for a long trip in the deeper water, the focus was on a relatively unfished area this year and the focus was on getting a lot of fish. Me (Daniel) and Calle steered the boats at 8 o’clock in the morning towards the intended fishing area and on the way down you could really feel in the air that it would be an absolutely incredible day.
I drove boat 7 with a bunch of Dutch anglers, who got off to a really good start on the day when we only got the baits into the water before Cod between ten and fifteen kilos just threw themselves over our Crazy Daisy in both 300gr and 400gr size. For a while it almost looked like Coalfish that was chasing in the open water and almost up to the surface, but no, it was big Cod, and after really speeding up the jigging it was enough to just drop the baits just below the boat to hook in a large Cod.

After a couple of really nice drifts over the same stop, we decided to pick up some baitfish to give the really big Cod a chance. Once we had stocked up, we went up on an 11-meter stop and threw in our Coalfish hooks, immediately hooked up the small Coalfish and Mackerel and on the way up the big Cod, we could finally throw out our anti-twist with Mackerel and Coalfish as bait and at a depth of 20 meters the Cod started hitting, a bunch of delicious Cod over 15 kilos were landed and after a while we were able to land today’s top fish of over 20kg!

Our Danish group who also fished in the same area, had an absolutely incredible fishing day where many large Cod were landed and a couple of Halibut with the largest around 120cm. They could also be proud of a really nice cod of 22kg.

In boat 7 we decided to try for Halibut a little shallower and after just under 20 minutes we can see a Halibut rises on the plumb line to meet our bait fish and soon after it slams on, after a really fun fight with several rushes up and down from the bottom we could land their first Halibut with a length of about 115cm, really fun!

Then it, unfortunately, became really bad weather and the fishing had to be all out on the last day of fishing where it was Halibut that was in focus. The boats went out early in the morning and the best boat for the day was clearly boat no. 6 with the Danes where they landed a bunch of steady Halibut with 120, 130 and 138cm at the top.
Our Dutch guests also got a really nice one of 130cm. For me and my guests, we had a relatively tough time with only a lot of climbs, but after a while of wear and tear we were able to land a smaller and a nice one in the 120cm class.

It should also be added that this week a bunch of nice Plaice came up a stone’s throw from the fight with an average of 53 cm and an absolutely incomparably nice top fish of 63cm.