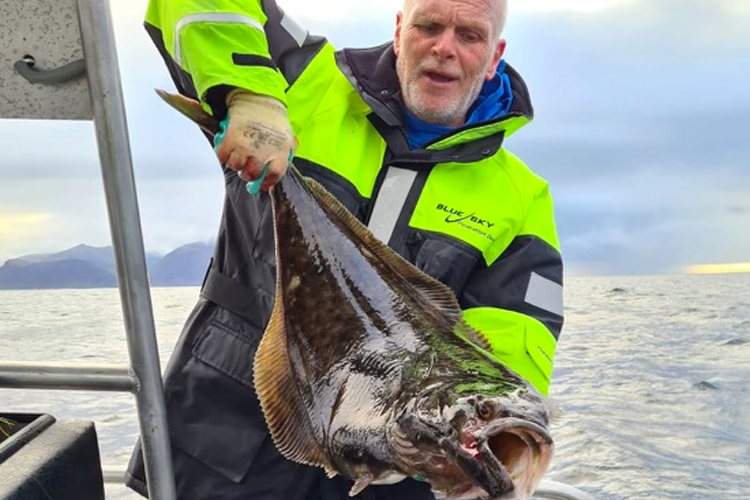 Another fantastic week in Nappstraumen for the anglers there this week. This week saw a mixture of both lure and bait fishing with both methods producing some remarkable Halibut up to 181cm!

The past week has really offered some fantastic Halibut fishing in shallow water, lure fishing and live baiting with Coalfish and Mackerel as bait has been the right method for our captures.

The week started with difficult weather and the opportunities to move freely were unfortunately not available. Therefore, the fishing had to be limited to the Nappströmmen itself, but what does that mean now that the water temperature has dropped, the Halibut move just outside the cabins! The first day offered a bunch of Halibut in food size for all boats with two fish around 130-140cm at the top. We had the best fishing in shallow water between 8-12 meters deep and spin fishing was clearly by far the best method.

The second day we went to a nearby stream and made an attempt at spin fishing there too, and after a few hours, the boats landed a bunch of Halibut. Daniel who drove the guide boat that day had just started to roll towards the next bay when the silence on the VHF is broken by a shaky voice that tells that they hooked something big while spin fishing, I turn the boat and set course for their boat and when I arrive it almost looks like they are stuck in the bottom, I jump over in the boat to study it more closely, Bram who hooked the fish asks me to feel the rod and after a little while of silence when I try to put pressure we see how the line is steady starts to roll out of the reel followed by some really nice long swings, finally a better fish! The minutes run away and the fight in the small water system really put the boatman’s skills to the test, it was probably no wider than possibly 20-25 meters in the water system and after the fish started to get tired after about an hour after I jumped into the boat, I managed to help land a completely crazy wide and thick Halibut of 182cm! Big congratulations to our Dutch group with Bram at the front who was in charge of the drilling of the fish. Could this be the biggest Halibut on lure fishing gear? In any case, it is a huge fish on spinning equipment at a depth of just under 8 meters!

Day three we set course for a completely new area for us, the idea was clearly a really big Halibut! We met the guests at the boats at dawn and could really feel in the air that it was going on! On the way to this area we stopped to catch some baitfish, about 20 Coalfish and also two Mackerel later we started the journey towards the fishing area. Once in place, it immediately felt really good and barely 10 minutes into the drift, we land the first of the day, just before Calle could report a Halibut in their boat too. After that it got a little sluggish with some fish in the meter class in the other boats. I then decided to roll towards the next edge and already within the first drift, we got to taste a good double bite. It was then time for new drift again and this time I laid it even shallower, at 8 meters! Two minutes go by and then it bites on one rod, we set the hook and a second later a fish hits on my rod, and it is BIG. I gave the rod directly to one of the guests in the boat to give him the opportunity to feel really heavy fish. After an intense fight, we were able to land a really nice fish of 171 cm!

After that we drove the same drift again and in the exact same place, when we looked down at our bait fish 6 meters under the boat, we see a brutal fish come up and take one of our baitfish, such a cool experience but after that, unfortunately, the line went, but approximately one fish that was not too far from 2 meters…

After that, the fishing died and we changed places, 10 meters on a small platform, feels hot! We lowered the baitfish and then started spin fishing, and at the end of my cast, I see how a really big flounder starts chasing my sandy andy in 150g all the way to the boat, after trying to get it to bite it sees the baitfish a few meters below us and manages to catch both the baitfish on my rod and a guests rod, so we stepped and double-drilled a really big fish, after the Halibut had to confess defeat to two fishermen with a lot of adrenaline, we could land the next fish at 153cm! Bram who has not managed to hook any fish this day sits and just laughs in the boat and starts to crank in his jig that he had thrown out, bang the next Halibut was hooked, at around 80cm.

After that, the fishing and the current died down a bit so we felt it was time to roll home again after a completely crazy fishing day!

After the amazing fishing on Sunday, the fishing continued to be stable with Halibut every day in all boats with a couple of nice around 115cm as the largest.

For now, Calle and I are sitting and drinking coffee, we are soon going out on the water a couple of hundred meters from the camp and praying for some intense fishing again!