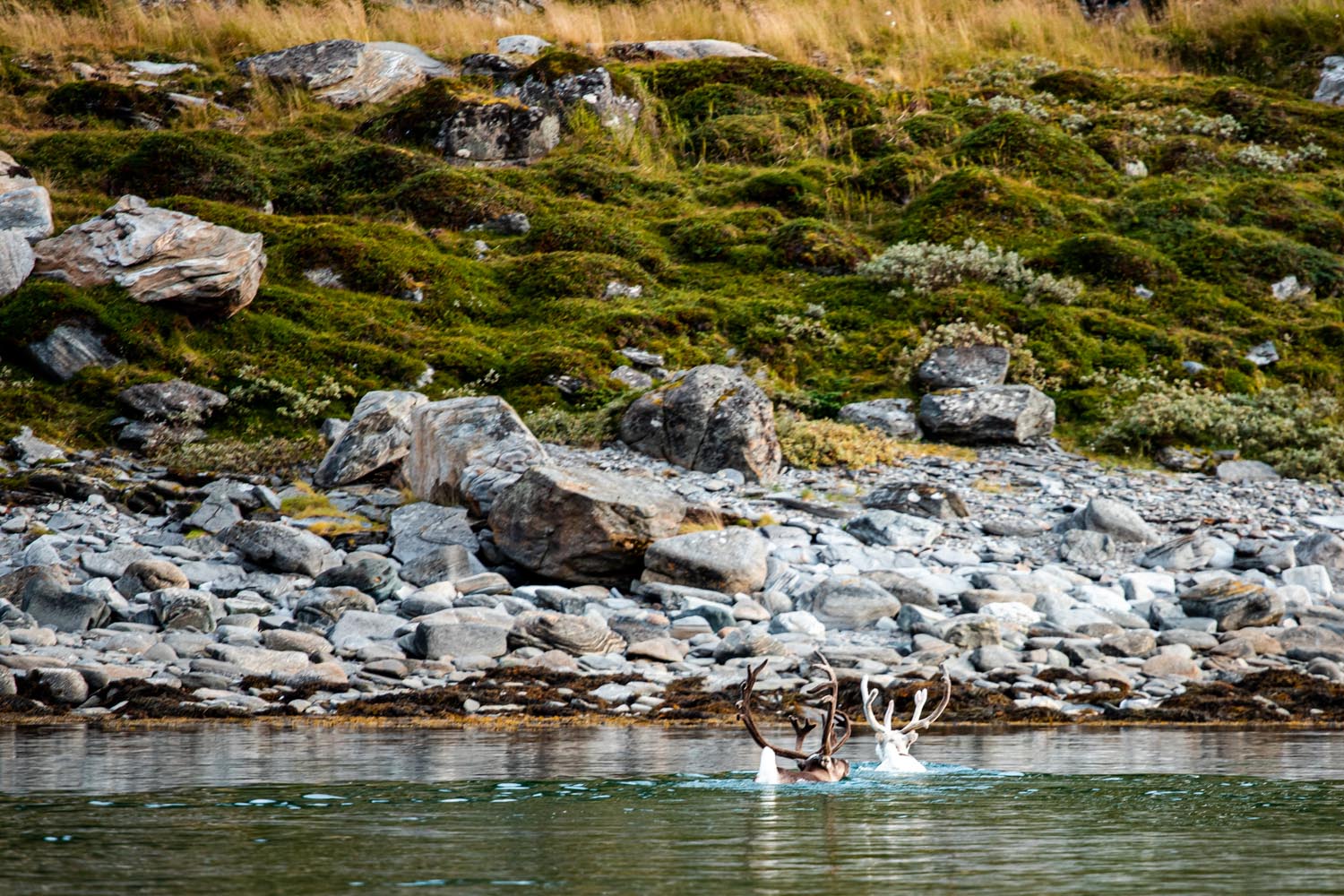 The past week in Havöysund has offered us some really nice weather with both heat and sun. The fishing has been varied and we have tried a few different species. During our first day of the week, we drove in slightly different directions and mixed between Cod and Halibut. The guys in the guide boat managed to find some Cod and Haddock, but otherwise the Cod fishing was really down and it mostly felt like the fish weren’t actually there, but in the middle of the fishing, it actually nibbled a bit, so one of the guests in the Guide boat got a really good bite and the fish started bowing heavily and then pulled away in a brutal rush, there was no talk of it being a Halibut, but unfortunately with a bit of a tight line angle and the spear put under full pressure against the rail, so he Andreas did not advance before the spear narrowed in the middle and the line went off…

During our second day it was a day of long travel and after the first day which proved to be less productive in terms of catch, the hopes were that this would bring back the spark in the lads. Halibut fishing was on the schedule and the conditions were perfect. It didn’t take long on the first drift before it started to chop in my boat and we pulled a couple of fast smaller fish on spin fishing, the same thing followed for the boats around and we had a nice period of about an hour where some Halibut came up to 120cm, but then they died off and we looked further. It took until we had some good current on the falling tide before we started fishing and even then managed to pull a number of Halibut between the boats with top fish around 20 kilos.

During Sunday we headed to an area with more current which I thought should be hot as we initially had really low current at the beginning of the week. In my boat I had Charlie 10 years old who made his life’s first sea fishing trip and he was excited to catch his first Halibut. We mixed between a little jig fishing and angling, Charlie drove with a 300 gram 4D Herring in mackerel color that he firmly believed in. During the first drift it was mostly rigged and fixed, so when we finally got going I told Charlie that “now I’m going to put up my absolute favorite drift” which he thought was an absolutely excellent plan. It only took a few minutes after we drifted towards the edge before Charlie shouts to me that he’s stuck at the bottom and I immediately understand what he was talking about so I run up to him and shout for him to counterstab as hard as he can , it got really heavy and I had to grab the rod quickly to adjust the brake and pull to make sure the fish was hooked hard. Then when I take over the rod and press the fish quickly, the reel attachment on his rod snaps off and the reel was now rotating freely around the blade on the rod, which complicated the whole thing a bit. Charlie was quickly back on the rod and tackled for king and country, after the fish had offered a couple of heavy swings it began to push away in an incredible rush, Charlie’s dad had to step in and assist Charlie with helping hands during the fight to keep the reel in place while they, in a unique way that I have never seen before, got to rescue this fish and fight it father and son together.

The fish offered repeated rushes and the boys fought for their lives while the rest of us and the boats around stood and cheered. Finally the fish came up and I was able to land it and measure the first Halibut of Charlie’s life at 152 centimeters! And as a 10-year-old, not only catching a Halibut, but also stepping over the 150cm distance in one go is just absolutely fantastic. The joy was total when the boys got to release the fish back and watch it swim down into the depths again, but the fishing continued and we weren’t done yet. A while later after trying a few different drives Charlie was up and running again, this time with a completely new rod, and when we just drifted up onto a nice plateau, Charlie’s jig got really tight and he had to hold everything he could. The boys were very keen to catch food-sized Halibut and of course Charlie would be responsible for that as he nicely pumped up a great Halibut of 92 centimetres. The fishing was very tough for the other boats and there weren’t really more flounder than the 2 that Charlie caught, so he really showed all the boats where the locker should be. One by one the boats left the area to try and catch some Cod, and towards the afternoon we too when not much else happened. The Cod fishing was still tough, but after a lot of kneading, we finally managed to catch a bunch of food-sized Cod up to around 7 kilos.

The next day the winds started to blow over the area and the fishing had to be spent in the immediate area, some chose to stay on land completely while others gave it a try but unfortunately without any further results as there were tough conditions. This led us into the following day when it took hold really well and the winds pulled in between 20-30 m/s throughout the day so we were completely blown away. The positive thing about it all was that Wednesday then looked really nice and it seemed like we were going to have a nice end to the week. As a team on Wednesday, we headed towards an area in the hope that the Halibut were on the attack, mixed methods such as spin fishing, traditional jig fishing and angling with smaller bait fish were on the schedule and when I set up for the first drift of the day, he and I barely saw stop before Andreas in the guide boat that had stopped just before, call out that they are playing Halibut. Everyone tackled and just a few seconds after Micke got his bait fishing to the bottom, it sucked for him too, Micke who was still waiting for the first Halibut of his life now finally stood with a strongly bent rod and got to feel the incredible power of a really nice 106 centimeters.

Seconds later, David’s rod also pulled away as he was also waiting for the first of his life, but unfortunately he burned it. The boys were lyrical about the terrible start and it would be better when soon after that it rips away again for David, but this time it stayed and he had a really fun fight with a nice 115 centimeter Halibut. The fishing continued for a little while under this direction and Jonny and the guys in the boat next to it managed to pull a cannon Halibut of 138 centimeters which became the biggest in the bay.