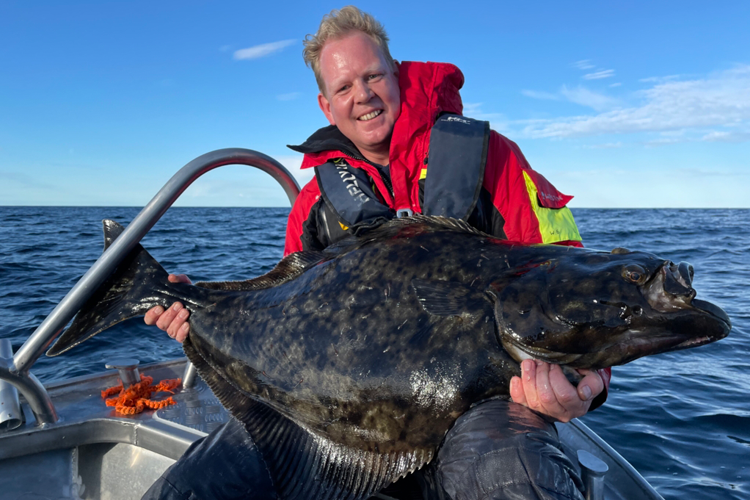 Over the last week or so in Nappstraumen, the fishing has been a little varied in terms of results, but all anglers have enjoyed some magical days landing plenty of nice Cod, Halibut and Plaice.

Here in Nappstraumen, the last week has been good, with lots of nice Halibut and Cod falling to most of the boats. On one of the best days, a team of Dutch anglers enjoyed a great day’s Halibut fishing landing eight, with the biggest measuring in at 160cm. Amazingly, all these fish were hooked within 20 minutes of the camp and even as close to 150m to the shore. Fishing the same ground, our guide Daniel also landed a cracking Plaice of 62cm.

One highlight of the week was guiding Gabriel, who won Sweden’s master chef, and his friends Mattias, Fredrik and Marcus. We started the week with a long trip out Halibut fishing, and after around what seemed like a million drifts, Mattias hooked into his first-ever Halibut. After a somewhat chaotic fight, a fish of 107cm was soon measured and released. The happiness and good feeling on the boat was unreal!

Unfortunately, after that fish, no more followed, so we changed tactics and went to find some Cod. After searching, we eventually found a massive school of baitfish in a channel between two shallow peaks. The fishing was fantastic with one Cod after another; Fredrik landed the biggest of the afternoon, a chunky fish of just over 15kg.

On the last day with Gabriel and the gang, they decided they just wanted to target Halibut. After collecting some baitfish, we rigged up and started fishing, and it wasn’t long before the first action of the day. Within 15 minutes, Fredrik’s rod bent over, and his reel began to sing. Soon the first Halibut in the day, a fish of 87cm, was measured and released.

The main bulk of the day was relatively quiet, and we’d lost a few fish before Fredrik was in again, landing his second Halibut of the day, a fish just slightly smaller than his first one, measuring 83cm.

Unfortunately, after this day, we were blown off for the rest of the week; with wind speeds over 30m per second, it was pretty much impossible for any fishing.

Yesterday, with an improvement in the weather, I ventured out for some Halibut fishing. Unfortunately, the day started very slowly as there was minimal current, and the water was super still. Nevertheless, I managed a good few Cod before the tide eventually picked up. As soon as the current started to flow, I hooked into a nice Halibut, and within a few seconds of playing it, I was sure it was a big fish. In only 20m of water, the fight was crazy! After 20 minutes of toil, I finally brought the fish to the side of the boat; it was a magnificent creature that measured in at 162cm – I was thrilled with such a dream fish! After a few pictures by the side of the boat, I watched her swim back down to the depths.

After my fish, we moved to a slightly different area and found another big, beautiful Halibut, this time a fish of 142cm. It was another explosive fight, and the expressions on the anglers face was priceless – an actual dream come true moment.

We are now waiting for the next guests to arrive and are full of anticipation as to what the next week will bring.