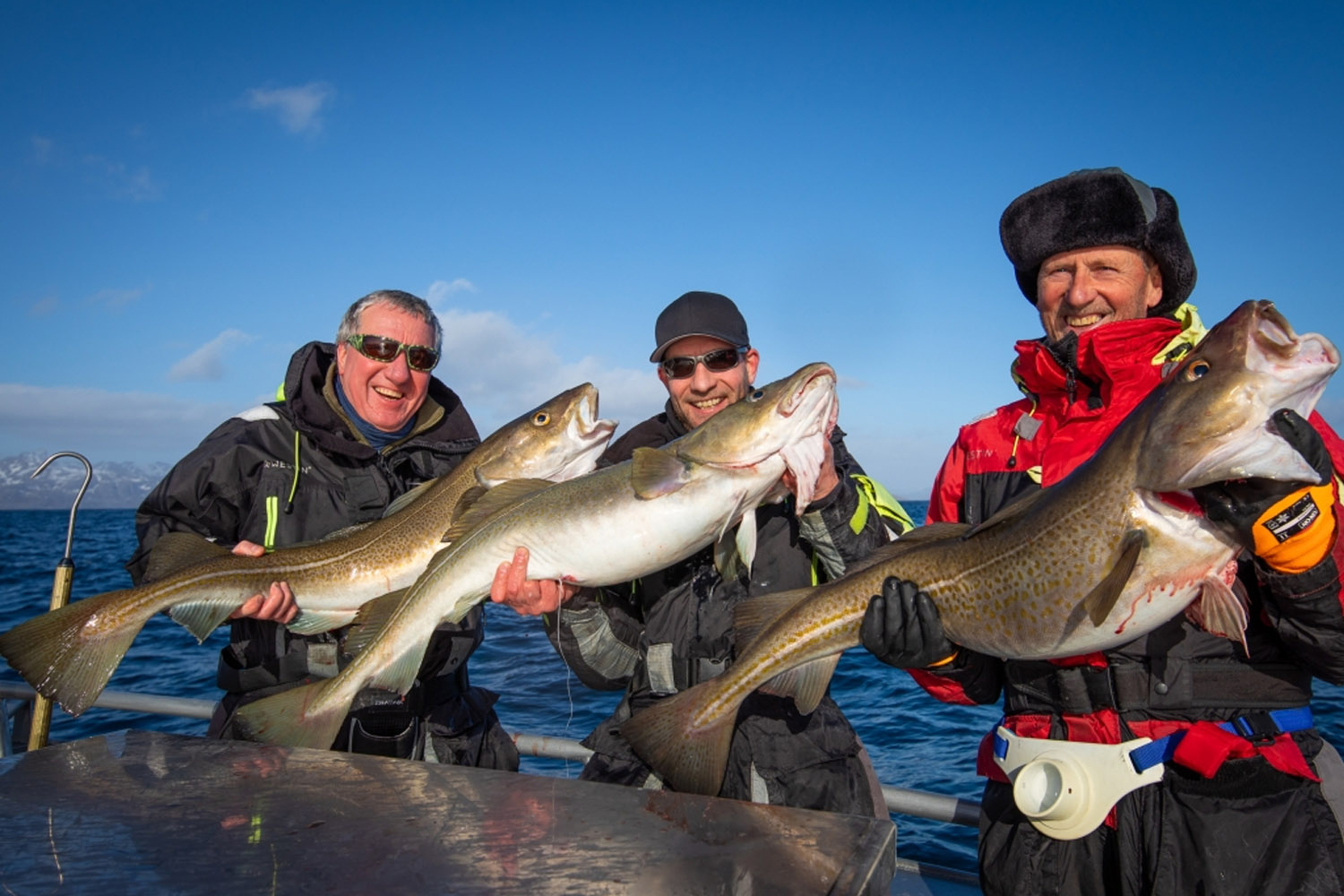 This time of year at Nappstraumen usually has unpredictable weather, with strong winds one day, and sunshine and calm sea the next day is something we are used to. However, this week we have had a gale or storm throughout the week with only two days with the opportunity to fish for Cod.

Monday was the first day that the wind went down to 9-5 m / s, meaning we could finally go out on the south side in search of the Cod. Once out at sea, we were met by big waves, which slowed down more and more during the day. We managed to find a larger shoal quite quickly, which turned out to be a shoal of Haddock. Some Cod were also caught here as well, but shortly after, boat 10 with Captain Svicke calls that they managed to find a really nice shoal of Cod and landed several nice ones in a short time. We called the other boats and went there in a group. Once there, we could fish sporadically with fish in the area, and some fish were landed on the other boats, but quite soon after, this shoal was also gone.

We spread out the boats again, and in a similar fashion to earlier this year, it was very difficult to find the really big shoals of Skrei. We kept in touch with the boats during the day, but it was mostly “caught a little now and then distributed over the rest of the day”. Those who fished best, were those who actively searched for the fish and who were quickly down to dot the small shoals found. The boxes were filled with fine Cod, even though it was difficult to fish.

The last day at sea was windy again, but it was still possible to get out to sea, and Calle who steered the guide boat said that it was really hard to find the fish at first, but just before they were planning to go back to shore, they found one massive shoal, where all the guests hooked up with a nice sized Skrei Cod for about half an hour. Calle also called for the other boats where some had time to take part in this excellent fishing.

This is the normal way it is during Cod fishing. Most of the fish were around 8-10 kg with a peak of about 13 kg. We also heard about someone who landed a 20kg+ fish this day as well as this year’s first “Coffee Cod”, i.e. one over 30kg, from some other anglers in the area. So maybe the Cod are now entering in a larger shoal; that is at least what we are hoping for. According to reports, large shoals of Cod have stayed further out at sea where large concentrations of Herring have been found. So now we just hope that these shoals move closer to the coast so we can take part in the fantastic fishing that Cod fishing usually is. Some of our guests were also visited by a herd of Killer Whales, a nice feature on the fishing trip and a nice end to the week.

Despite unusually tough weather, most people go home with nice Cod in the box and the longing to come back and get revenge on the Cod fishing again.

Thanks for this windy week, now we are charging for a new week with new guests!